‘The Mysore Bhagavata’ is perhaps the only surviving manuscript of the royal atelier of the Wodeyars of Mysore and a rare representation of the ‘Mysore style’ of painting that developed during the reign of the Krishnaraja Wodeyar III (r. 1799-1868). Commissioned by the Maharaja of Mysore as an act of devotion, the story of the ‘Mysore Bhagavata’ is as spectacular as the art within it.

The treasured manuscript, which we justly refer to now as The Great Mysore Bhāgavata, and to which the present study is devoted, was once in the library of the royal house of the Wodeyars of Mysore. It must have lain there— quietly, but in great company, the library having been extraordinarily rich in manuscripts, once—for close to a century and a half, but in April of 1982, it appeared on the market in England. It was shown in an exhibition, titled Indian Painting: 1525–1825, mounted for David Carritt in London, arranged and catalogued by the scholarly art dealer, Terence McInerney. There were a number of other objects in the exhibition of course: this manuscript bore the no. 36, and was described, crisply and with great precision, by McInerney. This is exactly how the entry began:

215 illustrations (some unfinished) in opaque watercolour heightened with gold

Library Stamp: His Highness/Rajah of Mysore

A longish description, accompanied by two illustrations—one in full colour and the other in black and white—followed these physical details, including a short note on the royal house of the Wodeyars, who had finally returned to power after the defeat of Tipu Sultan by the British, and on the remarkably little that was known about Mysore painting till then. McInerneny spoke also of the ‘dramatic vitality, dynamic rhythm and pictorial imagination’ that marked the best examples of illustrations in this manuscript.

Soon afterwards, Edwin Binney III acquired the manuscript, adding it to his already rich collection of Indian paintings, and it stayed with him till, like the rest of his collection, he donated it, in all its splendour, to the San Diego Museum of Art. There it has remained, bearing the number 1990–1402: shedding grace.

The subject of the manuscript is that great and ancient religious text, the Bhāgavata Purāna, and we know that it was written and illustrated for the Mysore ruler, Mummadi Krishnarāja Wodeyar (born 1794, died 1868; period of effective rule 1799–1831). Commissioning it must undoubtedly have been an act of devotion. For everyone involved in producing the volume must have known of the elevated status of the texts, since the belief goes: ‘Just as the Ganga is the foremost and the holiest among rivers … just as the holy place Kashi is unexcelled in all the sacred places, similarly, out of all the Purānas, there is no Purāna which can equal Shrimad Bhāgavata.’ Unfortunately, however, the information we have on the circumstances, the occasion, for undertaking the production of this manuscript is severely limited. Nor do we have any other hard information. We know nothing thus of the scribe/s who sat down to write this extensive text; nothing is known about the painter/s who embellished it with as many as 215 illustrations. No names have survived; there is no colophon, not even a simple date. The fact that this volume covers only the latter half—uttara-ardha—of the celebrated Tenth Book of the Purāna raises the presumption that there must have been another volume, now lost, treating of the first half, the purva-ardha, of that text—widely seen as the more attractive or popular part, since it deals with the childhood and the seductive deeds and miracles of Krishna—but nothing is known of it. All that we have by way of information in the present volume is an impression, on one of the opening folios, of the royal seal of this learned ‘Rajah of Mysore’.

Krishnarāja III, Patron of the Arts and Letters

While Krishnarāja III’s donations of tax-free land grants was abruptly halted with the commencement of the Commissioner’s Period, Krishnarāja III’s patronage of the arts, including music, literature, and painting, flourished. Indeed, his support of the arts earned him the nickname abhinava bhoja or the ‘New Bhoja’ after the legendary Rajput king, who is often considered the exemplary model for Indian kings and artistic patronage.

Indeed, the reign of Krishnarāja III gave rise to more Kannada literature and music than any Wodeyar king before him. Krishnarāja III patronized many court poets, including Aliya Lingaraja Arasu, Kempunarayana, Devapalapurada Nanjunda, and a host of others whose contributions mark the transition into new modern Kannada literary forms. His court employed renowned musicians, like Sadashiva Rao, Vina Venkatasubbayya, and Shunthi Venkataramanayya. Seeking to build the musical reputation of his court, Krishnarāja III recruited many notable musicians who had worked in the Tanjore court of Serfoji II (r. 1777–1832). Krishnarāja III’s musicians were not confined to the court but also performed in temples either during special ceremonies or were appointed to a specific temple for daily duty. Krishnarāja III was also a great patron of dance, and during his reign dance gurus refined the local courtly dance style that has become known as ‘Mysore Bharatnatyam.’ Likewise many of these poets and musicians were also composers of yakshagana, a traditional form of theater. These yakshagana compositions were written in accessible, everyday Kannada and have been credited with popularizing Kannada theater.

The most prolific littérateur and composer of the Mysore court from this period, however, was the king himself. Krishnarāja III is credited with authoring fifty-eight literary works, most of which are devotional or philosophical in nature and include Kannada versions of Sanskrit texts, such as the illustrated Devimahatmye that, like the Bhāgavata Purāna, embeds Mysore-style painting to illuminate the narratives by showing the deity enacting the scenes of the text.

In addition to the literary and performing arts, Krishnarāja III employed a host of visual artists within his court. Many of the noted artists, like Tippanna and Sundarayya who were both principle in the creation of the murals of the Rangamahal in the Jaganmohan Palace, joined the Mysore court in the later parts of his reign and were supported by the king from his royal stipend. Like many of the musicians from Krishnarāja III’s court, the king employed painters, such as Tanjore Kondayya, who had previously worked in the Tanjore court before the death of Serfoji II in 1832. The migration of these visual artists helped develop what is commonly referred to as the ‘Mysore style’ of painting that incorporated elements of Tanjore and European styles during the reign of Krishnarāja III.

The battle continues: Shalva is slain by Krishna|Niyogi Books

The content and composition of several paintings, the illuminations of the San Diego Bhāgavata Purāṇa manuscript under discussion here share many affinities with the murals in the Jaganmohan Palace and others that are attributed to Tippanna and Sundarayya, who were active in the later years of Krishnarāja III’s reign and into the reign of his son Chamaraja X. Indeed, ‘Tippanna, the artist’ engraved and signed the copperplate inscription that served as the portable version of the Jaganmohan murals that included both verse and image. This suggests both that Tippanna was likely the superintendent for the mural project and that he was well-versed in working on projects like the Bhāgavata Purāna that included both text and illuminations. Additionally, as the editors of the 1938 Archaeological Survey of Mysore Annual Report note, the genealogy both painted and inscribed in the genealogical lotus mural in the Jaganmohan Palace ‘closely follows the traditional genealogy in the Bhāgavata,’ reflecting some familiarity with the text by the author/artist. 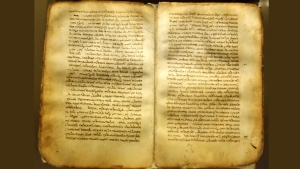 Dr Caleb Simmons is an Assistant Professor of Religious Studies at the University of Arizona.