What could the world’s greatest monument to love possibly have in common with a crumbling sarai or a rest house 700 km away in Punjab? The answer lies in the beautiful calligraphy that embellishes both monuments – the Taj Mahal in Agra and Sarai Amanat Khan, a rest house 29 km south-west of Amritsar, on the Tarn Taran-Attari road.

The calligraphy that adorns these and other prominent Mughal monuments across India was the work of Amanat Khan Sirazi, one of the greatest calligraphers of his time. But why would a Mughal-era master calligrapher lavish so much attention on a remote rest stop for weary travellers on the old Lahore-Agra Grand Trunk Road?

According to Encyclopaedia Iranica, Amanat Khan, whose real name was Abd-al-Haq, was originally a calligrapher from Shiraz in Iran, who had migrated to the Mughal court with his elder brother Afzal Khan in 1608 CE. There, he began working in the Imperial Library of Emperor Shah Jahan, while Afzal Khan soon rose to become Prime Minister of the empire.

Abd-al-Haq was a gifted calligrapher and his talent brought him recognition in the Mughal court. As a result, his work appears on a number of Mughal monuments such as the Koranic verses on the gateway of the tomb of Emperor Akbar at Sikandara and the Shahi Madrasa at Agra.

However, his most important project began in 1631, when Shah Jahan’s beloved wife Mumtaz Mahal died in childbirth at Burhanpur (present-day Madhya Pradesh) and the grieving emperor decided to build a grand tomb to forever mark his pain and suffering at her passing.

Calligraphy on the Taj Mahal|Derek A. Young

Abd-al-Haq was appointed to design the calligraphy on the mausoleum in Agra, which would be known as the ‘Taj Mahal’. Impressed with his work, Shah Jahan conferred on him the title of ‘Amanat Khan’ (‘Like an Heirloom’) and a mansab, a land title that ranked with the nobility, in 1632.

For six years, Amanat Khan worked on the Taj Mahal project, and the calligraphy inside the domed hall of the grand mausoleum was completed in 1638. Gaze at the base of the dome on the inside and you will see Amanat Khan’s signature, which reads:

Written by the humble faqīr Amānat Khan Šīrāzī in the year 1048 heǰrī, corresponding to the twelfth year of the auspicious reign [of Shah Jahān].

However, just as he had completed the grandest and most important project of his life, a personal tragedy struck Amanat Khan. His beloved brother, Afzal Khan, died in Lahore at the age of 70.

Afzal Khan, intellect, administrative abilities and mysticism, and his dedication to maximising economic productivity and the affluence of the people” had made him one of the most admired Vizir or Prime Minister of the Mughal Empire.

Shah Jahan as a token of respect for his favourite officer ordered his dead body to be taken from Lahore to Agra where he had built a rauza (tomb in Persian) for him built of Chini (glazed tile-work), and it faced Mecca. This beautiful monument is located a kilometre north of Itmad-Ud-Daulah’s tomb, on eastern banks of Yamuna River in Agra.

But Amanat Khan knew that his late brother, known for his religiousness would never have been fond of the fancy royal tombs, but what his soul would have wanted was to earn sawab or reward by good deeds for the needy.

British author W E Begley, in his book Monumental Islamic Calligraphy From India (1985) notes how deeply this impacted Amanat Khan, who in 1640 CE spent all the money he had received as a reward for his services to the Mughal court and for his calligraphy on the Taj Mahal, on building his own monument to love.

The sarai, today in a dilapidated state|Author

He built a sarai that was later named after him, and lavished it with elaborate glazed-tile calligraphy personally designed by him. This memorial to his beloved brother Afzal Khan was Amanat Khan’s last great work before he retired from duty and spent the rest of his life in prayer.

Begley mentions, “The old calligrapher spent his entire income in constructing a sarai or caravan inn in the outskirts of the Lahore city (today in TarnTaran district in Punjab, India) as a memorial to his expired brother, in an area which was once a part of the royal jagir which he and his brother once possessed prior to his retirement.”

It is said that Amanat Khan did not return to Iran on the request of his closest friend Ustad Ahmad, chief architect of the Taj Mahal.

Abdul Hamid Lahori, the contemporary biographer of Emperor Shah Jahan mentions in Padshah Nama (1656 CE) that Amanat Khan passed away in 1644-45 (Shah Jahan’s 18th regnal year) and was buried at the sarai itself, where he had spent his last years.

Sarai Amanat Khan is one of 35 caravan sarais on the Lahore-Agra section of the old Grand Trunk Road but what distinguishes it from other sarais across India is its arresting calligraphy. The sarai has two large gateways – Delhi Gate and Lahori Gate – where you can see these designs that contain Koranic verses. Today, only Delhi Gate is accessible, and on either side of the gate are two identical octagon-faced minarets that support the structure.

Inside the gateway is a courtyard that measures 500×500 square metres. A long passage runs through the middle of the complex, with rooms on either side. The rooms are of different sizes, and were allotted to travellers according to their class and wealth.

Some of the rooms have more than one chamber, and were likely suites with attached kitchens and washing areas. There must have been many more restrooms, common kitchens and reception areas that have long since fallen to negligence and encroachment.

The stable in the sarai|Author

Since animals were the only means of transportation in those times, the sarai has stables for horses, camels and elephants that still line the walls inside both the gateways. There were provisions for livestock as well. Included in the complex are a number of wells.

To the centre-left of the complex, is the mausoleum of Amanat Khan. It is in the centre of the courtyard with steps on all sides. On the top of the mausoleum are three circular domes and three doors that lead inside. Each door is decorated with calligraphy and floral designs. Inside the mausoleum, there are inscriptions on the main wall.

However, the tomb of Amanat Khan has been lost with the passage of time and locals started using the monument as a mosque.

Recently, the Archaeological Survey of India (ASI) discovered many new 15 ft × 20 ft cells inside the gateways, while a security tower in a corner of the outer wall near Delhi Gate has also been excavated.

Outside the complex, a few steps from Lahori Gate, is a ruined baoli or step-well. Since it is outside the complex, it is believed that Amanat Khan built it specifically for the local people, who had no other access to a water source. As was common practice in those times, there is a watch tower just behind the baoli, meant to ensure the safety of the step-well and the sarai. It is in a pitiable state today.

Not far from Sarai Amanat Khan is a Kos Minar, or a medieval milestone, built of red brick and coated with plaster. Much like modern milestones, it was one of a series of markers on the original Grand Trunk Road, placed every 2 miles or 3.22 km from each other.

After the fall of the mighty Mughal Empire in the early 18th century, the Grand Trunk Road, once the lifeline of trade in India, lost its significance. Political disturbances arose in the region, and the power corridor shifted away from Kabul, Lahore and Agra. The sarais along this route fell into disuse, and by the onset of colonial rule, Sarai Amanat Khan was all but abandoned.

But not for long. This historic monument was soon encroached by locals. In no time, an entire settlement sprang up here, with both shops and homes resting check-by-jowl inside these once magnificent premises.

It is said that when communal tensions arose between Hindus and Muslims in the area in 1926, the residents divided the sarai into two parts and each community confined themselves to their respective quarters till Partition in 1947.

Today, the structure is in a sorry state. The shiny painted calligraphy on the stone, which is the main attraction of this medieval monument, is fading rapidly. Many of the cells that once sheltered wayfarers and other travellers were demolished by another wave of encroachers, who have also destroyed the delicate lattice work in the windows of the gateways and the mausoleum by filling it in with concrete. 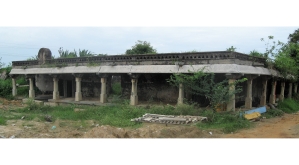 Sarai Amanat Khan’s guests today are only tourists who make it this far off the beaten track, its melancholic story only deepening with neglect while the other, more famous monument to love has been immortalised till eternity.

Taj Mahal Agra Punjab Mughal Shah Jahan Calligraphy
You May Also Like
History Daily
Moamoria Rebellion: The Revolution that History Forgot
By Mahasweta Dey
A 30 year civil war, a kind of ‘people’s revolution’, that hollowed out the Ahom kingdom from within
Amazing India
Finding the Indus Valley Civilization
By Anshika Jain
Catch the riveting story of the most significant archaeological finds of the 20th century
History Daily
Anjediva Island: Goa’s Unknown Treasure
By Yash Mishra
Discover the tiny island of Anjediva in Goa that has remained important for the last 2,000 years.
Living History
Emperor Jahangir: The Naturalist
By Anshika Jain
Read all about the wild obsession of a quirky Emperor, with his pets and other animals
Support
Support
Each day, Live History India brings you stories and films that not only chronicle India’s history and heritage for you, but also help create a digital archive of the 'Stories that make India' for future generations.