He was given the title, ‘Rashtriya Shayar’, or Poet of the People, by none other than Mahatma Gandhi. Sardar Vallabhbhai Patel praised him and said that his was a ‘voice full of courage’. The legendary Jhaverchand Kalidas Meghani truly was a voice to reckon with.

While you may have heard one of his most famous songs, ‘Mor bani thangat kare’ (My mind dances like a peacock), which was used in the 2013 Hindi film Goliyon Ki Rasleela Ram-Lila, and his words continue to dance on the lips of every Gujarati child, it is sad that the nation, whose freedom he so bravely fought for, seems to have forgotten him.

Jhaverchand Kalidas Meghani was a distinguished poet, writer, researcher, freedom fighter, journalist, social reformer, thinker, orator and singer from Gujarat. A pioneering folklorist, he plumbed the length and breadth of the region to unearth its forgotten folk cultures. And he used his voice and knowledge to rouse the masses against the might of the British Empire while also silently saving the dying voices of the country’s folk traditions.

An 1858 painting of Kathiawad|Wikimedia Commons

Meghani, who called himself ‘Pahaad nu Baalak’ (Son of the Mountains), was born on August 29, 1896, on the outskirts of a town called Chotila in what was then known as the Kathiawad Agency – a conglomerate of 200-odd princely states under the suzerainty of the Bombay Presidency, which despite once being known as the ‘country flowing with milk and honey’ (as documented by Capt Wilberforce-Bell in his book The History of Kathiawad, 1915), was a land reeling under poverty. Adding to the misery was a famine in 1899-1900, during which, it is estimated, 15 per cent of the population perished! Being raised at such a time must have had an indelible impact on Meghani’s sensitive mind.

Inclined towards literature from a young age, he wrote his very first poem when he was just 12. He went on to pursue degrees in both Sanskrit and English literature. In 1918, he embarked on his first job as a teacher in Bhavnagar but soon left for Calcutta to look after his ailing brother’s family. His three years in Calcutta ended up being a time of great inspiration as he discovered the writings of doyens such as Rabindranath Tagore, Bankim Chandra Chattopadhay and Dinesh Chandra Sen. Amazingly, Meghani even taught himself Bengali by reading signboards on the streets of Calcutta!

But his beloved Kathiawad was calling him back, and in 1921, he let go of a lucrative job to return home. In 1922, he married Damyantiben, and being a man who lived by his principles, he convinced his bride to enter her new home without her face covered – something quite unheard of at the time. On the professional front, he was grappling with the best path to take which would enable him to use his literary gifts in the service of the people. He sent two articles to the editor of the Saurashtra Weekly, who immediately asked Meghani to come on board. With this, he embarked on his journalism journey, one that lasted 23 years. Monday to Thursday he would devote himself to his editorial duties and then, come Friday and he would set off on his own to explore his beloved land and document its treasures.

From this point on, his writings, both in prose and poetry, etched Meghani’s name not just in the history books but also in the hearts of his countrymen. From 1927 to 1929, he painstakingly put together Saurashtra nee Rasaadhar (The Essence of Saurashtra), a set of five volumes of folk stories that captured the spirit of the land and its people. This was followed by Sorathee Baharavatiyaa (Outlaws of Saurashtra, 1927-1929), a three-volume series on 13 brave outlaws who took up arms against the British and the Princely States. These were pioneering publications which created a lasting impact, not just on Gujarati literature but on Indian literature as a whole.

Meghani at his desk|Pinaki Meghani

Years later, Meghani explained to a spellbound audience in Santiniketan, why he believed folk literature was invaluable. He said,

“The folk literature, in which the old face of Gujarat is minutely mirrored, has done for it what its history cannot claim to have done. There are details that History, the Man, does not care to preserve in his bundle of records, and which Folk Literature, the Woman, picks up and keeps in her humble rags.”

In 1928 came one of his finest works, Chaaran Kanya (Daughter of a Bard), a tribute to the valour of a young girl from the Charan community, a Scheduled Tribe whose members were once royal poets, renowned for their bravery and honour. Meghani devoted much time to the documentation of this community’s oral traditions, thanks to which we have a genre called ‘Charan literature’ today.

But Meghani’s voice was soon to rouse a much larger audience. On April 6, 1930, Sindhudo, a collection of 15 patriotic songs, was released. It commemorated the Salt and Dholera Satyagrahas. Such was the impact of his words being sung by freedom fighters all across Gujarat that the British government immediately banned the book and confiscated all existing copies. The revolutionary spirit of the people, however, ensured that his voice was not suppressed, and copies of the book were cyclostyled and circulated underground.

The British summoned Meghani to a special court on April 28, 1930, implicating him with false charges. He was sentenced to two years’ imprisonment in Sabarmati Jail but was released in a year after the Gandhi-Irwin pact, in which Mahatma Gandhi agreed to discontinue the Civil Disobedience Movement and join the second Round Table Conference. The British, for their part, agreed to release all political prisoners.

On the eve of his journey to England for the Conference, Gandhi was enveloped in gloom as he knew that the British were unlikely to accept his demand for complete independence. Meghani hurriedly wrote a poem for him titled ‘Chello Katoro’ (The Last Cup of Poison), in which he requested ‘Bapu’ to drink this last cup of poison for the nation. The poem was composed in the final hour and rushed to Gandhi just before his departure. On reading it, Gandhi immediately said: “Meghani seems to have entered my soul and fully captured my state of mind in this poem.”

It was then that he spontaneously gave him the title of ‘Rashtriya Shayar’.

Mahadevbhai Desai, Gandhi’s close associate, wrote about this incident in the weeklies published by Gandhi, Young India and Navjivan, and as the news spread, there was a nationwide demand for the poem. A special folio carrying the poem was issued by Saurashtra Press on the occasion of Gandhi’s 63rd birthday in October 1932.

While Meghani would always downplay the title of ‘Rashtriya Shayar’, saying it was merely an affectionate nickname given to him by Bapu, Manubhai Pancholi Darshak, a respected author and freedom fighter, felt otherwise. He wrote: ‘‘Mahatma Gandhi was very deliberate in what he said; Gandhiji claimed ‘I am mindful of every word I speak.’ What did Gandhiji actually mean when he called Meghani a national poet? A national poet, in Gandhiji’s opinion, was one who bridges the gap between the common peasant and the educated elite. Until this gap exists, a nation cannot stand united. Meghani tirelessly worked to erase this line of division. Gandhiji was able to recognize and appreciate this innate gift in Meghani.’’

In 1932, the Saurashtra Weekly was wound up and a new weekly called Phulchhab was launched, which Meghani joined. However, he soon suffered a personal tragedy with the passing away of his wife and decided to move to Bombay. But it was during this tragic period that the poet would finally meet his lifelong inspiration, Rabindranath Tagore.

The encounter took place thanks to the legendary artist Nandalal Bose, who had heard Meghani’s renderings of Gujarati folk songs and prevailed on Tagore to meet him. Meghani made such a strong impression that Tagore immediately invited him to Santiniketan. He finally managed to visit in 1941, and delivered four lectures to packed audiences on Gujarati folklore, which were later published in the Viswa Bharati Quarterly.

Meghani later went on to marry Chitradevi, a child widow of Nepali origin in 1934 and moved back to Gujarat in 1936. Here he resumed work with Phulchhab and continued to write as well as deliver lectures on folk literature to students across the country.

The revolutionary poet was constantly engaged with the freedom struggle and, like all the other great nation-builders, was increasingly perturbed by the rising communal violence across the country. It was perhaps this distress that caused a heart attack to claim his life on March 9, 1947. Meghani was only 50 years old when he breathed his last. Sardar Patel captured the mood of the people when he wrote:

“Meghani’s sudden passing away has left Gujarat with a tremendous and permanent loss. The only consolation is that he knew that independence of India — for which he fought all his life — is inevitably coming soon.”

The house where Meghani was born has been converted into a public museum by the Gujarat government. It holds curated exhibitions on his life and work by his grandson Pinaki Meghani, who is also the founder of the Jhaverchand Meghani Smruti Sansthan and is tirelessly working towards preserving his grandfather’s legacy. 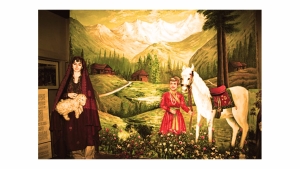 Although it is true that the words of a great poet such as Meghani will forever live on, a true tribute to our great bards of freedom would be to reinstate these now regional voices back into the national narrative. A good place to begin would be a project to translate Meghani's poetry into English – there is not a single authorised translation yet!

Gujarat Freedom Struggle Mahatma Gandhi independence Poetry Gujarati Vallabhbhai Patel Folk Literature Folk Culture
You May Also Like
Snapshort Histories
Discovering Amritsar’s Secret Tunnels
By Aashish Kochhar
Amritsar holds a dark secret waiting to be told–a network of underground passages that dates back to its bloody past
Snapshort Histories
Revolt of 1857: The Tragedy of Kanpur’s Massacre Ghat
By Swapnil Tripathi
On the banks of the Ganga in Kanpur is a ghat that was bathed in blood during the Revolt of 1857.
Cover Story
Pandemics Through Indian Literary Lens
By Saurav Kumar Rai
The biggest names in Hindi literature have put a human face to these catastrophic events
History Daily
Kolkata’s Victoria Memorial
By LHI Team
The Victoria Memorial of Kolkata is the most magnificent of all the memorials dedicated to the queen in the country
Support
Support
Each day, Live History India brings you stories and films that not only chronicle India’s history and heritage for you, but also help create a digital archive of the 'Stories that make India' for future generations.