He is the only person to appear on postage stamps in India, Bangladesh as well as Pakistan, and strangely enough, he wasn’t a statesman but a humble poet, whose life’s message was that of oneness and universal love.

Kazi Nazrul Islam, popularly referred to as ‘Bidrohi Kabi’, or ‘rebel poet’, was one of the most important voices of India’s freedom movement and a great source of inspiration during the Bangladesh Liberation War. But while Bangladesh has paid tribute to the power of his words by embracing him as their national poet, in India very few know of him outside West Bengal and Tripura, where his fame remains undiminished.

Born on May 25, 1899, in the village of Churulia in the Paschim Bardhaman district of the Bengal Presidency (present-day West Bengal), Nazrul was extremely sensitive even as a child and was nicknamed ‘dukhu mian’, or ‘sad one’. His initial schooling was in a madrassa, where he also studied Islamic theology.

His uncle ran a travelling theatre group and a fascinated young Nazrul found himself irresistibly drawn to it. It was here that his writing career unofficially took flight, as he began writing songs and poems for musical plays. He was introduced to a whole new world of folk and classical theatre, music and Bengali as well as Sanskrit literature, including the scriptures. All this was to play a huge part later in his revolutionary poetic outpourings.

Nazrul in the British Army|Nazrul Academy

Every phase of Nazrul’s life highlights both his childlike passion for learning as well as his unwavering humanitarianism. While serving in the British Army during World War I, he discovered Persian poetry through a Punjabi moulvi (religious scholar) in the regiment. Such was the impact of Hafiz, Rumi and Omar Khayyam on this young man that he went on to pioneer the ghazal form of poetry in Bengali literature.

However, this brief experience with the British Army also strengthened anti-colonial sentiments in Nazrul, who began working as a journalist in Calcutta, writing impassioned poetry and articles against all forms of oppression. His most famous poems of this time were Bidrohi (The Rebel, 1921) and Bhangar Gaan (The Song of Destruction, 1924). These words in Bidrohi are just as poignant today as they must have been back then:

“Weary of struggles, I, the great rebel,/Shall rest in quiet only when I find/The sky and the air free of the piteous groans of the oppressed.”

In August 1922, Nazrul started publishing a bi-weekly magazine called Dhumketu (Comet), which was openly critical of the British Empire. The first issue carried the blessings of poet and philosopher Rabindranath Tagore, a man whom Nazrul looked upon as a guiding light. Tagore too had deep affection for the young firebrand, which is reflected in these words: "Come, my comet,/Build a bridge of fire across the dark./Let your banner fly in triumph/Over the fortress of gloom./Be the night ever so full/Of dark portents,/Come, rouse those who live half asleep,/That they may wake up with a start."

The bond between the two was so strong that they would often dedicate their writings to each other. On Tagore’s 80th birthday, Nazrul wrote a poem for him titled Tribute of Tears, where he says: “While others regarded me as a mere manifestation of awe, you saw in me disconsolate cries...You alone realized that I was a comet shooting away from your orbit of light.”

Nazrul’s fiery writings were soon to draw the wrath of the British Empire and barely a month after the launch of Dhumketu, his office was raided for the publication of his political poem Anondomoyeer Agomone (The Coming of Anondomoyee [Goddess Durga]).

In January 1923, Nazrul was arrested on charges of sedition.

In April, he was shifted from Alipore Jail to a jail in Hooghly, where he undertook a 40-day hunger strike to protest the ill-treatment of prisoners. A worried Tagore wrote to him, saying, “Give up hunger strike. Our literature claims you.” He was released in December and had, in the meantime, written numerous revolutionary poems during his imprisonment, which were promptly banned by the British Raj.

Stamp issued in honour of Nazrul|www.istampgallery.com

One of the most remarkable aspects of Nazrul’s life was that he always walked the path of universalism, steering clear of any ideological traps. As he started getting more involved in the freedom struggle, he was as critical of the Khilafat Movement’s “hollow religious fundamentalism” as he was of the Indian National Congress’s hesitation to demand outright independence from the British.

But seeing the need to work on the ground, he did join the Bengal state unit of the Indian National Congress (INC). Here, along with Muzaffar Ahmed, Nazrul helped organise the Sramik Praja Swaraj Dal (Workers and Peasants Party), a socialist political party which worked within the INC from 1925-1929.

At the annual session of the Indian National Congress held in Krishnanagar in 1926, Nazrul sang what went on to be one of his most famous and prophetic songs, ‘Kandari Hushiar’ (Helmsman Beware): “In this dark night, o sentries of Motherland, be alert;/ This helpless nation is drowning – it doesn’t know how to swim’;/Helmsman, tell those who are drowning that they are no Hindus or Muslims, for they are drowning as human beings.”

Nothing disturbed him more than discrimination in the name of God.

In his poem Manush (Man), he rages: “Who are they--hating human beings/yet kissing the Quran, the Vedas, the Bible?/Snatch away those books from them./The hypocrites pretend worshipping those books/by killing the human beings who have, in fact,/brought those books into existence.”

No one was better placed to write these words than the man whose poetry simultaneously explored the philosophy of both Islam and Hinduism. Along with Islamic songs, Nazrul has written over 500 Hindu devotional songs. A skilled musician, he set his songs to Hindustani raga-based tunes as well as folk songs.

Amazingly, this gentle revolutionary also wrote a huge volume of songs and poems for children which are popular to this day. The 4,000-odd songs that he had written are collectively known as Nazrul Geeti and are sung across Bangladesh, West Bengal and Tripura.

Nazrul was also a man who walked his talk and his personal life was never at odds with his philosophy. His marriage to Pramila Devi, a Bengali Hindu woman, attracted criticism from both the Brahmo Samaj (of which she was a member) as well as Muslim religious leaders. The names this unique couple gave their children reflected this same progressive spirit: Krishna Mohammed, Arindam Khaled, Kazi Sabyasachi and Kazi Aniruddha.

The ‘comet’ was also well ahead of his times when it came to gender equality. His poem Nari (Woman) is a powerful manifesto for women’s emancipation and the fight against patriarchy. He writes: “Woman! Break asunder this dungeon of death/Let the enraged female power of the mythical Naginis be unleashed/Shatter your bangles/Becoming beacons out of darkness towards light/Show your Shakti by overcoming the guard dogs with one mighty thrust.’

Devoted to the love of his life, when Pramila fell seriously ill in 1939, Nazrul mortgaged the rights to his gramophone records and literary works for a sum of Rs 400 to pay for her treatment. Meanwhile, he helplessly watched as his dream of an independent, secular and unified India quickly turned into a nightmarish communal battleground.

He publicly wrote against the idea of Partition in 1941 in a poem titled Deshattobodhok (Patriotic):

“Two flowers on same stem, Hindu-Musalman/Musalman the centred eye, Hindu the soul/At night now, we chase and slaughter you, my new enemy/But with dawn, brothers will know what they did to each other/We will embrace and cry, and ask forgiveness again.’

In 1942, Nazrul contracted a mysterious neurological disease, resulting in loss of speech and memory. Some say this was caused by the grief of witnessing communal riots. He grappled with the disease for decades with the help of well-wishers, who tried to get him the best possible treatment. He lost Pramila in 1962 and his youngest son in 1971. After the Bangladesh Liberation War, India sent Nazrul to Bangladesh as a goodwill gesture but he never made it back.

On May 24, 1972, the newly independent nation of Bangladesh brought Nazrul to live in Dhaka with the consent of the Government of India. In January 1976, he was granted citizenship of Bangladesh. But personal and national tragedies had already taken a heavy toll on him and Nazrul soon succumbed to his long-standing ailment, on August 29, 1976.

Since his passing away, many centres of learning and culture have been founded and dedicated to his memory in Bangladesh. In India, the Government of West Bengal established the Nazrul Tirtha in 2014 at Rajarhat, which houses archives, a research centre and an auditorium, and is a hub of cultural exchange between India and Bangladesh. 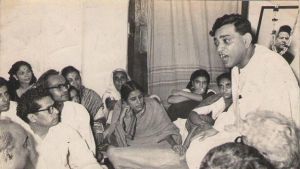 It is so apt that even after his death, Nazrul continues to inspire us towards oneness. As he says in his poem Manush: “Caste, creed, religion – there’s no difference./Throughout all ages, all places,/we’re all a manifestation/of our common humanity.”

Bengal Freedom Struggle independence Bangladesh partition Poetry Tagore
You May Also Like
History Daily
Moamoria Rebellion: The Revolution that History Forgot
By Mahasweta Dey
A 30 year civil war, a kind of ‘people’s revolution’, that hollowed out the Ahom kingdom from within
Amazing India
Finding the Indus Valley Civilization
By Anshika Jain
Catch the riveting story of the most significant archaeological finds of the 20th century
History Daily
Anjediva Island: Goa’s Unknown Treasure
By Yash Mishra
Discover the tiny island of Anjediva in Goa that has remained important for the last 2,000 years.
Living History
Emperor Jahangir: The Naturalist
By Anshika Jain
Read all about the wild obsession of a quirky Emperor, with his pets and other animals
Support
Support
Each day, Live History India brings you stories and films that not only chronicle India’s history and heritage for you, but also help create a digital archive of the 'Stories that make India' for future generations.