Most people know of Cooch Behar in North Bengal, thanks to the late Maharani Gayatri Devi of Jaipur, once considered the most beautiful woman in the world. But here’s another reason to take note of this former princely state. Also known as Koch Behar, it was the seat of one of the greatest generals of medieval India, Sukladhvaj.

Popularly known as ‘Chila Rai’ or the ‘Kite King’ for his dexterity and swiftness on the battlefield, (‘Chila’ means ‘kite’ in the Koch language), Sukladhvaj took on the all-powerful Ahoms and helped carve an empire for his elder brother, the king.

The Koch dynasty, which ruled the Kamata kingdom, was founded in 1515 CE by Biswa Singha and covered parts of today’s North Bengal and Western Assam.

According to the book, History of the Koch Kingdom: 1515-1615 (1989) by Assamese historian D Nath, Biswa Singha, the founder of the dynasty, is said to have had 18 sons, one of whom was Sukladhvaj.

Malla Deb ascended the throne and assumed the title of ‘Nara Narayan’. He appointed Sukladhvaj as ‘Yuvaraj’ or heir apparent, giving him a new name, ‘Sangram Singha’, adds D Nath in his book. Sukladhvaj, also an exceptional warrior, was appointed Commander-in-Chief of the army. And over the next three decades, he expanded the Koch empire, from Manipur to Meghalaya, time and again overpowering the powerful Ahoms (1228-1828), the most dominant power in the region at the time.

In his book, Glimpses Into The History of Assam (1977), historian Dr P N Dutta mentions how the Ahoms were not only defeated decisively in a battle against the Kochs in 1546 CE, but that Sukladhvaj in a defiant assertion of his might even built a fortress at Naraynpur (present-day town of Lakhimpur in Assam), right in the heart of the Ahom kingdom. This was soon avenged, when just over a year later, in 1547, the Ahoms under King Suklenmung (r. 1539-1552) launched a battle against the Kochs and defeated them.

Skirmishes between the Kochs and the Ahoms were frequent, with victory alternating on both sides, and it was during this time that Sukladhvaj acquired a moniker that would stick throughout history – that of ‘Chila Rai’ or ‘Kite King’ for how swiftly (like a kite) he moved his troops in war, a huge advantage on the battlefield.

In 1562 CE, Chila Rai invaded the Ahom kingdom again, this time both by land and after crossing the Brahmaputra river.

His army was victorious and he stormed Garhgaon, the Ahom capital, in triumph in 1563 CE. The defeated Ahom king Sukhaampaa (1552-1603) had by then taken refuge in Charaikh in Namrup (near present-day Dibrugarh, Assam). After a few months, the Ahom king for peace. As a formal acknowledgment of Koch supremacy, many of the sons of Ahom’s chief nobles were dispatched to the Koch kingdom as hostages and the Ahoms paid a hefty war indemnity to the Kochs.

After this decisive victory over the Ahoms, Chila Rai advanced with his army towards the Kachari kingdom (comprising areas of present-day Dima Hasao and Golaghat districts of Assam and Dimapur of Nagaland), also known as Hedamba. Here, too, he was victorious and managed to get a fair sum as a tribute for the Kochs.

Notching up one victory after another, Chila Rai continued to sweep forward, usurping more and more territories in his wake. This constant expansion of his brother’s kingdom took him to Manipur, to the Jaintia kingdom (in present-day Meghalaya), and kingdoms within Assam and Tripura, where Chila Rai himself killed the king Bar Gosain in a fierce battle in 1564 CE.

Each victory brought more power and rich tributes to the Kamata kingdom. In the process, Chila Rai became a legend, so much so that in some cases, like that of the Raja of Khairam, in the Khasi-Jaintia hills (Meghalaya), local rulers voluntarily surrendered to the Koch general rather than risk their lives. The Raja of Khairam’s annual tribute was fixed at 15,000 rupees, 900 gold coins, 50 horses and 30 elephants. What’s more, he agreed to mint coins in the name of the Koch king ‘Nara Narayan’.

According to D. Nath, Chila Rai and Nara Narayan next set their sights on the principality of Sirat (Sylhet in present-day Bangladesh), not far from the kingdom of the Jaintias. The battle between the two forces lasted three days. While the army of the ruler of Sylhet suffered extensive losses, the king of Sylhet, whose name is not known, himself lost his life. The ruler’s brother Asirai made peace with Chila Rai and accompanied the latter to the court of Nara Narayan with a huge tribute. He was installed on the throne of Sylhet on condition that he pay an annual tribute.

Chila Rai’s ambitions were boundless and, by 1567, he had invaded the kingdom of Gaur (in present-day Bengal) chiefly to avenge the misdeeds of one of its generals, Kalapahar, who had invaded Assam in 1553 and destroyed many Hindu temples. The battle that followed continued for ten days. Chila Rai fought valiantly but was ultimately defeated and taken prisoner. After a few years of captivity, Chila Rai was set free by the Sultan of Gaur, Suleiman Karrani, who wanted a strong northern ally against the advances of the Mughals.

But that was not to be. In 1574, the Koch king joined forces with Mughal emperor Akbar, to attack the Sultan of Gaur. Sandwiched between Chila Rai in the east and the Mughal army under Raja Man Singh in the west, the ruler of Gaur was easily defeated in 1576. The kingdom of Gaur was then divided between the Koch king Nara Narayan and Mughal emperor Akbar, an event mentioned in the Akbarnama, the official chronicle of the emperor’s reign. 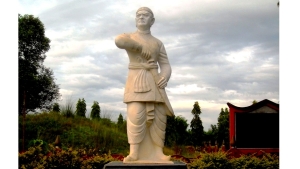 Chila Rai’s winning streak ended with his own death, not on the battlefield but while on another campaign in Gaur, where he contracted smallpox and died on the banks of the Ganges in 1571 CE.

For the nearly three decades that he dominated the region, Chila Rai built a reputation that was unrivalled by any other.

But his influence went beyond the battlefield. It was under the patronage of Chila Rai and Nara Narayan that Srimanta Sankardev, the renowned Vaishnava saint of Assam, was given protection from the Ahoms and was able to preach his Ek Sharan Naam Dharma philosophy (‘Lord Vishnu is the root of all Gods’) here. Most of his literary works were completed under the patronage of Chila Rai, who was himself a noted scholar and whose analytical annotation on poet Jaydev’s Geet Govinda reveals his command over Sanskrit.

Nara Narayan and Chila Rai also had the famous Kamakhya temple on the Nilachal hill in Guwahati rebuilt. The temple had been destroyed by the Sultan of Gaur’s general, Kalapahar. Statues of Chila Rai and his brother still grace the entrance of the temple.

Chila Rai was a remarkable general who helped his brother, King Nara Narayan build a formidable empire. While the Koch kings continued to lord over Cooch Behar till the kingdom was merged with the Indian Union in 1947, the height of Koch glory was achieved during Chila Rai’s time.

No wonder that even today, the mighty Koch general’s birth anniversary is celebrated with great aplomb. Even the Assam government’s highest bravery award is named after him – Bir Chilarai.