Anasuya Sarabhai is a name few remember, yet the ‘Motaben’ from Ahmedabad, as she was fondly called, was a pioneer of the labour movement in the country. This is the story of a remarkable woman, who was born into the illustrious business family of the Sarabhais and who took on even her own family in her quest for justice.

Born in 1885 with the proverbial silver spoon in her mouth, Anasuya was a daughter of the Sarabhais. The Sarabhais trace their story to, Karamchand Premchand, who had started a flourishing trading business between India and China in the early 19th century. This later developed into a prosperous industrial empire that extended from textiles, soaps, oil, sugar to pharmaceuticals and included the Calico Textile Mills and Ambalal Sarabhai Enterprises.

The eldest of three siblings, Anasuya had a sister and a brother named Ambalal, who would go on to lead the Sarabhai group and expand it. The siblings were orphaned when Anasuya was around 9 or 10 years old and they went to live with their uncle, Chimanlal.

Anasuya was married at the age of 13 but she separated from her husband very early and later divorced him. This was a rare occurrence in India in those days, and while she may have been born into privilege, her early life was full of trials and tragedies. One constant support during these difficult times was her brother Ambalal.

It seems Anasuya was destined to make history and she asserted her will early on. Denied a higher education while being looked after by her uncle, she decided to get one in England, where she travelled to in 1912. Supported by her brother, she decided to study medicine. However this called for dissection, which was against the Jain principles she was raised with, so she decided to shift to the London School of Economics.

Here, Anasuya was influenced by the Fabian Society and studied under George Bernard Shaw, noted English playwright, and Beatrice Webb, a social reformer and economist who was also a founder of the London School of Economics. Webb had a particularly significant influence on Anasuya as she had studied and written extensively on the industrial workers of England.

The Fabian Society was established by leading intellectuals in England towards the end of the 19th century in London. The society was a socialist organisation founded with the goal of establishing a democratic, socialist state in England. The socialists believed in equitable distribution of resources and collective ownership of resources. The same principles later guided independent India’s government in the 1950s and was considered quite radical at the time. Besides Anasuya Sarabhai, independent India’s first Prime Minister Jawaharlal Nehru was also influenced by the Fabians.

Memorial of the Fabian Society|Wikimedia Commons

This was a whole new way of thinking and of life for Anasuya, who had been raised in the somewhat cloistered, upper class yet conservative, elite society of Ahmedabad. While in London, she walked about the streets unaccompanied, learnt ballroom dancing and even participated in the Suffragette Movement! The Suffragette Movement established in the late 19th century worked in getting women in the United Kingdom voting rights and succeeded in getting complete parity with men in the year 1928.

She revelled in the freedom she enjoyed here, which contrasted sharply with her experiences in India.

Anasuya returned to Ahmedabad in 1914, her life irrevocably changed and she decided to pursue a life dedicated to public welfare. Before involving herself in the labour movement, she had already started working on improving the lives of the people who worked in the mills owned by her family. She had opened a school and even a crèche for the children of the mill workers.

It was during this time that she experienced a turning point in her life and work. She describes it thus:  "One morning, I was sitting outside in the compound combing the children’s hair when I saw a group of 15 workers passing by as if in a trance. I had already got to know some of them, so I was no longer afraid of them. I called them, even though I did not know them well, and asked them, ‘What’s the matter? Why do you look so listless?’ They said, ‘Behen, we have just finished 36 hours of work… We have worked for two nights and a day without a break, and now we are on our way home.’ These words filled me with horror. This was no different than the kind of slavery women faced!"

This was enough for Anasuya to up the ante in her journey to bring about change.

So she studied the prevailing labour practices and was devastated by what she found. The workers worked long hours in unhygienic conditions in the city’s mills, some of which were in fact owned by her family.

The year 1914 also saw the plague create havoc in the lives of the workers. By now at their wits’ end, they were demanding better working conditions and increased wages from the mill owners. At this point, Anasuya came forward and offered her support. This backing, coming from a person belonging to the class they were protesting against, gave the workers hope.

While one may assume that Anasuya’s privilege and social standing might have disconnected her from the people, it actually helped as it was a bridge between the two classes. She was ideally placed to communicate the anguish of the working class and hope for a fair hearing. Her involvement immediately drew the attention of the public as well as those who controlled their lives – the mill owners.

One of the most significant events that cemented Anasuya’s role in the workers’ movement was the Ahmedabad Textile Mill Workers’ strike in 1918.

In 1917, the plague had spread to Ahmedabad, and this had created a dire situation for the mill workers.

Many left the city for their villages and to prevent more from fleeing, the mills offered a temporary ‘plague allowance’, which ranged from 20 percent to 70 percent of the workers’ wages.

The plague itself had subsided by January 1918 but it had doubled the cost of many commodities while creating a scarcity of essentials like salt and kerosene. This made life untenable for the working classes, who could barely afford these basic necessities.

The mill workers wanted a permanent raise in wages and an improvement in working conditions, in which Anasuya led them. While the workers demanded a 50-per cent pay rise, the mill owners were willing to offer only 20 percent. Gandhi's intervention brought the workers’ demand down to 35 percent but the mill owners wouldn’t budge. The impasse led to a mill lockout on the 22nd of February 1918.

The protests and deadlock went on for a few weeks and Gandhi decided to go on an indefinite fast in solidarity with the mill workers on 15th March. Anasuya and many of the workers joined him but Gandhi convinced them not to and fasted alone. This caused great worry among the people around him as well as among the mill owners. They finally agreed to the 35-per cent pay rise after arbitration and Gandhi broke his fast on 18th March 1918.

Interestingly, the protest had pitted Anasuya and Gandhi against Ambalal Sarabhai, Anasuya’s brother, who had supported both Gandhi and Anasuya through thick and thin. Ambalal was the head of the Ahmedabad Mill Owners’ Association and had led the negotiations for them. It is said that Ambalal was livid when he learnt that Anasuya was leading the workers but this didn’t deter her.

The satyagraha had also led to the establishment of the first union of textile workers in Ahmedabad, the Majdoor Mahajan Sangh, also known as the Textile Labour Association, which was led by Anasuya for the next few years. She came to be known fondly as ‘Motaben’ (Elder Sister), a sign of affection as well of respect, and that people looked at her to lead them in their struggles.

Anasuya and her work as a labour leader caught the imagination of the nation and, in the 1930s, when the great Hindi writer Premchand wrote his only script for a movie, it was for a film called Mill Mazdoor. It dealt with the rights of the workers and showed a brother and a sister pitted against each other with the sister firmly on the side of the workers, quite like the story of the Sarabhais.

Anasuya passed away in 1972 but her legacy lives on through the people and the movements she inspired. One of the most notable among these is SEWA – Self-Empowered Women’s Association – established by Ela Bhatt in 1972. Bhatt, in fact, had worked with Anasuya in 1955.

The Majdoor Mahajan Sangh set up by Anasuya Sarabhai played a vital role in establishing and maintaining harmonious relations between textile mill owners and workers. It also helped reduce violence and preserve communal harmony during the 1969 riots in Ahmedabad. It helped workers get fair wages and better working conditions for decades. However, in the last three decades during which time most of the mills in Ahmedabad shut, the union’s role has also been curtailed considerably.

In the year 2017, Google celebrated this pioneer with a Google Doodle, the iconic illustration on the Google home page.

Anasuya is an inspiration for everyone, even in present times. She could have easily chosen a life of luxury and comfort but, instead, worked hard to improve the lives of everyone whose paths she crossed, even in the face of great challenges. 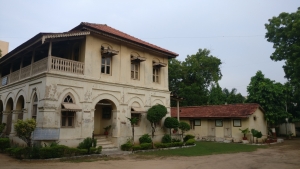 women Ahmedabad Sarabhai mills labourer union leader
You May Also Like
LHI HerStory
Umabai Kundapur - An Unsung Hero
By Aditi Shah
Umabai Kundapur set up one of the largest voluntary organizations during India’s freedom struggle.
LHI HerStory
Saraswathi Rajamani: India’s Teenage Spy
By Yash Mishra
The Indian freedom movement bred tales of incredible bravery but few are as incredible as that of Rajamani.
LHI HerStory
Hansa Mehta: India’s First Woman Vice-Chancellor
By Aditi Shah
She was a freedom fighter, a social activist, a women’s rights advocate, a writer, a parliamentarian and an educator
LHI HerStory
Anna Chandy: India’s First Woman Judge
By Aditi Shah
Anna Chandy was the first Indian woman to become a judge not only in India but the entire British Commonwealth.
Support
Support
Each day, Live History India brings you stories and films that not only chronicle India’s history and heritage for you, but also help create a digital archive of the 'Stories that make India' for future generations.