‘Martanda’ and ‘Molly’ were not names you were likely to find on a wedding invitation in the early 20th century. So it was no surprise that the fairytale wedding of this Indian king and his Australian bride shook the British establishment – and even outraged King George V!

Molly Fink was one of two Australian royal wives in British India, the other being Joan Falkiner, whose equally fascinating story, a generation later, made waves on three continents. They were not the first Caucasian women to marry into Indian royalty but they broke the unwritten code that the British had for the marriage alliances of Indian princes and kings.

Coralie Younger, an Australian historian and author of Wicked Women of the Raj, has extensively researched the Western women who consorted with Indians. Many of these women were shop girls, bar girls, waitresses and chorus girls, who were dismissed as gold-diggers. Often relegated as ‘subsidiary queens’ or even concubines, they were denied official recognition by the British, who kept a watchful eye on who was marrying whom in these royal houses and controlled their marriages by suggestion or official recognition.

The British were strictly against European or Caucasian women consorting with or marrying Indians.

If a king wanted to take a white woman as his primary Maharani or marry a white woman without previously having married an Indian woman, it would force the British to acknowledge the mixed marriage and children born of it, which would further suggest that the British and Indians might, in fact, be equal!

Indian Princes at the Delhi Durbar of 1903|Wikimedia Commons

But Molly Fink and Joan Falkiner cared little for these ‘rules’. They were elegant, refined and hailed from cultured and well-to-do families. They lived life on their own terms. But who exactly were these women and how did they make the leap from Australian society to Indian royalty?

‘Molly Fink’, or Esme Mary Sorrel Fink, was born on 15th September 1894 in Melbourne, Australia. She came from a relatively prosperous background but her family had fallen on hard days. Her father Wolfe was a barrister and a Shakespearean scholar, and after he died, her mother Elizabeth rented an apartment in the elegant Hotel Majestic Mansions, hoping to find suitors for her daughter.

Clearly, Lady Luck was on her side, for even as Elizabeth Fink shopped for a son-in-law of good breeding, Martanda Bhairava Tondaiman, the king of Pudukkotai (in present-day Tamil Nadu), arrived on a visit to Australia. As luck would have it, the dashing Martanda was a bachelor even though he was pushing 40, which was unusual for an Indian royal at the time.

Pudukkotai was a relatively small state but a strong ally of the British East India Company. Martanda, an Anglophile who had enjoyed a private English education, had refused to marry a woman from his own community as he found them backward. He had been previously been engaged to an American woman but that alliance was dissolved partly due to pressure from British officials.

In 1915, Martanda met Molly at a dinner at the hotel where she and her mother were staying, and within five months, he had proposed to Molly.

Their subsequent nuptials caused a great stir in Australian society and Molly’s family was shocked that she had married a dark-skinned man. It was scandalous!

The British, on the other hand, were equally aghast that an Indian Raja had married a Caucasian woman. Angma Dey Jhala, Professor of History at Bentley University in the United States writes that the British government was stunned at the wedding and matters even reached the Crown. Jhala says that King George V expressed his outrage in a letter to Lord Hardinge, saying, “Molly Fink. What a name!”

After their fairytale wedding, Martanda and Molly returned to Puddukotai and their arrival was marked by a grand celebration, with processions and entertainment by nautch girls and bejewelled elephants. But things soon took a turn and the couple had to leave the country five months later.

The British wouldn’t recognise Molly and told Martand that official invitations would not include her. Also, Molly, who had become pregnant, fell severely ill. It was suspected that she had been poisoned by oleander leaves by someone at the court. Martanda and Molly decided to move. Since travelling to Europe was tricky due to World War I, they migrated to Australia, where their son Martanda Sydney Tondaiman was born.

Martanda Bhairava finally decided to give up the crown in 1919, when the Secretary of State for India refused to recognise Sydney as his heir. He nominated his brother Rajagopala Tondiaman to the throne and retired from public life with a pension. The British did reconsider recognising Martanda Sydney as the official heir in 1927 but decided against it, afraid of the precedent it would set.

After spending the early years of their exile in Australia and a short interlude in London, the couple moved to Cannes in France in 1920, where they lived a glamourous life. Here, they were a part of the creme de la creme of society and their friends included Cecil Beaton, the royal photographer and Oscar winner, the Duke and Duchess of Kent, and British writer William Locke.

Martanda died in Paris in 1928 and Molly wanted his body taken to India to be cremated there with state honours but her request was denied. Martanda was cremated in London at the Golden Green Crematorium with Hindu rites.

Tombstone commemorating the Tondiamans at the Golden Green Crematorium|Wikimedia Commons

Molly continued to live in Cannes and then England, with her son Sydney, who often got into trouble with the law and became a naturalised citizen of the United States. Molly passed away in 1967 in her beloved Cannes.

Molly’s story, it appears, was repeated with her compatriot Joan Falkiner (born 1915 or 1917). Even though she was a generation younger than Molly, Joan’s life bore remarkable similarities to the older woman’s. Born in a well-travelled and prosperous family, Joan was visiting Germany in 1937, when her life changed forever.

She met Nawab Taley Khan, the ruler of Palanpur, a relatively low-profile princely state (now in the modern state of Gujarat), who was also on vacation in Germany. Taley Khan, who was around 45 years old at the time, fell head over heels for Joan and started courting her. Despite Joan’s family’s disapproval, the couple corresponded with each other and continued their relationship.

Joan sailed for India in 1939, against her family’s wishes, and on reaching Bombay, Taley Khan had her put up at the Taj Mahal Palace Hotel.

Joan is believed to have converted to Islam and taken the name Begum Jahanara on marrying Taley Khan in order to lend legitimacy to their marriage.

Taley Khan had previously been married to a woman from his own community and had children by her. These included his heir, Iqbal, who was 20 years old when Joan married Taley Khan. Taley’s first wife was reportedly an invalid when he married Joan. Since his succession was secured, Joan and Taley Khan were spared the kind of hostility from the British that Martanda and Molly had faced.

Joan had one child, Princess Shameem, who was born in 1943. In the early years of their marriage, Joan and Taley Khan divided their time between the kingdom of Palanpur and their summer homes in Bombay and Mount Abu, along with visits to France, England and Australia.

Joan finally got her due on the eve of India’s independence. Lord Mountbatten was a friend of Taley Khan, and one of his last acts as Viceroy of India, on 14th August 1947, was to recognise Joan as the legal wife of Taley Khan. He granted the title of 'Her Highness' to Joan Falkiner. With a single stroke of the pen, Joan finally received recognition due to her. But it was too little too late.

After India’s independence and Palanpur’s merger with the Union of India, they became global citizens, living in Cairo and Cannes before returning to India due to Taley Khan’s ill health. They moved to his summer home in Mount Abu, where Taley Khan passed away due to cancer in 1957.

After Taley Khan’s death, there wasn’t much to keep Joan in India. She also had some issues with Taley’s son and successor over her allowance. Joan moved, first to France and later to her native Australia, where she is believed to have passed away in 2003.

Taley Khan and Joan’s daughter Shameem was educated at prestigious boarding schools in England and had been written about as a serious and modest young woman in her early youth.

Shameem, however, a little like Sydney, seemed to have trouble finding her place in the world and lived incognito, with even her family finding it difficult to locate her.

The relationships between Indian princes and their European wives are full of tales of decadence and avarice, but the stories of Molly and Joan are of quiet dignity and enduring love, which braved the odds. These were global citizens before the term was even coined but, sadly, their lives were marked by tragedy. 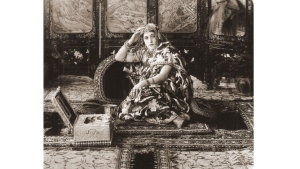 palanpur Australia Cannes
You May Also Like
LHI HerStory
Hansa Mehta: India’s First Woman Vice-Chancellor
By Aditi Shah
She was a freedom fighter, a social activist, a women’s rights advocate, a writer, a parliamentarian and an educator
LHI HerStory
Homai Vyarawalla’s Tryst With Destiny
By LHI Team
We explore the life and work of India’s first woman photojournalist
LHI HerStory
An Untold Tale of a Queen Mother
By Madhuri Katti
Malika Kishwar, the Queen Mother of Awadh, travelled to London to meet Queen Victoria and plead for her son.
LHI HerStory
Umabai Kundapur - An Unsung Hero
By Aditi Shah
Umabai Kundapur set up one of the largest voluntary organizations during India’s freedom struggle.
Support
Support
Each day, Live History India brings you stories and films that not only chronicle India’s history and heritage for you, but also help create a digital archive of the 'Stories that make India' for future generations.