Mah Laqa Bai: From a Poet to a Political Advisor

In the year 1802, during the celebration of the Persian New Year in the court of Mir Nizam Ali Khan of Hyderabad, an event was held to honour soldiers and courtiers with gifts, titles and grants. Amidst the multiple men who received these was a 34-year-old woman, standing elegantly with dark, plaited hair reaching her knees. She was at that point, arguably, the most influential woman in the Deccan - playing multidimensional roles - that of a poet, a courtesan, a warrior, a political advisor, a patron of arts and an educationist.

In the event, the Nizam bestowed upon her the formal court title ‘Mah Laqa Bai’ or ‘Madam Moon-faced’ and granted her jagirdari over large areas of land with the right to collect revenues, making her independently wealthy. Additionally, she was given a bodyguard of 100 soldiers and the right to be carried around in a palanquin and have her way cleared by the beating of drums. She was the only woman to be given the rank of Senior Omrah (reserved for the highest nobility) by the Nizam.

Who was this powerhouse and what is her legacy?

Mah Laqa Bai was born Chanda Bibi on 4th April 1768 to a courtesan called Raj Kunwar Bai and her husband, a Hyderabadi nobleman. Interestingly, her maternal grandfather was a Mughal administrator in Ahmedabad during the reign of Emperor Mohammad Shah. When he fell on bad times, he abandoned his wife and three daughters. Left to fend for themselves, the women joined a roving band of performers who plied their trade between Rajasthan and the northern Deccan. They learned to sing and dance along with the art of mimicry.

Once, while in Burhanpur, the group encountered the army of Nizam-ul Mulk (1671 - 1748), the first Nizam of Hyderabad and founder of the Asaf Jah dynasty. The women became camp followers in the role of entertainers, and Raj Kunwar Bai, especially, gained popularity for her beauty and talent. When the army reached Aurangabad, the then capital of the Nizam, the women rose to become star courtesans.

By then, Raj Kunwar Bai had given birth to two daughters, and later, around the age of 50, she married a nobleman and had her third daughter, Chanda Bibi (Mah Laqa Bai). The girl grew up in the house of her eldest half-sister, Mahtab Kunwar Bai, who was a consort of Nawab Rukn-ud-Daula, Prime Minister to the second Nizam of Hyderabad, Nizam Ali Khan.

Mah Laqa Bai, thus, grew up in an aristocratic household with all kinds of resources at her disposal. She had the best teachers and was exposed to the vibrant culture of Hyderabad, Nizam’s new capital.

She was trained not only in literature and classical dance but also in archery and horse-riding.

As soon as she started performing publicly, Mah Laqa’s dignified presence caught the eye of many men and, in her lifetime, she was an intimate companion to two Nizams and three Prime Ministers of Hyderabad, among many others.

However, the most important man in her life was the master musician and great-grandson of Tansen, Khushhal Khan ‘Anup’, who trained her in music. From Braj lyrics to Mughal music theory to composing songs in North India ragas, he taught her everything about music. It was from him that Mah Laqa learned the art of composing ghazals and couplets, and she later became renowned for this talent. Her work was a mixture of romanticism and mysticism. Here’s a couplet she wrote:

Who has the power to praise God, should a tongue try to speak

To tell Muhammad’s virtue, who needs a poet’s glittering gathering?

Keep the tongue from babbling, like a candle’s glowing wick.

Mah Laqa lived in a period when Dakhini (a version of Urdu) was transitioning into Persianised Urdu, and her literary work provides an insight into such linguistic transformations in Southern India. Her poetry had themes of love, faithfulness as well as that of intrigue and enmity. Sometimes, she would accompany her recitals with Deccani-style Kathak.

Mah Laqa was, arguably, the first woman in history to publish a diwan (a collection of poems). Titled Gulzar-e-Mahlaqa, the book was authored and calligraphed by her in 1798 and contains 39 ghazals, each more beautiful than the other.

Back to the men in her life, Scott Kugle, author of When Sun Meets Moon: Gender, Eros And Ecstasy In Urdu Poetry, notes that Arastu Jah, Prime Minister to the second Nizam, deliberately groomed Mah Laqa from a very young age, to get her close to the Nizam as a part of a political strategy.

Arastu Jah played a key role in the truce between the Nizam and the Marathas, and was instrumental in the restoration of the territories that the Nizam had lost to the Marathas in the Battle of Kharda (1795). With his help, Mah Laqa, in the mid-1780s when she was about 15, had earned the affection of the second Nizam and remained his confidante. He even consulted her on matters of state policy until he died. Besides being a star performer in his court, Mah Laqa also accompanied the Nizam on hunting expeditions. But what is even more fascinating is that she participated in the three wars fought by the Nizam, dressed up in male attire and showing exceptional javelin skills!

This was a time when the Maratha Empire was growing and there were regular skirmishes between the Marathas and the Nizam’s army. Once, on a diplomatic mission to the rival court in Pune, Mah Laqa Bai amazed the Maratha Chief Minister, Nana Phadnavis, with her knowledge of Arabian horses.

Many of the poems written by Mah Laqa reflect her gratitude (or flattery) for the Nizam.

When the second Nizam and his Prime Minister Arastu Jah died in 1803 and 1804, respectively, Mah Laqa Bai skilfully gained the patronage of the new Nizam, Sikandar Jah, and that of his Prime Minister, Mir Alam. In fact, Mir Alam was already an admirer of Mah Laqa and it was at one of his parties, in 1799, that Mah Laqa met Sir John Malcolm, the assistant British Resident in Hyderabad, and slipped him a personal copy of her diwan as a gift. Today, it is with the British Library’s India Office Collection.

In an interesting anecdote, it is said that Mah Laqa Bai had a crackling sense of humour and oodles of charm. Once, while she was travelling, a small container of lime fell from her carriage. Someone who had noticed this remarked that an ‘egg’ had fallen from Bai’s carriage. Mah Laqa quipped, instantly, ‘How nice, the chick started chirping as soon as it fell.’

While we are not sure of the extent of her relationships with prominent men in Hyderabad, there is one person she was in love with, Raja Rao Rambha Jayawant Bahadur, a Maratha military chief under the second Nizam. He fought against the Maratha Empire and also joined forces with the British and the Nizam in their war against Tipu Sultan in the 1790s. He was also one of her earliest patrons and they shared a love for horses, with Mah Laqa often gifting him some.

As the rays of your beauty cause sweat drops to drip
Shamed, the moist sun hides behind a hem of clouds
Chanda has no fear of dark omens, for her protector
Is ‘Ali who brightens the sun in this world and the next

Mah Laqa Bai, who influenced some of the major political decisions in the court of Hyderabad, also lived a very devotional life. The last couplet of almost every ghazal she wrote was addressed to Ali, her divine benefactor and the first emir of the Shia faith. She was a major donor to the hilltop shrine of Maula Ali, son-in-law of Prophet Muhammad, in Hyderabad.

Her contribution to society went beyond her literary achievements. She built step wells, mosques and gardens; commissioned a library filled with books on the arts and sciences; and sponsored poems and texts, including the creation of the Mahanama, a history of the Deccan.

Mah Laqa Bai’s mansion, the Hassa Rang Mahal, where she trained hundreds of courtesans, still stands at Nampalli. At the end of the last Nizam’s rule in Hyderabad, it was converted into a government school. It is believed that she bequeathed her properties, which included land, gold, silver and diamond-studded jewellery, to homeless women.

Mah Laqa died in 1824 CE and her tomb is at the foot of the hill of Maula Ali. History will remember her as a woman who challenged a socio-religious society, where women were not even allowed to step out their purdah. 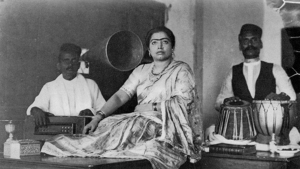 royal Poet Maratha nizam hyderabad Deccan Poetry singing dancing
You May Also Like
LHI HerStory
Sucheta Kriplani and the Fight for Freedom
By Aditi Shah
From an introverted youngster to a central player in India’s freedom movement
LHI HerStory
‘Angareywali’ Rashid Jahan: Urdu’s Angry Young Woman
By Abid Khan
Rashid Jahan ‘declared war’ on conservative Muslim society through an explosive anthology
LHI HerStory
Bharat Mata - From Art To Reality
By LHI Team
A four-armed goddess wearing saffron-colored robes, holding a book, sheaves of rice, a mala, and a white cloth.
LHI HerStory
An Untold Tale of a Queen Mother
By Madhuri Katti
Malika Kishwar, the Queen Mother of Awadh, travelled to London to meet Queen Victoria and plead for her son.
Support
Support
Each day, Live History India brings you stories and films that not only chronicle India’s history and heritage for you, but also help create a digital archive of the 'Stories that make India' for future generations.