If the name ‘Subhadra Kumari Chauhan’ doesn’t ring a bell, how about something she wrote? ‘Khoob ladi mardani, vo to Jhansiwali rani thi’ (She fought valiantly like a man, the Queen of Jhansi). Most of us learnt the poem that contains these immortal lines in school but what we weren’t taught is that the woman who penned this powerful poetic tribute was no less valiant than the Queen of Jhansi herself, and that she too dedicated her life to the cause of India’s freedom.

The poem, titled Jhansi Ki Rani, is among Subhadra’s most famous works but let us meet the woman who wrote it and who went on to become one of India’s most fearless freedom fighters.

Subhadra was born into a conservative zamindar (landlord) family, in Nihalpur village, Allahabad district, Uttar Pradesh, on August 16, 1904. She harboured a rebellious streak from an early age and although her family practiced chhooa-chhooi (a euphemism for the practice of ‘untouchability’), she insisted on helping the domestic staff with their chores and would chastise her mother for discriminating against their lower-caste neighbours.

Although her father was a patriarchal disciplinarian and the women of the house had to wear ghoonghats (head covers), he was also passionate about education and made sure that all his children were well educated.

Subhadra studied in Crossthwaite Girls’ School in Allahabad, where she was a few years senior to another great Hindi poet, Mahadevi Varma. In fact, it was Subhadra who noticed and encouraged Mahadevi’s poetic abilities – together they would write poems in between classes, thus setting the tone for a life-long friendship.

Incredibly, Subhadra’s first poem was published when she was just nine years old. So compelled was she to write that she even penned verse in the ikka (horse cart) on her way to school! She gained recognition when her work was published in Kavita Kaumudi, a collection of works by established poets. She wrote in the Khariboli dialect of Hindi, in a simple and intimate style that instantly connected with her readers.

The women of the Chauhan family|Ishan Chauhan

Subhadra passed her middle school examinations at the age of 15 and was married the same year to Lakshman Singh Chauhan, who lived in Jabalpur. Although her husband was also from a conservative family, he was actively involved in the freedom struggle, much to the family’s dismay. He was also part of the social reform movements of the time, such as the campaign to abolish the purdah or ghoonghat for women as well as the dowry system, and it was with his encouragement that Subhadra gave up her ghoonghat after marriage. The couple stuck to their principles even though they were ostracized by sections of the family.

In 1921, the Chauhans joined Mahatma Gandhi’s Non-Cooperation Movement and, in 1923, they emerged in frontline leadership roles in Jabalpur during the Jhanda Satyagraha (Flag Satyagraha), during which nationalist flags were hoisted across the country to challenge the legitimacy of British rule.

In 1923, the gritty and budding revolutionary was arrested and sent to the Nagpur jail before being released in a few months on account of her pregnancy. Fortunately, she was able to deliver her first child, Sudha, at home in Jabalpur. Throughout the 1930s, Subhadra presided over the women’s section of the state Congress Committee of Madhya Pradesh, and in 1936, she was elected to the Bihar Legislative Assembly.

Through these turbulent times, she managed to write 88 poems and 46 short stories, using the pen as a weapon against social injustices such as caste, gender and class discrimination. Her most famous collection of poems is Mukul (1930), which contains her immortal Jhansi Ki Rani. She also wrote children’s poems, several of which are just as popular today. Her home was frequented by poets and writers, and regular visitors included towering Hindi literary personalities such as poet Muktibodh and novelist Jainendra Kumar.

The year 1942 brought the Quit India Movement and, with it, Lakshman Chauhan’s arrest. Subhadra continued to be just as involved in the freedom struggle despite advice from well-wishers to withdraw as her arrest was imminent. By now, the couple had five children, the youngest of whom was a toddler with a palate defect that had severely impaired her speech. But Subhadra’s courage and strength did not flag even for an instant, and she took her baby daughter to Bombay for surgeries while juggling her political activities and fighting for her imprisoned husband.

This was perhaps one of the most defining moments of this remarkable woman’s life – she could have chosen the easy way out; instead, she bravely put her country’s freedom above her family’s welfare and courted arrest. She had prepared her children for this eventuality and her eldest child, Sudha, was left in charge of the family on the limited rations that Subhadra was able to get before going to jail.

This time, Subhadra marched to jail with her youngest and ailing child in her arms. But despite her own dire circumstances, she fought for the rights of her fellow prisoners and often gave up her own food for those facing more severe punishment than she was. Subhadra was released in a few months due to a life-threatening medical condition and had to be operated upon immediately after her release. She would describe these travails with great humour, saying that on her way to jail she would be honoured with so many garlands that she would make a pillow of them in her prison cell, where they would remind her of the flowers that had decked her bed on her wedding night.

The ward in which she was imprisoned in at the Central Jail in Jabalpur was later renamed the Subhadra Kumari Chauhan Ward for Women.

Despite her feeble health, Subhadra did not slow down. She was elected once again to the Bihar Legislative Assembly, in 1946, this time unopposed. She was much loved by the people she represented and was known for her kindness and altruism, even though this came at great personal cost. When she attended the wedding of her domestic help’s daughter, the elders in her husband’s family raised a great hue and cry as she had ‘defiled’ them all by eating with jamadars (domestic workers). As always, her husband stood by her, saying that those who had a problem with them need not visit their home!

Much of what we know about this inspiring couple comes from the memoirs of their daughter, Sudha Chauhan, Mila Tej Se Tej (As Effulgence Met Effulgence). She writes about the tremendous social pressures her mother had to face, saying that where a weaker person would have crumbled, her mother just kept going from strength to strength.

This same spirit came through in Subhadra’s unstinting support to Sudha’s marriage to Amrit Rai, son of the legendary writer, Premchand. It was one of the much talked-about inter-caste marriages of the time and many questions were raised. But Subhadra paid no heed and instead invited Amrit to spend some time with them before the marriage, so that Sudha and he could get to know each other!

Finally, in 1947, came freedom for the country but, with it, also the pain of Partition. Subhadra and her husband worked tirelessly to maintain communal harmony around them but then came the shock of Mahatma Gandhi’s assassination. The couple felt orphaned but vowed to continue working tirelessly to help build a new India.

But fate had other plans and Subhadra died in an accident on February 15, 1948, while one her way back from an educational conference, from Nagpur to Jabalpur. She was just 44. The nation had lost one of its heroes – it was a tragedy beyond words.

Subhadra with her grandson Alok|Ishan Chauhan

But an even greater tragedy would be to forget her legacy. Fortunately, her family is trying to ensure that this doesn’t happen. Her great-grandson, Ishan Chauhan, is working on a translation of a selection of Subhadra’s short stories into English. Furthermore, writer and translator, Prof Alok Rai, son of Sudha and Amrit, is translating his mother’s fascinating memoirs into English. 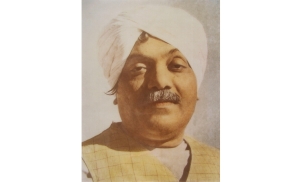 But what about the rest of Subhadra’s fellow Indians for whom she so valiantly fought? Wouldn’t it be lovely if every child who is taught her most famous poem was also told the story of this 20th century Jhansi Ki Rani?

Poet Freedom Struggle Mahatma Gandhi freedom fighter Independence Movement Satyagrahi Jhansi ki Rani Rani Laxmibai
You May Also Like
LHI HerStory
Rani Gaidinliu: Daughter of the Hills
By Aditi Shah
Rani Gaidinliu, a Naga spiritual and political leader from Manipur, led a revolt against British rule in India
LHI HerStory
The Voice of Bahinabai: A Poetic Legacy From Khandesh
By Vishwajeet Deshmukh
The poetry of Bahinabai is in classrooms, on the radio and has made it to the West.
LHI HerStory
Congress Radio: A Voice of Defiance
By Aditi Shah
The story of Usha Mehta and her underground radio station, which kept the British on their toes in 1942
LHI HerStory
Maham Anga: The Woman who Called the Shots in Akbar’s Court
By Barun Ghosh
Catch the story of Maham Anga who had Emperor Akbar virtually under her spell.
Support
Support
Each day, Live History India brings you stories and films that not only chronicle India’s history and heritage for you, but also help create a digital archive of the 'Stories that make India' for future generations.