What is the most romantic gift a husband can give his wife? Correction. What is so precious that it is fit for a prince to gift his beloved? Think ‘Mughal era’ and the obvious answer is – an album of miniature paintings.

And, mind you, this was no ordinary prince. Dara Shikoh was the eldest son of Mughal emperor Shah Jahan and one of the most tragic characters in Indian history. A great scholar and an aesthete, a beloved son, a doting father and a loving husband, Dara Shikoh met his tragic end in 1659 when he lost the war of succession to his brother Aurangzeb. One of the most interesting possessions of this doomed prince that survives to this day is the ‘Dara Shikoh Album’ of miniatures, now in the possession of the British Library, London.

The Dara Shikoh album is unique as it is one of the most complete miniature albums of its kind.

During the lifetime of his mother Mumtaz Mahal (who was buried in the Taj Mahal after its completion), Dara Shikoh was betrothed to his half-cousin Princess Nadira Banu Begum, daughter of his paternal uncle Sultan Parvez Mirza. And thus began a very interesting art project – an album of exquisite paintings made for Dara by the renowned artists of Shah Jahan’s Mughal court.

The contents of the album were prepared between 1633 CE and 1647 CE. The paintings are arranged in facing pairs, as was the tradition in Mughal albums. The contents mostly consist of portraits of teenage princes and princesses, holy men and studies of flowers and birds, indicating the breadth of Dara’s intellectual pursuits.

The ‘Dara Shikoh Album’ also has an inscription in Dara’s own handwriting, pointing to just how much he loved his wife Nadira Banu. It reads –

(‘This precious volume was given to his dearest intimate friend Nadira Banu Begum by Muhammad Dara Shikoh, son of Shah Jahan, emperor and victor, year 1056/1646–47’). It was a special gift from a loving husband to his dearest wife.

Let’s look at some of the paintings from the album, which gives us an insight into the life and aesthetic tastes of Dara Shikoh.

Shah Jahan’s favourite son Dara Shikoh (Persian, ‘of the Grandeur of Darius the Great’) had a lot going in his favour. He was given plum appointments and frequent promotions beginning at an early age and, most importantly, his father Shah Jahan formally confirmed him as his ‘heir-apparent’ by granting him the title ‘Shahzada-e Buland Iqbal’. Dara is seen here with his father, brothers and maternal grandfather, Asaf Khan (father of Mumtaz Mahal)

Dara was an erudite champion of mystical religious speculation and cultural interaction among people of all faiths. This would later make him a heretic in the eyes of his orthodox younger brother Aurangzeb and a suspected eccentric in the opinion of the worldly power brokers swarming the Mughal throne.

The lightly painted drawing is typical of painter Chitarman’s work for the prince.

The lady in the painting, which appears in the album opposite ‘Dara Shikoh With A Tutor’, somewhat more mature than most of the female portraits in the album, wears jewels of imperial quality and stands with one hand on a prunus tree and the other holding a narcissus. That and the white narcissus growing before her – white being associated with mourning – suggest that this could be Dara Shikoh’s mother Mumtaz Mahal (b. 1593), who died in Burhanpur in 1631 while giving birth to her 14th child.

The mismatched borders of the two facing paintings suggest that the prince rearranged the order of the folios so that his mother could cast her benevolent gaze on his studies. The handling of her head and the prunes in the background suggest that this could be the work of painter Bishndas.

Inscribed on the bowl in Persian is: ‘Amal-i Muhammad Khan musavvir sanna 1043’ (‘work of Muhammad Khan, the artist, the year 1043/1633–4’). The only signed and dated painting in the album is by the otherwise mysterious artist, Muhammad Khan, who was possibly from the Deccan and was engaged by Dara Shikoh when the Mughal emperor’s court was in Burhanpur in 1630-32. It depicts a prince pouring wine.

The most interesting aspect of the painting is the vase, which is filled with a bouquet of many different sorts of flowers and is very unlike contemporary Mughal depictions of vases of flowers in paintings. While flower vases are occasionally seen in contemporary Mughal party scenes, they are usually slender and filled with a single type of flower arranged in two dimensions. This extravagant bouquet in Muhammad Khan’s painting appears to have been influenced by European paintings of the late 16th and early 17th centuries.

Paintings of Birds and Flowers

Like his grandfather, Emperor Jahangir, Dara Shikoh too commissioned great paintings of birds and flowers, as can be seen from the album. One such painting is that of the black-crowned night heron (Nycticorax nycticorax), a medium-sized bird found in many parts of the world, including South Asia and South-East Asia. Such herons have a black crown and back, while the rest of the body is white or grey, the eyes red and legs yellow.

The album contains several studies of flowers that could pass muster as natural history paintings, albeit derived ultimately from European herbals but many more are in a more decorative vein.

Exotic Flowers With Butterflies. Mughal, 1630-33|British Library
A Marigold, An Iris, A Chrysanthemum, A Pimpernel, A Rose, And Possibly A Specimen of Jacob’s Ladder|British Library

One of the most beautiful naturalistic studies of flowers in the album is found in another page attributed to Muhammad Khan, where six different species of flowers are laid out as specimens on the page. Such an arrangement appears to be derived from earlier paintings by Mansur, foremost of Jahangir’s natural history painters.

The album also contains paintings of unknown princes and princesses.

A prince is seated on a white carpet against a blue-green bolster, wearing a fur-lined gold coat and green headdress with feather aigrettes, and holding a black aigrette in his left hand. An attendant stands on the left; flowers and water are in the foreground and background. The painting is attributed to Muhammad Khan.

A Princess With Wine Jar And Cup|British Library

A girl, facing right, stands in a landscape holding a bottle of wine and a cup; European pastoral scenes in the distance. Gouache with gold, originally oval, foreground and flowers added to form a rectangular shape.

Sadly, the beautiful love story of Dara Shikoh and Nadira Begum ended in a tragedy. Emperor Shah Jahan’s prolonged illness in 1657 CE gave Aurangzeb a chance to muscle in on the throne. In a series of battles, he defeated Dara’s generals and the army sent by his father. Victorious, Aurangzeb entered Agra and Shah Jahan was placed under house arrest and he spent the rest of his life confined within the walls of Agra Fort.

While they were trying to escape capture by Aurangzeb’s army, Nadira Banu took ill and died on 6 June 1659 at Bolan Pass, now in Pakistan. She had been devoted to her husband during all the hardships he had faced and accompanied him on all his travels. Just days later, Dara was betrayed and handed over to Aurangzeb’s army. On 30 August 1659, after being paraded through Delhi’s streets in chains, Dara was beheaded. All his wealth and artworks were seized by Aurangzeb.

The whereabouts of this album in the 18th century are not known. In 1823, it belonged to Lt Charles Forn of the 6th regiment at Vellore. It was purchased in an auction by the India Office Library, now known as the British Library, where it is on display in the rare manuscripts section. It has 72 folios with Persian calligraphy and 68 miniature paintings, with five leaves missing. The miniatures face each other in pairs.

Interestingly, in the early years of Aurangzeb’s reign, every effort was made to erase Dara’s existence, and Dara’s inscription dedicating the album to his wife wouldn’t survive either. It was obliterated by covering it with a gold foil, concealing it completely.

ALSO READ
Ustad Mansur – A Wonder Of His Age

But many years after Aurangzeb’s death, the gold foil wore away and Dara’s handwriting resurfaced. Without this inscription, we would never have known the real owner of this precious work of art and the story of this intimate gift to Nadira Banu Begum. At last, Dara, the intellectually curious and beloved husband of Nadira Banu Begum, got the recognition he deserved! 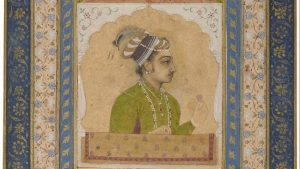 Mughal painting miniature
You May Also Like
Forgotten Treasures
Swan Car: Bizarre, Weird...or Just Quirky?
By Akshay Chavan
A car that earned it’s owner the nickname, the ‘Duck King’!
Forgotten Treasures
When They Found Buddha’s Relics!
By Aditi Shah
The story of discovering Buddha’s relics and his home for the first 29 years of his life.
Snapshort Histories
Ludo’s Indian Roots
By Aditi Shah
The board game of Ludo originated from ancient Indian game called Pachisi. Trace its fascinating journey.
Forgotten Treasures
Pashmina: Illustrious and Ancient
By Krutika Haraniya
Literally meaning ‘soft gold’ in Kashmiri, the Pashmina has a truly illustrious and ancient past
Support
Support
Each day, Live History India brings you stories and films that not only chronicle India’s history and heritage for you, but also help create a digital archive of the 'Stories that make India' for future generations.