Thousands of years ago, when people were experimenting with settled cultivation, evolving more efficient trade and transport networks, and designing natural water management systems, life was no fun and games. Or so you would think.

Well, think again. Probably realising that life is richer when tempered with leisure, people on the Indian subcontinent in ancient times appear to have set aside plenty of time to play board games. How do we know this? Archaeologists and historians are digging up a whole range of board games and other indoor games at excavation sites across India.

The earliest references to board games on the subcontinent come from the Indus Valley Civilization.

Dice and counters have been found at sites like Harappa, Lothal and Mohenjo-Daro, dated to 2500 BCE. Primitive board games have also been found etched into the floors of caves and temples, going back to the early centuries of the Common Era, in places like Bhaja, Ajanta and Ellora in Maharashtra.

Elsewhere in the world, hieroglyphics in the tomb of Merknera (3300–2700 BC) in Egypt depict ancient games, and traces of board games have even been found at archaeological sites in Mesopotamia and Greece. Clearly, board games have a long history, cutting across time and geography.

We find references to dice games between the Kauravas and Pandavas in the epic Mahabharata. The game decided the fate of kingdoms, and it is generally accepted that it was a game of Pacheesi or Chaupar.

The Buddha is said to have drawn up a list of games he wouldn’t play, and it included Ashtapada, the forerunner of chess.

References to board games have also been found the Rig Veda (written around 300 BCE), which has the Aksha Sukta, a 14-verse hymn, dedicated to a game of dice. The Skanda Purana, dated to the 7th century CE, mentions a game of dice played between Shiva and Parvati.

These games continued to be popular in medieval times. Games that involved gambling were popular in the Mughal court and Emperor Akbar is said to have been a fan of Chaupar. One can also find many popular games etched into the floors of medieval temples across Southern India, like the Veerabhadra Temple in Lepakshi.

But besides these well-known games, many other historic indoor games were played in ancient India, some of which are still flourishing while others are begging to be revived. Here are some interesting games that were showcased at a recent conference on the ancient games of India, titled ‘Playing With The Past’, organised by the Instucen Trust.

Perhaps one of the most widely played games in ancient times, this is an alignment game. It is known as Nine Men’s Morris in English, Nav Kakri in Gujarati, Daadi/Dahdi in Telugu and Jodpi Ata in Kannada. It is a two-player game, whose board has four concentric squares with lines joining them.

According to archaeologist Dr Kurush Dalal, boards for this game have been found etched in the Bhaja Caves in Maharashtra (2nd century CE), Gedera in Israel (18th century BCE), and even in Mycenae (14th century BCE) and Marathon (6th century BCE) in ancient Greece.

This is a hunting game called Adu Huli in Kannada, Vagh Bakri in Gujarati, Huli Kattu in Kannada, Baag Bok in Bengali and Bagh Chal in Nepali. The board has a triangular shape and is divided into many sections. The most interesting aspect of this game is its asymmetry.

It is a two-player game, with one playing the tiger and the other the goat. There are 3 tiger counters and 15 goat counters on the board. The goats may be numerically stronger but the tiger counters are more powerful and allow more moves. The tigers have to hunt the goats, whereas the goats have to block the tigers. The game ends when the tigers take out more than six goats or the goats lock down all the tigers.

The game has been found inscribed on the mandapa of the 16th century Veerabhadra Temple in Lepakshi in Andhra Pradesh by the team of the Mysuru-based Ramsons Kala Pratishtana art foundation.

This is an ancient racing game that three players can play. Each player starts with three to five counters and five cowri shells, which play the role of the dice. The number of steps is decided by which face of the shells faces upwards.

The board is composed of linear squares. Each player starts from their home and the goal is to reach the last square. Similar to Ludo, if a player lands on a square which has an opponent’s counter, the player can capture it. A player has to capture at least one opponent’s counter to be able to win. The first player to have all three counters reaches the last square and wins.

An inscription of this game has been found at the Mahabaleshwara Temple in Mysuru, most of which was constructed during the Vijayanagara Period.

This is a counting game, which traces its roots to Africa and is played across the world even today. Also called Aliguli Mane in Kannada, Pallanguli in Tamil, Saat Goti in Hindi, Til Guti in Maithili, it is a simple game where the board has two parts, both with seven pits each. At the beginning of the game, each of the seven pits is filled with five seeds.

The players start by taking the seeds from one pit and placing one seed in each of the other pits. When the player is out of seeds, they pick the seeds from the next pit, and this continues till the player faces an empty pit, on which the next player starts to play. The players have to capture the maximum number of seeds. The game ends when one player doesn’t have enough seeds to fill one pit with six seeds.

Traditionally popular with homemakers, this game has been attributed to their proficiency in maths!

A game in progress at the Conference|LHI

These ancient games can be classified into counting games, war games, race games, alignment games, hunt games, solitary games and morality games. Each of them has many variations in the way it is played, players, board set-up, number of counters and ways to win. The list of games that can be explored is virtually endless and this is only a sampling of our ancestors’ favourite games. 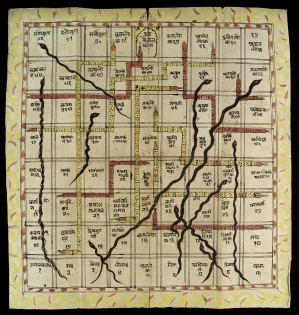 Mind you, these games didn’t just entertain, they also educated, honed mathematical skills, taught one to strategise, and even called upon the conscience. Games are about choices and chance, basically life in miniature form, and ways to learn how to play it.