Western Tamil Nadu would have been very different if it didn’t have the Kalingarayar Canal to nourish it. Velvet paddy fields and waving coconut palms kiss the canal’s banks for the better part of its 90-km run but its calm waters run deep. The story goes that the canal, over 730-year-old hydrological wonder, was built on the back of a royal snub and a vow to never give anyone a chance to cast such aspersions on the ruling dynasty again.

There may or may not be truth to the tale but the fact is that the canal, which connects three tributaries of the Cauvery River in Tamil Nadu – Bhavani, Noyyal and Amaravathi – was built by the Kalingarayar family, which played a very important role in Coimbatore’s history till as recently as the 1950s.

Over the centuries, the canal has brought great wealth and prestige to the family, which also lent its name to a strain of paddy – 'Kalingan' paddy – grown on their lands. Today, the canal irrigates 30,000 acres and benefits more than 50,000 farmers and remains a lifeline for the region.

The Kalingarayars are now based in Uttukuli, 65 km from Coimbatore, but they originally ruled from their capital Vellode in Kongunadu, when the dynasty was founded in the 13th century CE. Kongunadu was one of five divisions of Tamil Nadu, the other four being Cheranadu, Cholanadu, Pandyanadu and Thondainadu.

Most of the old records connected to the Kalingarayar family’s early history were destroyed during the wars with Tipu Sultan in the late 18th century but there are some traces of their past recorded on Cadjan leaves. Apparently, the Pundurai division of the Coimbatore region, consisting of 32 villages, was bestowed on Sathandhai Kalingan by a Chola king, and he was anointed as a local chieftain. Sathandhai Kalingan thus established the Kalingarayar dynasty, which ruled the region till the abolition of the Zamindari system after India’s independence in 1947.

The story of the Kalingarayars is enriched by the construction of the eponymous canal by the family during the reign of its founder. According to one story, Sathandhai Kalingan, the ruler of Pundurai, had approached his brother-in-law Pannai Kulathan in Karur, to ask for his daughter’s hand in marriage for his own son. The alliance was accepted and wedding plans were soon underway.

The wedding would have proceeded without a hitch – and Tamil Nadu would not have had its canal – if not for a careless remark made by the father of the bride-to-be. It appears that Kalingarayar overheard the cook asking the bride's father whether he should use fine rice or coarse rice to serve the guests at the wedding reception. The cook was told, "What does it matter whether you cook coarse or fine rice for people living in dry lands?"

Kalingarayar was deeply offended and vowed that the wedding would take place only after wetland crops grew in his lands. He returned to his capital and decided not to shave till he achieved his goal. Legend has it that Lord Subramanya appeared to him in a dream and advised him to construct an anicut, or a small dam, at Bhavani, while he dug a larger canal to irrigate the entire territory. He was also advised to choose a place where a peacock had chased a snake.

Kalingarayar realised that if Kongunadu was to be blessed with crops like rice, he would have to build a long and meandering canal. Work on the canal began in 1270 CE and it took 12 years to complete. It wasn’t easy and it came at a great cost. As the ruler of the region, Kalingarayar could have had almost anything he wanted but he was a fair man and acquired the land needed for the canal by paying over 1,000 units of gold as compensation. The land thus acquired was used to create a road between the construction site and the Urachi Hills. Another 1,000 units were paid for the boulders used in the canal’s construction.

There are many other anecdotes that embellish the story of the canal. It is said that to choose the site of the anicut, Kalingarayar went on a coracle ride with a fisherman, whom he granted special privileges at a temple festival. These privileges continue to this day. He also gave some people privileges at the Elamalai Sellandiamman temple celebrations as they had provided implements for the construction of the anicut.

When the canal was completed in 1282 CE, Kalingarayar shaved for the first time in 12 years and to honour his barber, named a village after his community, Navithan Palayam.

As a ruler, he knew he had to take everyone along. In that same spirit, Kalingarayar was quick to introduce social reforms by permitting some backward classes to paint and plaster their houses and to also wear footwear. He even allowed them to play musical instruments on special occasions.

Besides the canal, Kalingarayar constructed several check dams, tanks and water bodies in Kongunadu. After he was satisfied that his beloved Kongunadu was properly irrigated, he went to Karur to keep his promise and celebrate his son's wedding. Since then, the peacock has been the emblem of the Kalingarayar family.

The winds of change in the 14th century altered the political landscape in South India, and the territory ruled by the Kalingarayar family came under the mighty Vijayanagara Empire. From then on, the Kalingarayars became one of the 72 ‘Polygars’ or ‘Palayakkarars’ in the empire and reported to the Nayaka (Viceroy) of Madurai. Each Palayakkarar governed a palayam, which was an administrative division.

Under the Madurai Nayakas, the Kalingarayars functioned as a semi-independent principality and their power and might grew exponentially.

They had a standing army, owned palaces and forts, collected taxes, owned private estates, dispensed justice, maintained law and order, held durbars, maintained water bodies while expanding the land under cultivation, built and managed temples, and indulged in philanthropy in a big way. The paraphernalia of royalty was funded by retaining a quarter of the revenue they collected, while depositing the rest at Madurai.

Till the 15th century, the Kalingarayar family had been based in Pundurai, and it was the Vijayanagara emperor, Devaraya, who asked Kalingan’s descendant, Nanjiya Kalingarayar, to clear the forests of Uttukuli and establish his base there. On the king’s orders, he built a new capital, which included wells and channels for irrigation and even a temple to his deity – Agathuramman.

When the Vijayanagara Empire went into decline after its defeat by the Deccani Sultanates in the Battle of Talikota in 1565 CE, the Kongunadu region came under the suzerainty of the Wodeyars of Mysore. Again, luck was on their side and the Kalingarayars enjoyed the patronage of the Wodeyars in exchange for the family’s support.

They were stationed at Anaimalai (63 km from Coimbatore) and placed at the disposal of the palace. In return, the Polygars were allowed to levy tolls on goods passing through their territory en route to Kerala, a very lucrative source of income for the Uttukuli Polygars.

By the 1750s, Hyder Ali became the de facto ruler of Mysore and was succeeded in 1728 by his son Tipu Sultan. The Polygars of the Coimbatore region were harassed by Tipu Sultan and the Polygar of Uttukuli was forced to send his family to Bombay under British protection. The defeat and death of Tipu Sultan in 1799 brought Uttukuli under the British East India Company, which asked the Polygar to pay seven-tenths of the revenue he collected to the Company.

If that was a huge price to pay, there was an upside too. British rule brought peace to the region and the Polygars were able to pay attention to the affairs of their estate and improve their accounting system. This, in turn, increased revenues a great deal, which enabled the Uttukuli family to make huge donations to charitable causes in and around Coimbatore.

Among their many philanthropic initiatives, they donated the first X-ray machine to the Government Hospital on Trichy Road; they were benefactors of a veterinary hospital, the YMCA and many other institutions; and they also helped people during the outbreak of the plague in 1910.

The 33rd Polygar of Uttukuli, Agathur Muthuramaswami Kalingarayar, also played an important role in the politics of the Madras Presidency. He was the Vice-President of Madras Zamindars’ and Landowners’ Association, and a Member of the South Indian Liberal Federation. He gave money to start a school in Uttukuli and resources for the Pasteur Institute and Lawley Hospital, both in Coonoor. He was also one of the driving forces behind the establishment of the Coimbatore Spinning & Weaving Mills (1888), a first-of-its-kind in the region and one that would transform Coimbatore into South India’s textile hub.

Lastly, Uttukuli was also famous for its Dusshera celebrations, which were considered the grandest in the Coimbatore region. This can be gauged from an interesting account in The Madras Mail dated 23rd October 1912:

“The Dasra festivities at Uttukuli Zamindari commenced on the morning of 11th October 1912, with the installation of the Goddess amidst the chanting of Vedic hymns and mantras on one side of the Chandrasala, a tastefully decorated and beautifully illuminated Mandapam, the other portion being reserved for the holding of the Durbar by the Zamindar.

“The Zamindar with his family and children attended the customary worship and a Durbar was held every night. As soon as the Zamindar took his seat in the Durbar Hall, he was presented with prasadams from all temples and a number of retainers presented arms in semi-military fashion. Then all the tenants of the Zamindari paid their respects to the Zamindar.

“Afterwards, a regular programme of music and nautch was gone through. Every evening, there were Kalakshepams by Bhagavathars and others, and numerous people were daily fed. This continued for nine days and the tenth-day ceremony was an imposing one. After the worship of the Goddess in the morning, the Zamindar held a Durbar and was given a dagger and sword in commemoration of the fact that his ancestors were military chieftains ruling over that part of the country.”

The centuries-old rule of the Uttukuli Kalingarayars ended post-independence, when the Zamindari system was abolished in Madras in keeping with the Madras Big Estates Abolition Act, 1948. But the good deed by the first Kalingarayar, in transforming the dry and arid region of Kongunadu into a fertile one, lives on in the hearts of the locals even today.

A statue of Sathandhai Kalingan was recently on 13th May 2018 unveiled at Bhavani in Erode district of Tamil Nadu, while the government of Tamil Nadu has declared the fifth day of the Tamil month of Thai (January) as 'Kalingarayar Day', which the local agrarian community celebrates as 'Kalingarayan Pongal’, as a mark of gratitude.

Rajesh Govindarajulu is a noted writer and columnist who writes on the history and heritage of Western Tamil Nadu for some of India’s leading publications. He is also a former member of the Governing Council for Indian National Trust for Art and Cultural Heritage (INTACH). 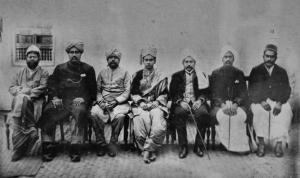 The Polygar Heroes of Tamil Nadu