Mumbai’s ‘Other’ Gateway of India

The  ‘Yashwant Siddhi Co. Op. Housing Society’ in the crowded six-foot-wide Bhendi Galli of Mumbai’s Gamdevi area is no different from any of the tens of thousands of housing societies that dot Mumbai city, except for one thing. Within its narrow compound, lies a miniature replica of the ‘Gateway of India’. It never fails to raise eyebrows, with people wondering what is it doing there. It is here that once stood the bungalow of an Indian, who actually built the Gateway of India and a number of Mumbai’s iconic ‘British’ buildings, Rao Bahadur Yeshwantrao Harishchandra Desai.

It is believed that this was the model that he actually used while building the ‘Gateway of India’.

While Mumbai is known for its beautiful  ‘British’  buildings like the CST Railway Station,  CSMVS Museum, Cowasjee Jehangir Hall, the General Post Office, the fact is that it was the British ‘designed’ them. The actual execution and construction of these grand projects were done by an army of extremely talented Indians, who sadly never have been given their due. While books on Mumbai’s history talk of great British architects like FW Stevens and George Wittet, few have heard of Yeshwantrao Desai.

Yeshwantrao Harishchandra Desai was born on 11th December 1876 at Bombay in a family belonging to the native Pathare Kshatriyas, one of the numerous communities that had settled down in the city. His father, Harishchandraji worked as an Honorary Assistant Engineer with the Public Works Department of Bombay. He passed away very soon when Yeshwantrao was just 2 years old. Yeshwantrao's mother took full responsibility for her son's education. He completed his primary education in Marathi from Jagannath Shankarseth's school. Further, he took admission at the Wilson High School, where he completed his matriculation in English.

Dr. Mackikan, the then Principal of the Wilson High School was very fond of Yeshwantrao's intelligence. Marathi writer Lakshmanrao Vinayak Paralkar, a contemporary of Yeshwantrao, talks about the latter's childhood memory. One day, it was an eclipse and the school was supposed to leave its students for a half-day. Principal Mackikan did not want to leave them early. Hence, he gathered everyone and taught them about how an eclipse happens. He explained to them about its formation and also told them that it has no connection with the planets, Rahu and Ketu. After this class, the Principal announced that there won't be any half day. All the students became nervous and didn’t have the courage to question their Principal's decision. It was Mackikan's favourite student, Yeshwantrao who stood suddenly and told the former that everyone is hungry and had not eaten food due to the eclipse. After patiently listening to his reason, Mackikan realised the problem and had to send everyone home early. Mackikan had offered to finance Yeshwantrao's higher education abroad. However, this offer was not accepted by his family.

Yeshwantrao then decided to learn the family business of architecture and started assisting his uncle Shaligram Jagannathji. As an assistant, he was not paid a salary at that time. Like his father, his uncle was also an Honorary Assistant Engineer, at the Public Works Department. One day the young Yeshwantrao was sent to do a survey of a small plot as an assistant. Coincidentally, a new British Officer from the same department went to survey the same plot. He was shocked to see a young boy doing this job. He immediately called him and checked his work. To his surprise, the survey done by the boy was perfect. After going back to the office, the new British Officer enquired about the boy and offered him a permanent job. At the beginning of his career, the 16-year-old Yeshwantrao was able to secure a job for a salary of Rs. 10 only. He belonged to the third generation of his family, who had worked with the Public Works Department. His grandfather Sadashiv Kalyanji (Desai) Wagholkar had also worked on a higher post in the same department.

A damaged historic image of the G.P.O|Suhas Desai

In 1910, he worked as an Overseer for the General Post Office (G. P. O.) building in Bombay. This building was completed at a total cost of Rs. 20,00,000. The Annual Report on Architectural Work in India for the year 1910- 11, by the Consulting Architect of the Government of India, credited its Overseer In-charge, Mr. Yeshwant Desai for the concrete dome of the G. P. O. and for the very able manner in which he had superintended this interesting and difficult piece of construction.

John Begg, F. R. I. B. A., Consulting Architect & Engineer of this building in his testimonials to Yeshwantrao says:

"I consider him a man well deserving of speedy promotion in the service. He has made a special study of the construction of architectural work, at which he is most efficient and reliable. Any Engineer or Architect who has such work to do will be most fortunate in finding himself with Mr. Yeshwant as his subordinate or Sub Divisional Officer."

Yeshwantrao was then introduced by him to Lord Hardinge at the function in the Museum. At that time, Yeshwantrao being a very simple man had worn a dhoti, white shirt, black coat, a patka on his head and a bhikbali (Maharashtrian men's ear ornament). On 5th June 1918, the collector of Bombay presented in a Durbar held in the Town Hall a Sanad of 'Rao Sahib' from the Viceroy and Governor-General in council for his services in connection with the war.

A damaged historic image of the Cotton Arch|Suhas Desai

King George V was the only British monarch who visited India twice. During his second visit, to attend the Delhi durbar, he landed at Apollo Bundar, Bombay on 2nd December 1911. After the opening of the Suez Canal, Bombay had become the first Indian port of call for ships sailing to the east. During this royal visit in 1911, a significant task was undertaken by Yeshwantrao. To welcome the King, the city was beautified with many arches. Out of the Saracenic, Persian and arches in other styles, the Cotton Arch was the costliest as it contained cotton bales worth about Rs. 3 lakh. This arch was built under Yeshwantrao's supervision. An inscribed Waltham Gold Watch was presented with the permission of the government by the Bombay Royal Visit Committee (1911) to Yeshwantrao for his service rendered in connection to this royal visit in the city.

The King and his consort were received near the present-day location of the Gateway of India.

At that time an Indo-Saracenic style white pavilion which consisted of a porch, a central nave and two side aisles, with gold-topped minarets was created to welcome them. The white pavilion was designed by the eminent British architect George Wittet, who later designed and replaced it with a permanent pavilion in stone.

This monument was erected to commemorate the landing of the royal couple in India. The present Gateway of India is an important monument built by the British under the supervision of Yeshwantrao in Bombay. The estimated cost was Rs. 26,54,665/-. Sir George Sydenham Clark laid the foundation stone of the Gateway of India on Monday, 31st March 1913. But it took 11 years to complete this beautiful triumphal arch. This pavilion at Apollo Bundar in Indo- Saracenic Style has a little replica, hidden in the small Bhendi Galli (lane) of Gamdevi in South Bombay. This miniature of the Gateway of India, was made in the same Malad stone (Basalt) and is found today below the Yashwant Siddhi Co. Op. Housing Society. This miniature model was perhaps used as a reference model for the main gateway and was probably close to its engineer's heart.

Buildings like the Institute of Science, the Prince of Wales Museum and the Gateway of India were designed by architect Wittet. At the same time, it is very interesting to know that it is Yeshwantrao who executed their construction. Wittet also gave a handwritten certificate to him, dated 30th October 1919 praising him with the following words:

A rare image of the Gateway under construction|Suhas Desai

"These buildings all presented problems in construction requiring skill & resource on the part of the clerk of works and I am glad to see in my long experience of Mr. Yeshwant I have never known him at a loss in his untiring energy and quick grasp of essentials overcoming all difficulties.

His tact and skill in managing the works and the work people have been important factors in the success of the buildings and I wish to record my appreciation of Mr. Yeshwant's high abilities and sterling qualities."

He was awarded a 'Silver Peace Medal' by Sir T. W. Birkett, Chairman, Peace Celebration Committee on 20th December 1919. He was further awarded the title of 'Rao Bahadur' on 3rd June 1922 and was also made a 'Justice of Peace' on 26th April 1924. He died at the age of 51 on 17th July 1927 at Panchgani.  Over time, his contribution to the city was forgotten but in the 1970s, to remember his contribution to the city of Mumbai, the Mumbai Municipal Corporation named a 'Chowk' near the Gateway of India 'Rao Bahadur Yeshwantrao H. Desai Chowk'.

The 'Little' Gateway still stands in the crowded lane, as a memorial to the Indian, who built Mumbai's 'British' buildings. 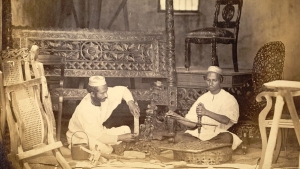 British Mumbai Bombay colonial British Raj
You May Also Like
Cover Story
Lakhuji Jadhavrao: The Portrait that Created a Flutter
By Manoj Dani
Lakhuji Jadhavrao is a well known character in Maratha history, but no one knew what he actually looked like
Cover Story
Baron Tavernier and the Curse of his Blue Diamond
By Ranvijay Singh Hada
The story of Jean Baptiste Tavernier, a 17th-century traveller who may have been haunted by his greatest find
Cover Story
Sri Ganganagar and why Paddy Grows in a Desert!
By Akshay Chavan
The Ganga Canal project transformed the desert of Bikaner into lush paddy fields.
Cover Story
The Lost Crown of Satara
By Manoj Dani
A chance find of a Royal Maratha Pagdi in Virginia USA, helped uncover the tale of the lost crown of the Marathas.
Support
Support
Each day, Live History India brings you stories and films that not only chronicle India’s history and heritage for you, but also help create a digital archive of the 'Stories that make India' for future generations.