Fans of the HBO series Game of Thrones will be familiar with Valyrian steel used to forge weapons that could kill the dreaded nightwalkers. Well, through most of history, Damascus Steel was Valyrian’s real-world counterpart. Prized for its strength and sharpness, it was coveted from the time of the Crusades in medieval Europe. But few know that ‘Damascus’ steel was actually from the Indian subcontinent!

So how did it get to Damascus and why was it named after the present-day capital of Syria?

When European Crusaders first landed in West Asia in the 12th and 13th centuries CE, pumped with religious zeal, they were met with soldiers wielding a sword that astounded them. Described as being able to cut a feather in mid-air and retain its edge through countless battles, they named this astonishing sword after the place where they encountered it – Damascus.

One of the Battles of the Third Crusade|Wikimedia Commons

Locally, it was called ‘Seric’ steel (‘Seric’ being derived from ‘Seres’, the Persian name for the ‘Chera’ dynasty in Southern India). Much later, British scholars referred to it as ‘Wootz’ steel, a mispronunciation of the Tamilian noun ‘Ukku’.

While the Europeans were talking about this excellent steel from West Asia, West Asians actually wrote about the Indian steel. The 12th-century Arab geographer Idrisi writes that nothing could surpass the edge of Indian steel, which he called ‘Hinduwani’.

What Is Damascus Steel?

Damascus Steel is a ‘superplastic’ steel made from ingots of Wootz steel produced in Southern India. This steel was known for its resistance to damage, its ductility and the ability to be sharpened to a razor-fine edge. It has a carbon component in the range of 1-1.5% and is a hypereutectoid, ultra-high carbon steel in modern-day terms. While regular or eutectoid steel has 0.8% carbon, hypereutectoid steel has more than 0.8 %, and in the case of Wootz, 1-1.2% carbon.

It was usually made in small batches in crucibles. One of the physical and very visual manifestations of this process is that the steel is characterised by a distinct visual pattern or design created due to the process of making it. The natural patterns formed, which are surprisingly elegant, have been described as being similar to sand moving across the desert or even waves moving over the surface of the ocean. This distinct pattern is often called ‘watering’ due to the pattern’s resemblance to moving water. The reason for this patterning is the formation of carbon nanotubes with the structure of the steel as a part of the forging process.

According to an article published in the journal Nature in 2006 by Prof Peter Paufler of the Technische Universitat Dresden, Germany, the forging process used in the making of this steel gave rise to the earliest known manmade carbon nanotubes. Thus Indian metalworkers were using nanotechnology at least 2,500 years before the West and exporting the same at least seven centuries ago, if not more.

Its History and Chemistry

Dr Sharada Srinivasan and Dr Srinivasa Ranganathan of the National Institute of Advanced Studies, Bengaluru, have worked extensively on the history, origins and chemistry of Wootz steel and have written extensively on it as well.

Live History India spoke to Dr Srinivasan, who shared some fascinating insights about Wootz steel with us. According to her, the fragments and specimens excavated at the Iron Age site of Kodumanal in Erode district of Tamil Nadu by archaeologist K Rajan and studied by Dr Srinivasan and her colleague Sasisekaran, point to the prevalence of higher carbon steels in Southern India (ranging from 0.8-1.3%C) going back to the Iron Age, roughly the mid-1st millennium BCE.

Besides these, Dr. Srinivasan has studied remnants of steel with 1.2% carbon in steel-making crucibles at Mel-siruvalur in the South Arcot district of Tamil Nadu. Rajan also studied a 6th century BCE sword found at Thelanganur in Tamil Nadu, with 1.2% carbon. These three sites along with some other fragments and pieces of evidence found in different parts of Southern India strongly suggest that the technology for creating viable, high-carbon steel existed in ancient India as early as the 5th century BCE, if not earlier.

According to Dr. Srinivasan, Wootz steel played an important role in the development of modern metallurgy. She says, “Since it was not known that it was the alloying of carbon to iron that contributed to the special properties of steel and Wootz steel, a range of alloying experiments were undertaken since the 18th century to understand its properties.”

This led to great strides in metallurgy. In fact, she says, this is what propelled scientists like Dr Michael Faraday (19th-century English scientist with extensive contributions to chemistry and physics) which gave rise to the field of alloy steels that contributed immensely to the Industrial Revolution.

Michael Faraday in his Laboratory|Wikimedia Commons

Damascus steel was closely studied. Dr Srinivasan says, “... due to the large macro-features of the pattern which could be easily discerned by the naked eye, Damascus blades were among the first artefacts to be observed under the microscope and promoted the emergence of the field of microscopy and metallography, as pointed out by Cyril Stanley Smith (20th-century metallurgist and science historian), who ranked Wootz/Damascus steel among the greatest of metallurgical accomplishments of antiquity.”

T L Lowe, a researcher from the University of California, Berkeley, wrote that many Sanskrit texts of the 7th to 13th centuries, on alchemy and chemistry on the Indian subcontinent, deal with the processing of plant and mineral materials in closed crucibles, the technique used to produce this steel.

Swords of Damascus steel were a prized possession of every armoury since the Mughals in the 16th century, perhaps even earlier. Visit any Indian museum and you are likely to come across Damascus swords, which were wielded by the great kings and warriors of medieval India. The sword of Tipu Sultan, in the National Museum, New Delhi, is also made of this legendary steel.

Dr. Srinivasan mentions that the Mughals, Rajputs, Nizams, Tipu Sultan, Mysore Wodeyars and Tanjore kings all had Damascus swords in their armory. She says that even the 17th-century French traveller Francois Tavernier talks of Golconda Wootz, which was apparently preferred by Persian artisans to make Damascus blades, with shipments of thousands of ingots being sent there.

The ductility of the Damascus sword was so famous that there are references to how swordsmiths could bend the most powerful sword into a perfect arc with both ends meeting!

Dr. Srinivasan tells us that the watery pattern was intrinsic to the structure of the metal and by etching in an acidic medium, the pearlite grains would etch darkly and the cementite network would remain unetched and show up as light, yielding wavy dark and light patterns, creating the ‘watering’ on the blade.

This watering became so characteristic of the blades that techniques were developed to replicate the watering pattern of the Damascus blades. In one of them, alternate layers of steel and iron would be hammered together. This technique, called Damascening, had a very prominent and visible watering pattern. These Damascened blades, however, were no match for the original Damascus steel.

Another technique that became popular in Rajasthan and the Mughal empire was that of ‘koftgari’. In this technique, the steel would be scratched with a very fine, cross-hatch pattern into which gold or silver wire was overlayed and then burnished. This, however, was a purely decorative technique.

Akbar’s shield with Koftgari work at the CSMVS |Niyogi Books

There are references to Wootz steel being produced in India till the 19th century. Interestingly, the British and Europeans were extremely interested in understanding and deconstructing this steel and studied and wrote about it extensively in the 19th and 20th centuries.

Josiah Marshall Heath, an English metallurgist and businessman who lived in Southern India in the early 19th century, studied the process of Indian steel-making and even wrote about it in the Journal of the Royal Asiatic Society of Great Britain and Ireland in 1939. He mentions the process of making the steel and also posits that Indian steel might be the oldest in the world. He says it was possibly exported to ancient Greece and Egypt and suggests that the hieroglyphics carved on Egyptian obelisks and temples may have been carved using tools of Indian steel.

Heath also mentions that Dr Francis Hamilton-Buchanan, who travelled across Southern India and wrote A Journey From Madras Through The Countries of Mysore, Canara and Malabar in 1807 describes in great detail and with great accuracy the process of smelting iron and making steel along with illustrations.

An illustration of the steel making process from Buchanan’s travelogue|Archive.org

Over the years, many Orientalist myths were attached to the making of the steel by Western individuals who encountered it and couldn’t understand the reason for its superior quality. According to one gory myth, the sword could be ‘quenched’ only by plunging it through the body of a strong, active slave so that the strength of the slave would be transferred into the swords.

However, the technology died out in the 19th century. Following the Revolt of 1857, many armouries were destroyed by the British. The coming of guns and gunpowder also changed the nature of warfare and reduced the demand for these blades.

Besides the production of the blade itself, the production of the steel too came under great pressure and finally ended under the colonial administration. Dr. Srinivasan points out that the application of the 19th century Reserve Forests Act in Telangana curtailed access to iron ore-rich forests of the Kammari iron smelters, due to which the practice slowly died out.

The Damascus steel sword may not be in use today but the allure of Damascus steel still exists and countless attempts have been made in laboratories across the world to replicate it. The most well known and successful attempt has been by John Veorhoven of Iowa State University and the late Alfred Pendray in the 1990s.

Damascus steel is a great example of technological advancements made by cultures and civilisations in the ancient East, something we forget in our Euro-centric worldview of scientific innovation. This Indian steel had captured the imagination, interest and allure through history – and it continues to amaze even today. It has been immortalized by poet and playwright Sir Walter Scott in his work The Talisman written in 1825. Here, he describes an encounter between Richard the Lionheart of Scotland and Sultan Saladin during the Third Crusade, where Saladin impressed Richard by cutting a handkerchief mid-air! 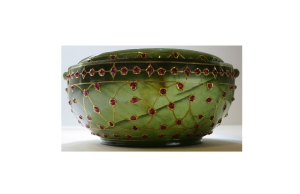