The Harappan city of Mohenjodaro in Sindh, quite literally, means 'Mound of the Dead'. But did you know that about 100 km from Karachi in Pakistan’s Sindh province lies one of the largest necropolises in the world – the Makli Necropolis?

Situated on the outskirts of the city of Thatta, it houses more than half a million tombs and graves, which bear testimony to the social and political history of the region between the 14th and the 18th centuries.

But before we get to this ‘city of the dead’, here’s a little on the history of Thatta, which once served as the glorious capital of Sindh and a great emporium of trade. What helped Thatta flourish was its location at the mouth of the mighty Indus river, which also gives India its name!

The term ‘Thatta’ is believed to have been derived from the Persian ‘teh ba the’, which means ‘layer upon layer’, as the city exhibits different levels of occupation. Another theory is that ‘Thatta’ comes from the Sindhi word ‘thatto’, which refers to a ‘riverside settlement.

Thatta witnessed several dynasties, starting with the Umayyad Caliphate whose general Muhammad bin Qasim captured the region in 711 CE after defeating the local Raja Dahir. This introduced Islam to the then largely Hindu and Buddhist region.

The Arab invasion was followed by the invasion of Mahmud of Ghazni in the early 11th century. This was one of the seventeen attacks that the Turkish-origin Sultan led on the Indian subcontinent between 1000 CE and 1027 CE. Under the Ghaznavids, a local chieftain, Ibn Sumar, seized power in Sindh and founded the Sumra dynasty, which ruled from 1051 CE for the next 300 years. In 1351, the Samma dynasty, assumed to have had Rajput descent, occupied the area and made Thatta their capital. This was the beginning of the heights Thatta was to scale in the coming years.

Mutahar Kara, a court poet of Firoz Shah Tughlaq, composed this verse in the 1360s when his emperor was twice unsuccessful in his attempt to subjugate Thatta:

Thatta which is an island, a country full of charms
On one side is a river and the other Punjab

Ruins of structures in Thatta|Wikimedia Commons

In 1520, the then Samma ruler Jam Feroz, was defeated by Shah Beg of the Arghun dynasty, which had moved eastwards after being displaced from Afghanistan by the expanding Timurid Empire. This rule was followed by the Tarkhan dynasty, whose ruler Mirza Jani Beg Tarkhan in 1592 submitted to Akbar’s commander, Abdur Rahim Khan-i-Khanan, and accepted the suzerainty of the Mughal Emperor.

The Mughals were intent on waging war on Thatta to capture its thriving seaports such as Lahari Bandar. The city was extremely well-integrated, not only internally but also with West Asian maritime networks in Arabia and Persia. Having command over Thatta also enabled them to safeguard the mouth of the Indus from possible Portuguese inroads.

During Akbar’s reign, Thatta became a chief centre for the ship-building industry along with Bengal and Kashmir. In the late 16th century, Abul Fazl, Grand Vizier and author of the Akbarnama, noted that the sarkar of Thatta had 40,000 big and small boats for navigation. This shows the extent of riverine trade that Thatta supported. Just as most of the merchandise was carried mainly on the Ganga from Bengal up to Agra, the Indus was the main waterway for merchandise from Lahore to Thatta.

Between Agra and Thatta, merchants generally used to hire carts to carry merchandise, especially indigo and sugar, up to Lahore or Multan, and from thence they used to carry it by the river to Thatta. In the imperial establishment, camels bred in Thatta were especially reputed for carrying burden. In 1639, from Agra to Thatta via Jaisalmer, a journey not more than 35 to 40 days, camels could be hired at 22 rupees i.e. at 2.66 rupees per maund (about 37 kg).

Emperor Jahangir mentions the pomegranates of Thatta. According to him, these were seedless but not very juicy. A particular variety of silk is also reported to have been produced in Thatta ‘from which excellent taffetas’ were made. In the 17th century, the city of Thatta had over 2,000 working looms. Leather goods embroidered with silk threads in a variety of colours were made in large quantities and were exported, particularly to Europe.

Swords, bows and arrows, saddles and boot-shoes manufactured here were also held to be among the best produced in India. An important product was carved wooden furniture decorated with ivory and ebony inlay. Much lacquer-ware was also produced. A Mughal mint was also set up to mint silver and copper coins.

All this attracted a number of scholars, poets and saints, who migrated here to seek the patronage of the rulers. This, in turn, helped Thatta grow into a famous centre of learning and, by the 17th century, it was one of the largest towns in the Indian subcontinent, with over 400 institutions training youth in theology, philosophy and politics.

Thatta’s cultural and economic significance yielded several monuments in and around the city, and the most distinguishable is the Makli Necropolis spread across 10 sq km. With a history of 400 years, from the 14th to the 18th century, this site was designated as a World Heritage Site in 1981.

Kings, queens, governors, saints, scholars and philosophers are buried here, in brick or stone monuments, some of which are lavishly decorated. Among the monuments found across Makli include tombs, canopies, enclosures, graves, mosques and khanqas, which are learning spaces where saints would teach and preach to their disciples.

According to legend, the necropolis took its name from a woman named ‘Mai Makli’, whose prayers were answered by God, and this prevented Firoz Shah Tughlaq from conquering Thatta. The locals thus revered her and she was buried at the site.

Another story has it that a traveller on pilgrimage to Mecca stopped here and, upon seeing a mosque just outside Thatta, fell into a state of ecstasy, repeating, “Hadah Makka li” (“This is Mecca, for me”). The well-known Sufi saint, Shaikh Hamad Jamali, named the place ‘Makli’ after this incident. This saint is also believed to be the first person to be buried here. The 14th-century Trakhan ruler, Jam Tamachi, venerated the saint and wished to be interred near the saint, beginning the tradition of using Makli as a funerary site.

Spread out in an almost diamond-shaped enclosure on a hill, the Makli Necropolis is divided into two major clusters – the Samma period in the northern area, and the Arghun/Tarkhan/Mughal periods along the southern border. While the Sammas are credited with being the first master builders of Makli and under whose reign Thatta became a flourishing city, the tombs belonging to the later periods (especially Mughal, between 1570 and 1640) are architecturally more significant.

Intricate design on one of the tombs|Wikimedia Commons

The structures, built of stone and brick, are notable for their fusion of diverse influences into a local style, for instance, a synthesis of Muslim, Hindu, Persian, Mughal, and Gujarati architectural designs. In some of the larger, more elaborate monuments, distant Persian and Asian examples of intricate masonry can be found. Unusually, some of the tombs feature carvings of animals, warriors, and weaponry – a practice uncommon in Muslim architectural designs.

Probably the most outstanding tomb, almost like the crown jewel of the site, is that of Samma ruler Jam Nizamuddin II (r. 1461-1509). It is constructed of sandstone and decorated with floral and geometric medallions. It has a minutely carved jharokha and the outer walls have bands of motifs that feature Quranic verses and Hindu symbols. Interestingly, his adopted son known for his military expertise, Darya Khan’s tomb can easily be mistaken for a small fortress.

The Tarkhans liberally used ceramics in their monuments as can be seen on the tomb of Jan Beg Tarkhan (d. 1600), the dome of which is covered in blue and turquoise glazed tiles. The tomb of Isa Khan Tarkhan I is a fresh breakaway from the typical funerary architecture of the times and displays a new cenotaph-style. It also has an area dedicated to the graves of five of his royal ladies.

From the Mughal period, the most noted structure is that of the Mughal governors of Thatta – Diwan Shurfa Khan (d. 1638) and Isa Khan Tarkhan II (d. 1651). The latter’s mausoleum is almost palace-like, with a two-storey building complete with cupolas and balconies.

Makli is a perfect example of how, with time, a dynamic living place of veneration, assembly and recreation can fall into stagnation. Thatta possibly started declining in importance when salt siltation blocked the port and the Indus changed its course, leaving the Mughals to concentrate on the other ports of the Empire. Under the British, though the communication infrastructure of Thatta was improved and Sindh became an important province, the lost prosperity of the city could not be revived.

Today, in spite of its designation as a UNESCO site and imposing beauty, the Makli Necropolis is not well known to the world. Besides some tombs that are standing tall, most of the structures are in dire need of attention and restoration. 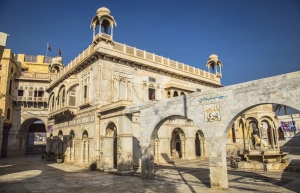