It is well known that Tamil is one of the official languages in Singapore because of the large population of people of Indian origin who made the island their home over the last few hundred years. But did you know that the very name ‘Singapore’ comes from ‘Singha’ and ‘pura’ (‘The City of Lions’), underlining the country’s India connection?  And the earliest reference to this comes from the 13th century.

The 15th century annals of the Malay kings, Sejarah Melayu, tells the story of the founding of Singapore and its connection with a legendary king named Shulan from Kalinga!

One of the most comprehensive accounts of Singapore’s early history is by noted archaeologist and historian, John N Miksic, from the National University of Singapore. In his book Singapore And The Silk Road of the Sea 1300-1800 (2013), Miksic mentions how even historically, the importance of Singapore stemmed from its strategic geographic location, at the southern tip of the Malay Peninsula.

For centuries, the Malay Peninsula, Singapore and the Sunda Islands (in Indonesia) acted as an important confluence of Chinese and Indian cultures in South-East Asia. The winds from the Indian Ocean brought traders from India carrying cottons, muslin, metal-ware and incense, while the winds from the South China Sea brought Chinese merchants trading in silk, damask, porcelain and pottery. Miksic refers to this trade as the ‘The Silk Route of the Seas’.

These trade routes, governed by the maritime rhythms of the winds, also ensured that Singapore became an essential port of call for early travellers going from India to China and vice-versa. These travellers ended up spending a considerable amount of time (up to a few months at a time) in Singapore and the Malay Peninsula. This resulted in marriages between travellers (Indian and Chinese) and the local Malays, which in turn led to the cross-cultural exchanges reflected in the tangible and intangible heritage of the two regions even today. Ancient Indian traders and travellers, impressed by the wealth and prosperity of the wider South-East Asian region, gave Singapore the name ‘Suvarnadwipa’ or ‘Island of Gold’.

Pre-13th century chronicles refer to the island of Singapore as ‘Temasek’ or 'Sea Town'. From the 7th to the 13th centuries, it was part of the Srivijaya Empire, which ruled over large parts of Java, Sumatra and the Malay peninsula. It was one of the wealthiest and most powerful maritime empires to emerge in South-East Asia, controlling maritime trade routes between India and China. The ports of the Srivijaya empire, including Temasek, were important not only for trade, but also for the Buddhist monks and students, who travelled back and forth between India and China.

Drawings of the fragments of the Singapore Stone |Wikimedia Commons

One of the oldest surviving relics that proves the ancient links between India and Singapore is the ‘Singapore Stone’ – a fragment of a large inscription slab which stood at the mouth of the Singapore river till 1843, and was blown to smithereens by the British to widen the mouth of the river. The surviving fragments, preserved in the National Museum of Singapore, reveal that the inscription is in one of the Indic languages – Sanskrit, Tamil or Old Javanese and dates back to between the 10th and 13th centuries. Sadly, these fragments have not been deciphered and a critically important part of Singapore’s history remains unknown to us.

It is in the 13th century that the island came to be known as ‘Singhapura’ or the ‘The City of Lions’. In 1436 CE, an unknown author living in the port of Malacca (in present day Malaysia) compiled a chronicle of Malay Kings known as Sejarah Melayu or the Malay Annals. According to a tale mentioned in the annals, Raja Shulan of Kalinga in India, a descendant of Alexander the Great, set out to conquer China and set sail with a large naval armada. When he halted on Temasek island, a spy sent by the frightened Chinese tricked him into believing that China was too far away. So Raja Shulan married a fairy princess and settled there.

According to the Malay Annals, in 1299 CE, Raja Shulan’s descendant, Sang Nila Utama, landed on the island, saw a lion there and named the place ‘Singapura’ or ‘The City of Lions’. While parts of the story are undoubtedly fantastic, they nonetheless indicate strong linkages.

Miksic also shares some interesting perspectives on the annals and the story. For instance, he believes that the story of the naval expedition of Raja Shulan may have been based on a lingering memory of the expedition of Chola king Rajendra Chola I, who launched an attack on the Srivijaya empire in 1025 CE. For example, the Annals state that Shulan was from “Nagipatnam in the Kalinga country”, referring to Nagapattinam in Tamil Nadu.

Further, King Shulan is also said to have conquered the kingdom of “Gangga Syah Nagara”, which the Annals claim was located in Perak (in Malaysia). Interestingly, Rajendra Chola I had conquered the regions around the Ganga river and founded the city of ‘Gangaikondacholapuram’ as his capital. This points to connections between Rajendra Chola I and King Shulan of the Malay legends. 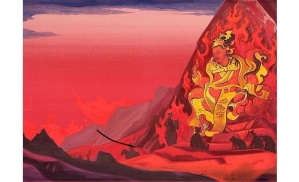 Miksic points out that the story also underlines Temasek or Singapore’s role as a traditional meeting place for visitors from India and China. Iterating the linkages, Miksic also points out that ‘Singapura’ was a fairly common name for towns in the ancient Indic world as it appears in the Buddhist Jataka Tales, and even in some versions of the Ramayana, as the remotest place where Lord Rama went searching for Sita. In conclusion, Miksic believes the transformation of Temasek to Singapura, in the 14th century, was part of the ‘Sanskritisation’ process, through layers of Indian influence.

The Malay Annals state that under Sang Nila Utama’s descendants, “Singapura became a great city, to which foreigners resorted in great numbers, so that the fame of the city and its greatness spread throughout the world”. It goes on to record that it was Utama’s fifth descendant who accepted Islam around 1389-91 CE and became known as Iskander Shah.

He shifted his capital to Malacca (in Malaysia) and, thus, Singapura lost its political importance, but continued to be an important trade hub, now for Gujarati Muslim merchants and Sufi preachers from India, who were pivotal in the spread of Islam in the region. However, in 1613, the Portuguese attacked and burnt down the settlement at the mouth of the Singapore river and, after that, Singapura slipped into insignificance.

A new phase of Singapore’s history began in 1819, when Sir Stamford Raffles of the British East India Company established his base on the island. With the British dropping anchor there, a new phase in Singapore’s relationship with India began, while old links were forgotten.

trade Kalinga Singapore
You May Also Like
Cover Story
Heritage Matters: India’s Lost Capitals
By Nehal Rajvanshi
India was home to many world-class cities in ancient times but most of them are now just footnotes in history.
Cover Story
Satyananda Stokes and the Apple State
By Mayur Mulki
The story of an American, who brought apples and much more to Himachal Pradesh
Cover Story
Najaf and Lucknow: Faith Across Borders
By Akshay Chavan
Shah Najaf Imambara of Lucknow was an attempt by a Nawab to ‘bring’ Najaf to Lucknow.
Cover Story
Cowries and the Slave Trade in Bengal
By Devasis Chattopadhyay
The story of the rise and fall of the kaudi or cowrie in Bengal
Support
Support
Each day, Live History India brings you stories and films that not only chronicle India’s history and heritage for you, but also help create a digital archive of the 'Stories that make India' for future generations.