But did you know that within a radius of 50 km from here, you will also find the oldest mosque and oldest church in India alongside some really ancient temples? This is because this area, said to be the site of the famed ancient Indian port of Muziris, was a cosmopolitan trading hub more than 2,000 years ago.

But why here? The reason lurks in your kitchen cabinet – pepper. In the ancient world, pepper’s qualities as a food preservative (especially for meats), quite literally, made it worth its weight in gold. Since Kerala was its only known source then, traders from across the globe made a beeline for the Malabar Coast.

The most significant port here was Muciri or Muziris, as the Romans called it. This port played a critical role in the first-ever trans-oceanic exchange of people, goods, ideas, culture and technology between various regions in the Mediterranean, Red Sea and Indian Ocean rim, from roughly 300 BCE.

Originally situated at the mouth of the Periyar River, this port was a subject of marvel in many classic works. Roman author and philosopher Pliny the Elder (23-79 CE), in his Encyclopaedic Naturalis Historia, extolled Muziris as ‘primum emporium Indiae’, or the ‘greatest window into the best of India (goods)’.

A Tamil anthology from the Sangam period, Purananuru, speaks of Muciri as ‘the city that bestows wealth on its visitors’, and as a treasure-house where sacks of pepper were piled up alongside heaps of gold. The Periplus of the Erythraean Sea, an anonymous work from the 1st century CE, also mentions Muciri as a haven for vessels from various parts of the world.

The commodities that passed through this port included spices, gold, precious stones, ivory and textiles.

Being a hub of international trade, Muziris also attracted scores of merchants from far and wide. Legions of Roman, Greek, Dutch, Portuguese, Chinese, Jewish and Arab traders came here and many made it their home.

Legend has it that one famous visitor was Judas Thomas, one of the Twelve Apostles of Jesus, stepped ashore in 52 CE. He is said to have converted 11 prominent families in the region to Christianity. Members of the Syrian Christian community in Kerala trace their origin to him.

St Thomas went on to found seven churches in the region, with Kottakkavu Mar Thoma in the heart of Paravur town considered the first among them, and consequently the oldest in India. The church has since been rebuilt many times. A wooden cross said to have been placed in the original church by St Thomas was kept in it till the 18th century, till Tipu Sultan’s attack on the Malabar resulted in the demolition of various churches.

Around 17 km from the oldest church in India, in the Methala area in Kodungallur, you will find the oldest mosque in India.

Typical of the local architecture – two-storied with a sloping tiled roof – the Cheraman Juma Mosque wears a modern look and a fresh coat of paint as it has been renovated many times.

Its ancient inner core and an equally ancient part of the roof with stylized sharp edges have led many to believe that the structure is very old. Locals believe the mosque has been standing here since 629 CE.

This mosque, built almost 500 years before the earliest one from the Sultanate period in North India, indicates just how old the Islamic influence is in coastal Kerala, probably from the time of the Prophet itself.

Structure of the old mosque  |Challiyan via Wikimedia Commons

It was the Arab traders who first brought Islam to Kerala. Suleiman-al-Tajir, a 9th-century Arab traveller, who wrote the Silsilat-ut-Tawarikh (Account of India & China) in 851 CE, mentions in his chronicles that there was a small population of local Muslims in Kerala. Ibn Haukal, a 10th -century Arab traveller and geographer, refers to mosques where Muslims offered prayers.

The discovery of an Islamic inscription from 782 CE at Pantalayini in Kollam, near Quilandy, in Kozhikode district, corroborates this. According to literary records, mosque architecture in Kerala reached its zenith between the 13th and 16th centuries, which was also the period of Arab supremacy in the maritime trade with the Malabar.

Malik-Ibn-Dinar, an Arab trader who frequently visited the Kerala coast and was granted land by a local king, is said to have built the Cheraman Juma Mosque as well as eight others on the coast.

Local Muslims in Kerala believe that King Cheraman Perumal, after whom the mosque is named, converted to Islam and travelled to Arabia and took the name Tajuddin.

He died on the way back and was buried in Salalah in Oman, where a dargah dedicated to him stands even today.

The Jews of the Malabar also have deep roots in this sliver of coastal Kerala. Words of Tamil origin found in the Hebrew Bible have led some to suggest that ships of King Solomon, the third King of Israel, must have visited Muziris as far back as the 10th century BCE.

While historians consider these to be just Biblical accounts, the old Jewish community in Kerala itself believes that they came to the Malabar Coast in North Kerala after the destruction of the Second Jewish Holy Temple in Jerusalem by the Romans in the 1st century CE. They claim that 10,000 Jews were graciously received by the then Hindu ruler of the region and they were allowed to settle in different parts of the country. The bulk of the Jews settled in Kodungallur, earlier known as Cranganore, around 29 km north-west of Kochi. This was close to Muziris.

The Jews lived in Kodungallur for a long time, and it is only in the mid-14th century that they moved to Cochin. During this time, there was a fresh wave of migration of other Jews to Cochin, from countries like Iraq, Syria and Turkey. Smaller groups came from Yemen and Germany. These Jews were referred to as the ‘Paradesi Jews’ or ‘White Jews’.

Interior of the Paradesi Synagogue| Wouter Hagens via Wikimedia Commons

One of the prominent written records of the presence of Jews in Cochin is the copper plate records issued by the Chera king at Kodungallur, Bhaskara Ravi Varma (Parkaran Iravivarnam). Although the traditional date of the plates according to the Jews is 379 BCE, the accepted date of this inscription is 1000 CE as suggested by Dr M G S Narayan, historian and former chairperson of the Indian Council of Historical Research.

These plates, also called the Jewish Copper Plates of Cochin, record a royal grant to the Jewish chief, Joseph Rabban, to the rights of Ancuvannam (Anjuvannam) along with 72 proprietary rights enjoyed by high-ranking nobles of the Chera kingdom.

Though both the old and the newer Paradesi Jewish communities lay claim to the right over these copper plates, they are currently housed in the Paradesi Synagogue, which was built in 1568 CE. This is the oldest functioning synagogue in India.

Records show that a great flood in 1341 CE radically altered the coastline, shifting the mouth of the Periyar River a mile or two north. The old port of Muziris thus silted up and the port’s run as a trading hub came to an end.

Numerous attempts have been made to locate the famous old port of Muziris but its exact location remains a point of contention. After nine seasons of excavations, which first started in 2007, archaeologists unearthed a brick-lined wharf studded with teak bollards, some Roman amphorae and glassware, as well as medieval Arabian glazed pottery and Chinese porcelain from the hamlet of Pattanam on the south bank of the present estuary. This led archaeologists to suggest that this site could have been Muciri or Muziris. Others claim that while Pattanam may have been a part of the famed port city, the evidence doesn’t conclusively prove that this was the core of the ancient trading hub. 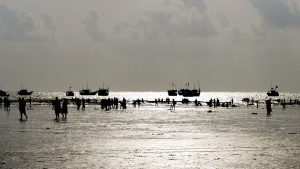 Even though Muziris sailed into the sunset, the communities who made this area their home over the centuries live on – as does their faith.