A slice of Arabia that was a part of Bombay! It’s hard to imagine but for about a century, from 1839, the port of Aden in Yemen, on the southern tip of the Arabian peninsula, was part of British India and administered from Bombay. It even used the Indian rupee as a currency during that period.

Aden's connection with India was due to its pivotal role connecting the Indian subcontinent to the trading centres of the West, from the time of the Roman Empire, 2000 years ago. It is strategically located at the confluence of the Red Sea, the Indian Ocean and the Arabian Sea, and eventually linked them to the Mediterranean when the Suez Canal was built.

Aden is located smack opposite the Mangalore port in India|LHI

One of the earliest written references to this link comes from the 1st century BCE, in the book Periplus Of The Erythraean Sea, which gives a detailed description of the coastlines around the Indian Ocean and the major port cities in these parts. It says-

But this was only the beginning of the economic exchange between Aden and India. Trading ties between the two continued long after the collapse of Rome. They reached their zenith under the Mamluk Dynasty of Egypt, who ruled between the 13th and 16th centuries.

With India being a forerunner of maritime trade thanks to its two long coastlines jutting into the Indian Ocean, and the port of Aden being situated in a natural bay, the two were destined to make history together. The commodities exported from India included spices, iron, sugar, precious stones, wheat, cotton, betel nut, sandalwood etc. After they arrived in Aden, they were taken to Africa, Europe and the rest of the Arab world. The commodities imported into India included incense, Arabian horses, gold and dry fruits, among other products.

The Portuguese fleet in Aden|Wikimedia Commons

But things changed when the old leaders of global trade were replaced by the Europeans, especially the Portuguese and also the Turks. This change in the balance of power in the Arabian Sea, from Arab traders to Europeans, which was brought about quite decisively by the Battle of Diu (1509), also gave rise to other ports like Mocha (known for coffee) and Jeddah.

Also, the rise of the Ottoman Turks and their conquering of the interior of Yemen in the 16th century reduced Aden to little more than a pirate village preying on Indian Ocean traffic. For about 300 years, Aden remained in the shadows, until an incident changed its course again.

On 20th February 1837, a ship named Daria Dawlat, eight weeks out of Calcutta and bound for the port of Jeddah, was shipwrecked just outside Aden’s harbour on an otherwise clear night.

It was laden with cargo and pilgrims and belonged to the Nawab of the Carnatic’s mother, Ahmad-ul-Nisa.

Historians believe that the ship was deliberately set aground as part of a complex conspiracy between the Nawab and the then ruler of Aden, Abdali Sultan of Lahej.

Since the ship had sailed under British colours, the East India Company took it as an insult and decided to confront the Sultan. The economic significance of the port was also not lost on them. As India grew in importance, the British sought to secure access to and from its most important colony. Aden, with one of the finest harbours between London and Bombay, could serve as a perfect coaling station for the newly introduced steamships.

The port of Aden|Wikimedia Commons

So, the Company sent a political agent named Stafford Bettesworth Haines to initiate talks with the Sultan. He was more than ready to enter into an offensive-defensive treaty with the British, like that of the Native Princes of India. He offered dual authority of the port and allowed the British to establish a factory in exchange for an annual subsidy. Haines did not agree as the British wanted complete control of the port. After a year of failed negotiations, the frustrated Company stormed the port and occupied Aden on 19th January 1839. This became the first British colonial acquisition in the Victorian era.

A garrison of 2,000 Indian soldiers was established in Aden and the port city was to be governed as a part of British India. In 1850, it was declared a free-trade port with the liquor, salt, arms and opium trades developing duties. With Aden in their grasp, the British also now controlled the coffee-exporting trade, leading to the decline of Mocha.

Two more developments in the mid-19th century further strengthened Aden’s position in the region’s maritime trade. First, the setting up of a telegraph link between Britain and India in 1859 greatly improved communication between Britain and her most prized colony; and second, the opening of the Suez Canal in 1869 meant that ships from Britain bound for India no longer had to sail around Africa and the Cape of Good Hope.

Travel time shrunk by months and, given its location at the southern tip of the Red Sea, Aden was ideally placed for another change in fortune. Her revenue increased eight-fold, and the port city was transformed into an entrepot for trade between Europe, Asia and Africa.

Indian traders and merchants did not lose any time exploiting the new commerce.

Soon, a large part of Aden’s population consisted of people speaking Gujarati, Marathi and Hindi. The most prominent Indian – and one of the first to arrive in Aden, in 1845 – was the Parsi merchant Cowasjee Dinshaw, whose name later acquired the suffix ‘Adenwala’. He is credited with remodelling the port to handle steamer traffic. At the turn of the century, his son Hormusjee expanded the business, eventually acting as bankers, naval agents, ship owners and managing agents for mills and steamship companies.

A bazaar in Aden, 1920s|Wikimedia Commons

Aden continued to be a stopover for travellers coming through the Suez to India. Among the most famous of these travellers was the deposed ruler of Punjab, Maharaja Duleep Singh. Exiled to England in 1854 after the annexation of his kingdom, he had yearned to return to Punjab. In 1886, he began his journey back home but was arrested at Aden and deported back to London.

In 1931, Mahatma Gandhi stopped at Aden for a couple of days on his way to London for the Second Round Table Conference. At the time of India’s independence in 1947, Indians residing in Aden too unfurled the tricolour with pride.

In 1950, a teenager made his journey here to work as a clerk for Besse & Co, which later became distributors for Shell and their petroleum products. This young man dreamt of building an oil refinery back home and transformed into the business tycoon Dhirubhai Ambani. 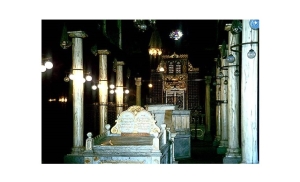 When the British left Aden in 1963, there was an upsurge of resentment among the local Arabs against the dominance of the Indian business community. Due to a sustained campaign of terror, the Indians in Aden were forced to migrate to places such as Dubai, London, etc. However, the age-old ties live on in the 300,000 Indians of Yemeni origin, in Hyderabad and other cities in Andhra Pradesh, and in Maharashtra, Gujarat and Karnataka.

Likewise, there is a strong 200,000 Indian-origin diaspora in the provinces of Aden, such as Hadramout, Hodeidah, Taiz and Sana’a. Take a walk along the streets of this port city and you cannot miss the many temples there and the aroma of tandoori parathas left behind as a legacy of the city’s rich Indian connection.

The British government in India considered Aden as a safe heaven to incarcerate Indian freedom fighters, on the same lines as they used the Andaman & Nicobar Islands as the infamous ‘Kala Pani’, far away from the sight and minds of people.

One of the earliest and well-known cases of confinement of Indian revolutionaries in Aden pertains to that of Vasudeo Balwant Phadke in 1880, who was the first freedom fighter to conceive ‘swaraj’ or an Indian Republic, as the only answer to rid India of its foreign occupation.