The Chandelas were initially feudatories of the Gurjara-Pratihara dynasty (8th - 11th century), which ruled much of Northern India from their capital Kannauj. Harsha, the sixth Chandela ruler, asserted his independence and, after that, the Chandelas ruled much of present-day Bundelkhand (then known as ‘Jejakabhukti’) from the 10th to 13th centuries. Their strongholds were the famous fortress of Kalinjar (Uttar Pradesh), together with Khajuraho, Mahoba (Uttar Pradesh) and Ajaigarh (Madhya Pradesh).

A sculpture from Khajuraho|Wikimedia Commons

The Parshvanatha Temple, believed to have been built by a Jain family, features an inscription with a ‘magic square’. This is one of the oldest 4x4 magic squares displayed in the world. It contains all the numbers from 1 to 16 and the sum of the numbers in every horizontal row, every vertical column and the two diagonal rows, is 34. 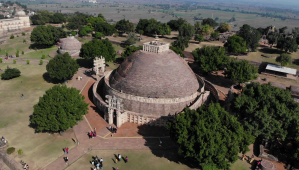 hindu Madhya Pradesh temples Sculptures Jain Monuments Khajuraho history of india erotic Chandela
You May Also Like
Snapshort Histories
Kurumbera: The Fort That Never Was
By Deepanjan Ghosh
In a remote part of West Bengal is an oddity of history. Was it a temple, a mosque or is it a fort?
Amazing India
Sultan Ghari:  India’s Oldest Islamic Tomb
By Aditi Shah
The mausoleum of Prince Nasiruddin Mahmud of the Slave Dynasty is a historic gem
Amazing India
Diu: A Historic Island Outpost
By Aditi Shah
The spectacular story of this picturesque town on the west coast of India.
Cover Story
Pilibhit: A Forgotten Capital
By Rehan Asad
The small town tucked away in the edge of UP was once the capital of the once powerful Rohilla confederacy
Support
Support
Each day, Live History India brings you stories and films that not only chronicle India’s history and heritage for you, but also help create a digital archive of the 'Stories that make India' for future generations.