For most architects today, this would be a dream project, for the Kailasa temple at Ellora is considered one of the most spectacular rock-cut monuments in the world. Carved from a single, gigantic rock face, the temple’s sheer size and sculptural treatment are breathtaking. But there is another reason this temple is a world-class wonder – it was carved vertically into the tough basalt of the Sahyadri Hills with little more than hammers and chisels, more than 1,200 years ago.

The Kailasa Temple is one of 100-odd rock-cut cave temples and monasteries at Ellora (Verul to the locals), around 30 km north-west of Aurangabad in Maharashtra. Collectively called the ‘Ellora Caves’ – one of the largest religious cave complexes in the world – all the caves are sculpted into a basalt cliff-face and spread across a 2-km area. However, only 34 of them are accessible to the public. These shrines and monastic complexes, which boast beautiful figures and motifs intricately carved into stone, comprise 12 Buddhist caves, 17 Hindu temples and 5 Jain temples built between 600 CE and 1000 CE.

Sketch of the Kailasa temple|Wikimedia Commons

Since ancient times, caves and monastic complexes have always been built along trade routes as this allowed monks, ascetics and mendicants to travel long distances along with traders, while they also acted as rest stops for traders and merchants. In return, these cave complexes were patronised and funded by wealthy merchants. Ellora was located on an ancient South Asian trade route, which made it an important commercial centre in the Deccan region, and the caves here received even royal patronage.

While all the caves at Ellora are worth visiting, the Kailasa temple – simply designated as Cave No 16 – is by far the most magnificent and imposing. Built by the kings of the Rashtrakuta dynasty, which ruled parts of South India between the 8th and 10th century CE, the Kailasa temple is the largest of the rock-cut, monolithic Hindu temples at Ellora. It represents Mount Kailasa or Kailash, the Himalayan abode of Lord Shiva.

The top (shikhara) of the Kailasa temple|Wikimedia Commons

To build the temple top-down, three massive trenches were first dug vertically into the basalt. Since there were no jack hammers in those times, an army of men with hammers and chisels hacked and hauled away 2,00,000 tonnes of rock. It was only after this stage that artisans set to work, slowly descending as they sculpted the individual structures in the temple complex, which include the main temple, the shikhara (the tower built over the sanctum), free-standing pillars, large statues and individual shrines. As the artisans went lower and lower, they also added the mind-boggling sculptural details on the exterior and interior surfaces of these structures,

The arcade of the Kailasa temple|Wikimedia Commons

But why build vertically, from the top down? Why not build it horizontally, starting with the façade, which is how most monuments are built? The closest we come to an explanation is a legend in the 10th century Katha Kalpa Taru, which refers to an 8th century queen of the Rashtrakuta ruler, Elu. According to the legend, the king took ill and his queen prayed for a cure. If her wish was granted, she promised to abstain from eating till a magnificent temple was built for Lord Shiva and she saw its shikhara (top).

Her prayer was granted and the king invited the best architects in the land to submit their plans to construct a grand temple dedicated to Lord Shiva. The architects came up with blueprints for elaborate temples and the king was impressed. But there was just one hitch – it would take months to execute any of these plans and that would mean his queen would starve before the temple was completed!

Finally, an architect named Kokasa from Paithan came up with an ingenious plan – he suggested that the temple be carved from top to bottom. They could, therefore, start by sculpting the shikhara and the queen, on seeing the top of the tower, could break her fast within a few days.

Most of the temple’s construction is attributed to 8th century Rashtrakuta King Krishna I. The Rashtrakutas came to power in the Deccan by overthrowing the Chalukyas of Badami in 753 CE and establishing their capital in Gulbarga in Karnataka. The Kailasa temple has features of Dravidian architecture or South Indian temple-style architecture as there were Chalukyan and Pallava artisans involved in its construction.

The Kailasa temple appears to have been built in stages. Scholars believe that Krishna I (r. 757-773 CE) built the major portions of the temple – the central temple, the Nandi shrine and the gateway. But it is possible that construction had begun under his predecessor, his uncle and founder of the Rashtrakutas, Dantidurga (r. 735-757 CE) as Cave No 15 or the Dashavatara Cave nearby bears an inscription from him. Besides, its reliefs feature the same style as those in the Kailasa temple. Some parts of the temple complex have been dated to later rulers.

The idol of Gajalakshmi at the entrance
|Wikimedia Commons

The vertical excavation is evident as soon as you set eyes on the monument. A two-storey gateway opens to reveal a U-shaped courtyard. Most of the deities left of the entrance are Shaivaite, while the deities to the right are Vaishnavaites. Facing the entrance is a panel of Gajalakshmi seated on a full-bloomed lotus in the midst of a lotus pond, while the elephants above pour water by a ritual adoration.

The Nandi mandapa and main Shiva temple are each about 7 metres high, and built on two storeys|Wikimedia Commons

The main mandapa (hall) is supported by 16 pillars. In front of it, and connected by a bridge, is a mandapa for Shiva’s vehicle, Nandi, the bull. On each side stands a pillar or dwajastambams, 45 feet tall. Trishuls (tridents) were once placed on these pillars. There are five detached shrines in the temple complex, three of them dedicated to river goddesses Ganga, Yamuna and Saraswati.

Through intricate sculptures and carvings, every section of the complex tells stories from mythology, depicting different Puranic episodes. There are also panels comprising seven rows each, depicting scenes from the Ramayana and the Mahabharata. One of the most elaborate sculptures is that of Ravana shaking Mount Kailasa.

Other notable sculptures are that of Shiva and Parvati playing dice; a Varaha-raising Prithvi; Narasimha tearing the body of his enemy; Durga-trampling demon Mahishasur, etc. On some parts of the roof, there are remnants of paintings that originally adorned the entire temple.

Remnants of paintings on the ceiling|Wikimedia Commons

The Kailasa temple at Ellora is considered a high point in rock-cut architecture in the subcontinent. Stand beneath the curtains of stone that cascade from the cliff above and imagine scores of artisans chiselling away at the rock, with every tap of the hammer giving shape to the marvel that meets your gaze in a magnificent fusion of man and nature. 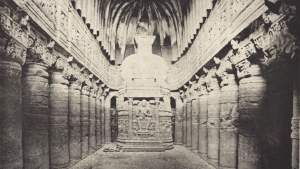 Shiva Ellora Architecture Maharashtra Sculptures Monuments Kailasa Temple rock-cut
You May Also Like
Amazing India
Shettihalli Church: India’s Only ‘Floating Church’ in Karnataka
By Deepanjan Ghosh
Rising from a river in a village in Karnataka are the haunting remains of India’s only ‘floating church’.
Amazing India
Bandhavgarh Fort: Of Tigers & Kings
By Nehal Rajvanshi
Did you know that a 2,000-year-old fort inside the Bandhavgarh National Park was the seat of many royal dynasties?
Amazing India
Hetampur: A Tiny Royal Gem
By Sk. Abdul Amin
Find out why this royal abode and other relics of the Hetampur Raj are marooned in a village in Birbhum district
Amazing India
Najafgarh: A Kingmaker in the Capital
By Barun Ghosh
Najaf Khan, a Persian military adventurer restored a Mughal Emperor to the throne and reclaimed the Mughal Empire
Support
Support
Each day, Live History India brings you stories and films that not only chronicle India’s history and heritage for you, but also help create a digital archive of the 'Stories that make India' for future generations.