Kolkata Cemetery: What the Dickens!

Thanks to its status as the imperial capital of India, there are several historic and literary heavyweights who have a Kolkata connection. Many of them are buried in this city, having come here to either serve, or to lead, make their fortunes or simply start life afresh in this new land.

Among these worthies – or the sons and daughters of worthies – is a lad who wasn’t exactly the apple of his father’s eye but who was nonetheless the son of one of the greatest writers of the Victorian era – Charles Dickens.

What’s more, while his grave is in Bhowanipore Cemetery on Debendra Lal Khan Road at Bhawanipur, his headstone is in South Park Street Cemetery, not far away, on Mother Teresa Sarani or the old high street of Kolkata. This is the unfortunate tale of Walter Landor Dickens.

Walter Landor Dickens was born at Devonshire Terrace on the 8th of February, 1841, a day after his father’s 29th birthday. He was the fourth child of Dickens and his wife Catherine, and their second son. The few details that we have about his life emerge from the books Great Expectations: The Sons And Daughters of Charles Dickens by Robert Gottlieb (2012), and from Charles Dickens Resurrectionist by Andrew Sanders (1982).

About his newborn child, Dickens wrote, “All I know is that he has large dark eyes, and no nose at all as yet – except that he seems to live in a state of perpetual intoxication and sleepiness – is very fat – and looks when he is being washed, like a plucked turkey.” Walter was named after the English poet and activist Walter Savage Landor, who was also the child’s godfather.

From early on, Dickens seems to have had little faith in the abilities of his son. While he enjoyed writing as a child, Dickens discouraged him from taking it up as a profession, because in his opinion Walter, in the words of English biographer Lucinda Hawksley, “did not have the aptitude or ambition to work at it as hard as he would need to in order to succeed financially”. He did not even believe that Walter should follow his elder brother Charley to Eton.

Walter was a cheerful, happy and good-looking child. His high cheekbones earned him the nickname “young skull”. But he was perhaps a little too energetic for his father’s liking. His father complained that he made too much noise jumping up and down the stairs. By the time he was nine, Dickens was writing to his close friend Angela Burdett-Coutts about his future.

She suggested that Walter was better suited to a military life and agreed to sponsor him for an East India Company cadetship. Dickens believed that Walter would “strive on and do well in India”. A year later, he was sent off to a certain Mr Trimmer in Putney, in south-west London, who educated young men “expressly for India”.

While at Mr Putney’s, there was an incident where the young boy threw a chair at a nurse and was punished for it. But two years later, Dickens wrote to Walter Savage Landor, that the boy had come home with an “honourable commendation”. By the age of 15, he was ready to take the exams for his East India Company cadetship. In April 1857, Dickens wrote to Burdett-Coutts that Walter had “passed his examination on Tuesday in a most creditable manner”. Dickens wrote that he was planning to have the boy taught swimming, riding, fencing, shooting and even “a trifle of Hindustanee”.

Soon after, Walter was able to obtain a direct appointment with the East India Company through the influence of Angela Burdett-Coutts. On 20th July 1857, Walter sailed to India on board the Indus. He was 16 years old and his family went to Southampton to see him off. Almost exactly a month before Walter had set sail, the first news of the Revolt had reached England, on the 26th of June, 1857.

By the time the Indus left Southampton, the infamous sieges of Lucknow and Kanpur had already taken place, as well as the uprising in Meerut, where the entire European population had been slaughtered. Luckily, Walter sailed into the one port where there was little or no disturbance – Calcutta. He arrived on the 30th of August and was soon assigned to Her Majesty’s 42nd Regiment of Foot, also known as the ‘Black Watch’.

The 42nd was soon called to the relief of Lucknow and other important engagements. In the chaos of the Revolt, Walter obtained rapid promotions. He had come to India as an ensign but by the age of 18, he had been made a lieutenant. For his role in the relief of Lucknow, he got the “mutiny medal with clasp” and several cash prizes. A year later, Dickens was writing to the mother of another Indian cadet that Walter had been “invalided” some time ago, and had to be carried in a litter “God knows how far and how long”, but that his health had begun to recover as soon as he had arrived at a hill station.

But by the age of 19, Walter was piling up debts, probably from gambling.

In October 1861, elder brother Charley spent a week with Walter and paid all his debts, but Walter had accumulated more very soon. Dickens sent him £100 some time later, but very soon he was writing letters to his friends saying that his son had disappointed him and must now learn to live within his means.

Walter wrote home soon after, saying that he would not write to his family until he was out of debt. However in a letter to Mary, Dickens’s eldest daughter a year later, he explained that his health had deteriorated and that he was being sent home on sick leave.

On the 27th of December 1863, Walter arrived in Calcutta and was sent to the Officers’ Hospital. Four days later, at around 5:45 in the evening, he was talking to other patients about his arrangements for coming home, when he suddenly started coughing violently, spat some blood and dropped dead, all in a matter of minutes. He was just over a month shy of his 23rd birthday. It was later discovered that Walter had “an extensive and perfectly incurable aneurism of the aorta, which had burst”. Dickens would receive the telegram about his son’s death on his birthday, 7th February 1864.

Dickens had not “taken any notice of the event” to his wife, wrote Sir William Hardman, editor of the Morning Post. But he had an odd premonition of his son’s death. He wrote to Burdett-Coutts that on the 31st of December 1863, as his son was dying in Calcutta, he was “acting charades with all the children” when he noticed that the shadow his costume was casting looked like “the dismal things that are carried at funerals”. Dickens cut away a portion of the cloth to remove the likeness, but when he went to bed, he noticed that it was in his bedroom and still looked very much the same. Dickens recalled that he had been at Thackeray’s funeral, looking at a very similar object.

At the time of his death, Walter’s personal possessions were pitifully little, consisting only of “a small trunk, changes of linen, some prayer books and a photograph of a woman”. A few months after his death, his commanding officer forwarded a number of his unpaid bills to his father, along with a letter explaining that in spite of his pecuniary difficulties, he had always remained a favourite with his unit. Among the bills was a petition from a certain “Gunga Rum Cloth”, stating that Walter owed them fourteen rupees and eight annas.

Walter Landor Dickens was buried in the Bhowanipore Cemetery, a military cemetery. An article published in the New York Times on 18th February, 1911, explains how the grave was discovered, near the entrance to the cemetery, embedded in masonry and covered in grass. In 1987, a group of students from Jadavpur University put together funds to have the decaying tombstone removed and placed in South Park Street Cemetery. While this guaranteed better upkeep of the tombstone, it also left the grave unmarked.

Walter’s tombstone may now be seen in South Park Street Cemetery, where it lies between the graves of Charlotte Hickey and Major General John Garstin. One can barely make out the words “In loving memory of Lieutenant Walter Landor Dickens, second son of Charles Dickens”. A smaller plaque contains details of the removal of the tombstone.

On the website findagrave.com, there is a curious little note about Walter’s grave. A British couple, Shelagh McKay Jones and Henrietta Rutherford-Jones, came to Calcutta in 1991, looking for Walter’s grave and claim to have found the unmarked burial spot. “We went in search of the unmarked grave in Bhowanipore Cemetery and we arranged for a small stone to be made. When it was ready, we took the stone to Bhowanipore Cemetery, where we laid it on Walter's grave and held a short service in his memory”.

To his illustrious father, Walter may have been a disappointment, but Walter knew exactly who his father was. When filling out the paperwork for joining the East India Company, in answer to the question, ‘What is the profession, situation and residence of your parents or nearest of kin?’, he simply wrote, “My father Charles Dickens Esq, Tavistock House”. Walter knew that his father needed no greater introduction. 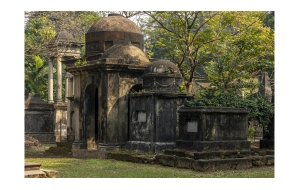 British Kolkata cemetery Charles Dickens
You May Also Like
Amazing India
The Story of Danteshwari Temple, Chhatisgarh
By Akshay Chavan
Dantewada in Chhatisgarh is home to the sacred Danteshwari temple, considered to be one of the 52 Shakti Peethas.
Amazing India
Tamil Nadu’s Olakaneswar: A Pallava Temple or Lighthouse?
By LHI Team
Built by Pallava kings in 600 CE, Olakaneswar lighthouse truly stands out. It was even used by the British!
Amazing India
Bhimakali Temple: Jewel of the Himalayas
By Shabbir Khambaty
This temple complex is also one of the shakti peethas in the country
Amazing India
Grand Palaces of India - Markers of an Era
By Anshika Jain
Join us on a journey through some of the grandest palaces in India.
Support
Support
Each day, Live History India brings you stories and films that not only chronicle India’s history and heritage for you, but also help create a digital archive of the 'Stories that make India' for future generations.