The engraved gate in the town|Author

Among the ruins are also broken parts of huge pillars covered with flowers and cosmic figures; a six-headed Bhairava; a four-headed Shiva; and statues of the Sun, Ganesha and Vidyadhara, the latter celestial beings who are believed to possess great wisdom.

The area is quiet and secluded, accentuating its air of mystery and the enigma that continues to surround this archaeological treasure. No one knows for sure who built this massive temple complex, which was properly uncovered as recently as the 1970s. Excavations at the site reveal the ruins of at least 24 temples, large and small, all of which were covered in dense foliage for centuries.

Located in Baihata Chariali, about 40 km from Guwahati, the Madan Kamdev temple complex marks a silent but vibrant period in Assam’s ancient history. Historians like Dr Pradeep Sharma, Assistant Director of the Directorate of Archaeology, Assam, date the temple complex to the reign of the Palas of Assam, between the 10th and 12th centuries CE. While the Palas of Bengal are well known, the Palas of Kamarupa (as Assam was then known) are one of the many ancient and medieval dynasties of North East India about whom we know little.

Noted Assamese historian K L Barua, in his book Early History of Assam, has written extensively about this little-known dynasty. Apparently, the Kingdom of Kamarupa, once the empire of the great ruler Bhaskarvarman, fell to the Mlechha dynasty between 655 CE and 900 CE. The last ruler of this dynasty was Tyaga Sinha (890-900 CE), who died without an heir. The nobles, fearing anarchy in the kingdom, elected an adventurer named Brahmapala (r. 900-920 CE) as their ruler and thus established the rule of the Palas of Kamarupa.

While the Palas of Bengal patronized Buddhist establishments, the Palas of Kamarupa were patrons of Hinduism. From their capital, Pragjyotishpur (modern-day Guwahati), they presided over a prosperous kingdom, rich in trade and commerce, and Pandit Vidyavinod, a court poet of King Ratnapala (r. 920-960 CE), wrote about how the king ‘delights in making his copper mines lucrative’.

Kamdev or Madan is the Hindu God of Love, and according to folklore, he had incurred the wrath of Lord Shiva for disturbing his tapas and was turned to ashes. But on the advice of his wife Parvati, Lord Shiva restored Kamdev to his original form. The site where Kamdev regained his original form came to be known as ‘Kamarupa’ (in Assamese). Kamdev reunited with his wife Rati, on a hillock, where he built a temple to Lord Shiva. It is this very temple that we know today as ‘Madan Kamdev’.

Incidentally, the ancient name of Assam, ‘Kamarupa’ is derived from ‘Kamdev’, and is the ‘land where the God of Love regained his original ‘form’ or ‘rupa’. It was with the advent of the Ahoms into the Brahmaputra valley in the 13th century, that the region came to be known as ‘Assam’ , after the word ‘Asama’ or ‘Invincible’ as its rulers were known. The Ahoms ruled the region right till the advent of the British in the 19th century.

Over the centuries, the Madan Kamdev temple complex was swallowed by thick forests and fell to ruin. Although no one knows when or how they fell apart, these temples were probably destroyed by one of the numerous earthquakes in this seismic-prone region. While locals have always been aware of these ruins, they came to the notice of the world at large only in the late 19th century.

With the advent of the British in Assam in 1826, large number of British army officers were posted across the valley to conduct surveys. The earliest reference to the Madan Kamdev remains is by one such British army officer, Captain Edward Tuite Dalton,an administrator with the East India Company, who had been posted in Assam in 1855, . Dalton had mentioned these ruins not far from the Silsako bridge, a historical stone bridge which collapsed during the earthquake of 1897. The site was near Changsari, 26 km from Guwahati.

But the temples remained in obscurity till 1943, when the archaeological significance of the region was published in the Journal of the Assam Research Society (Vol. X. 384) by Tarini Kanta Sarma, an Assamese educator with an interest in history. In his second article, in 1949, in the same journal (Vol. XII. 1& 2), Sarma once again tried to highlight the historical importance of this area and mentioned several sites with archaeological remains here.

But the archaeological world paid no attention and the Madan Kamdev temple complex was forgotten, once again, till 1976. In the intervening decades, the site was raided by thieves who sold the sculptures on the black market. Numerous sculptures were also taken away by local villagers, who installed them in their namghars and manikuts (religious sanctums in their homes). This unchecked pilferage led to the loss of many important artifacts that could have told us plenty about the site.

Finally, in 1977, the Directorate of Archaeology, Assam, recognized the significance of the Madan Kamdev temple complex and, under its care, scores of sculptures and structural components of the temple were unearthed. Among these were the upper part of the outer wall and the shikhara of the temple. The sculptures they found consisted of Surya, Ganas and Vidyadhara, in addition to niches and pillars decorated with statues of men, women and animals, and moulded blocks.

Probably the most striking artifacts unearthed were three monolithic models of temples of the North Indian Nagra style. Roughly 1 mt tall and known as angashikhara, these models had been used to decorate the base line of the temple’s dome. Archaeologists determined that the other objects salvaged from the site too belonged to the Madan Kamdev temple complex and that the way in which the ruins lay scattered suggested that the temples had been destroyed by an earthquake.

Soon, it became clear that the site was much larger than they had imagined and that there was possibly a staggering number of remains still buried. The excavation was thus suspended so that a comprehensive scheme for a full assessment could be chalked out. Besides, the thick jungle around the site had to be cleared before any survey could be undertaken.

Accordingly, in 1981-82, the site was reopened for further study, and it was discovered that the 500-mt ridge of the Madan Kamdev hill alone was dotted with the ruins of more than two dozen temples. The team found that the two nearby hills of Jalpeswar and Narasingha also contained ruins in both brick and stone.

In 1982-83, the area east of Madan Kamdev was cleared of thick forest, and the algae formation and the debris from various stone structures was cleaned. This revealed stone plinths of two rows of temples. Mysteriously, there was no trace of their superstructure, except for two lintels of excellent carvings and two door-sills with ‘Kalpavriksha’ (tree of plenty) sculpted on them. As the entire area was cleared and scoured, the dominance of Saivite sculptures proved that it was a centre of worship of Lord Shiva. The erotic assortment of sculptures found here included both celestial beings as well as various animals.

Madan Kamdev is a fascinating open-air museum. In many places, the temple ruins are neatly stacked with a paved walkway to help visitors explore and examine the carvings and architectural details but the majority of the ruins are strewn across the site. There is also a museum that displays artifacts uncovered from the hillside.

Historians are no closer to conclusively proving who built the Madan Kamdev temple complex and why it was constructed. But it is worth visiting the site to get a feel of one of the mysteries of North East India. 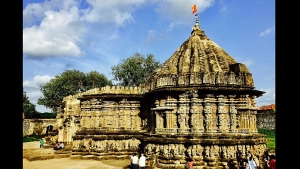