Jodhpur, the erstwhile capital of Marwar, is known for the grand and imposing Mehrangarh Fort and the opulent and magnificent Umaid Bhavan Palace. But few realise that on the outskirts of the city of Jodhpur is Mandore, the first capital of the state of Marwar and home to some exquisite monuments going back centuries.

The region of Marwar gained prominence during the medieval period when the Rathore kingdom of Marwar was established, so it might surprise you to learn that the region’s history goes back to the Gupta period.

The town of Mandore, which is believed to have existed since the Gupta period, is said to be named after ‘Mandavya’, a Hindu sage.

It was known as Maddodara, Mandowar and Mandavyapura-Durga in ancient times. Archaeological excavations in and around Mandore have revealed Gupta-era remains, including 4th century CE inscriptions as well as a monolith representing scenes from Krishna Lila dating to the 5th century CE.

The Mandore Pratiharas, a branch of the Gurjar Pratiharas, established a small kingdom here in the 6th century CE. Their ruler, Rajilla, built the ramparts of what would become the Junagadh Fort. They also built some exceptional Hindu and Jain temples here. The Pratiharas went into decline and Mandore began to face the brunt of attacks from Delhi and was in fact occupied by the Khiljis from 1292 to 1395 CE.

The Pratiharas thereafter decided to join hands with the upcoming Rathores to safeguard themselves.

They forged a marriage alliance, whereby a Mandore Pratihara princess was given away in marriage to Rao Chunda, one of the Rathore rulers in 1395, thus bringing Mandore under Rathore control. The groom also received Junagadh Fort as part of the dowry. Mandore became the capital of the Marwar Rathores until the city of Jodhpur was established by Rao Jodha in 1459.

An aerial view of Mandore|LHI

Mandore had been captured multiple times by other states including the Delhi Sultanate, and due to this, it was decided that the capital be shifted to a more secure location. A hilly outcrop 9 km away was chosen on which the imposing Mehrangarh Fort was built by Rao Jodha and his successors. This was the nucleus of the town of Jodhpur.

Over time, most residents of Mandore migrated and resettled in Jodhpur. The old ‘Junagadh’ was slowly abandoned.

Some walls of the ancient Junagadh Fort still stand at the top of a small hill. Although most of it has been lost to the ravages of time, its size may be gauged by the few walls that still stand. Today, the Mandore Fort and its surroundings fall under the purview of the Archaeological Survey of India.

Although Mandore was the capital of the Rathores for a relatively short period, it remained an important spiritual centre long after. It has many significant Hindu temples that are still standing but it is most known for its Royal Cenotaphs.

The cenotaphs, also called devals or chhatris (umbrellas), are memorials built to deceased kings in the style of Hindu temples. The first deval was commissioned by Rao Udai Singh in memory of his father, Rao Maldev, in 1583 CE, long after the capital had shifted from here.

These devals follow the Naggar or North Indian Temple architecture, more specifically, Pratihara temple architecture, with a shekhari-type shikhar built in the local buff-coloured sandstone. Here, one can see the chhatris of most of the Rathore kings as well as their wives till the 19th century. The area of the cenotaphs is popularly known as the ‘Mandore Gardens’ and one can see many locals here any given time, both human and simian!

The carved ceiling of one of the chatris|LHI

Another interesting fact about Mandore is that it is associated with Mandodari, Raavan’s wife, and is regarded as Raavan’s sasuraal (in-laws’ home) In fact, there is a temple dedicated to Raavan and he is treated as the ‘son-in-law’ by some local communities.

Mandore isn’t the only place that has royal cenotaphs of the Jodhpur Marwars. Close to Mehrangarh Fort, in the centre of Jodhpur, is the Jaswant Thada, whose imposing marble edifice has the memorials of rulers from Jaswant Singh (1838-1895) onwards.

What is distinct about Jaswant Thada is that it has an edifice completely clad in marble. In Jodhpur, where the predominant construction material is the local sandstone, either red or dun-coloured, the stark white Jaswant Thada is very conspicuous.

In fact, it has also been called the ‘Taj of Marwar’.

According to one legend, Jaswant Singh had healing powers, due to which people started worshipping him and his cenotaph was thus built closer to the town and Mehrangarh Fort. According to another legend, Jaswant Singh spent most of his life away from Mehrangarh and wanted his cenotaph to be built close to it and thus Jaswant Thada was built. Regardless of the reason, the elaborate and distinct facade of this monument is beautiful.

These two collections of cenotaphs are studies in contrast due to their materials and architectural styles but, together, they tell us the story of the impressive ancestors of the Rathores of Marwar and are well worth a visit. 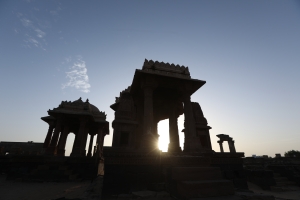 Rajasthan Jodhpur Marwar Mandore Rathore Pratihara
You May Also Like
Photo Essays
Sirpur: Chhattisgarh’s Medieval Secret
By Kritika Sarda
The story of the spectacular capital of Dakshin Kosala, its towering ruins and confluence of three faiths
Amazing India
Mahabaleshwar: More Than Strawberries
By Aditi Shah
A historic hill station is Maharashtra today serves as a weekend spot as well as a pilgrimage centre
Amazing India
Mysuru Palace: Raising a Royal Residence
By Aditi Shah
The twists and turns in the tale of this palace as it mirrors the fascinating story of the Wadiyars
Snapshort Histories
Kurumbera: The Fort That Never Was
By Deepanjan Ghosh
In a remote part of West Bengal is an oddity of history. Was it a temple, a mosque or is it a fort?
Support
Support
Each day, Live History India brings you stories and films that not only chronicle India’s history and heritage for you, but also help create a digital archive of the 'Stories that make India' for future generations.