Somewhere between history, myth and legend, the Pallavas emerge as a force to reckon with in the 3rd century CE. Over the next 600 years, they set the stage for a great cultural outpouring and building spree that forged the template for much of the South.

Their kingdom, referred to as Tondaimandalam, stretched from southern Andhra Pradesh and northern Tamil Nadu – the fertile plains between the river basins of the Penna and Ponnaiyar rivers. Kanchipuram was the capital of their empire and the port city of Mamallapuram the source of all their wealth.

Kanchipuram, known in Hindu theology as a moksha sthala, was an important city through history. It traces its origins to the 3rd century BCE. The great sage Patanjali, who lived in the 3rd-2nd century BCE, mentions Kanchipuram in his works. Early Tamil literature, Perumpanarruppatai, written in the 2nd century CE, mentions Kacci, the Prakrit name for Kanchipuram. The work details that “different groups of people existed in Kanchipuram: Brahmins, fishermen, traders, toddy drawers, weavers and so on.”

During the rule of the Imperial Pallavas, the Brahmins served as priests, ministers, accountants and committee members of local and central assemblies. The Chinese traveller, Hiuen Tsang, who visited Kanchipuram in the 7th century, described it as, “...a fertile, rich and hot country with hundreds of monasteries and 10,000 bhikkhus, competing with 80 deva temples and numerous Jains.”

The Pallavas were great administrators. The Hirahadagalli (Bellary District) copper plate inscription issued at Kanchipuram and dated to the 8th regnal year of Sivaskanda Varman (283CE), describes the Pallava administration system thus: “...the king at the top and provincial governors and several departmental ministers in charge of parks, public baths and forests.”

The Pallavas of Kanchi were renowned for their just rule and for their contributions to art, architecture and literature. All religions flourished at Kanchi and the city was the seat of learning. Scholars like Dandin (7th-8th century CE), writer and poet in the Pallava court, and saints like Ramanuja (Vaishnava saint, 1017-1137 CE) and Appar (Shaiva saint, mid-7th century CE) received patronage from the Pallava rulers. The seeds of the Bhakti movement were sown in Kanchipuram.

Under Pallava rule, cotton cloth was exported to China, Babylonia and Egypt. Apart from cotton, spices, precious stones and medicinal plants were sent to Java, Sumatra, Cambodia, Sri Lanka, China and Burma. Merchants from surrounding regions came to Kanchipuram to trade – they had to seek a license to trade, and the merchants created organizations called Manigramam. The ports included Mamallapuram, Vasavasamudrum and Mylapore.

The Pallavas ruled from Kanchipuram and built Mamallapuram into a ‘paradise city’ in the 7th century CE, under the rule of Narasimhavarman I (630-688 CE), also known as ‘Mamalla’. This was to be a city for trade, from where diplomatic missions headed out to Sri Lanka and South-East Asia.

According to the Brahmanda Purana (c. 4the century BCE), “Mallavaram ...is populated with virtuous men, full of riches, and is not inferior to the heaven of Indra in its comforts, and that it is two yojanas [ancient Indian measure of distance, about 12-15 km] in length and half a yojana in breadth. The population consists of Srivaishnava Brahmans versed in the sastras…heroic warriors fully equipped with chaturangabala and righteous men and members of the royal family who are all devoted followers of Vishnu. It is a seaport where precious articles are imported for sale from other sea-coast towns.” The port of Mamallapuram was a centre of trade from the 1st century CE until the British period.

Known in poetry as ‘Kadal Mallai’ or ‘Sea Mountain’, an 8th-century poet, Thirumangai Alvar, thus described the port: “Where the ships rode at anchor bent to the point of breaking laden as they were with wealth, big trunked elephants and gems of nine varieties in heaps.” Epigraphic records also mention that Pallava rulers had trade and diplomatic contacts with Sri Lanka, China and South-East Asia. King Simhavarman is said to have led two expeditions by embarking on ships from Mamallapuram. 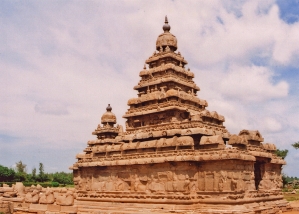 Mamallapuram or Mahabalipuram, was also known as ‘Seven Pagodas’ ( a reference to the shore temples of the city) in ancient times, finds mention in the records at Fort St George in 1708. There is mention of a letter sent to the Super Gargoe or Commander of the English ship riding near the ‘Seven Pagodas’. Another entry of 1721 records a letter from the Chief of the Flemmings at Covelong advising that an English ship was stranded at Mauvalipuram.

The Pallava dynasty reached its pinnacle under Mahendravarman I (571-630 CE) and Narasimhavarman I (630-688 CE), and art, architecture, trade and learning flourished. Temple building under the Pallavas had two phases – the rock-cut phase and the structural phase. The Pallavas laid the foundation of the great temple architecture in South India.

Cave temples built under Mahendravarman had pillared halls excavated out of mountain slopes and followed largely Jain architectural plans of those times. The cave temples at Mandagapattu (Villupuram district), Pallavaram (a suburb of Chennai) and Mamandur (a village 15 km from Kanchipuram) are prime examples.

It was during the rule of Mamalla or Narasimhavarman I that the monolithic shrines, the rathas of Mamallapuram, were sculpted in the 7th century CE – the Pancha Rathas and Arjuna’s Penance. Named after Draupadi and the Pandava brothers, the rathas are monoliths that were never completed. The rathas have a hut-like roof with carved ridges, and elephants and lions are carved on the plinth as also door guardians. Images of Durga, Shiva and Vishnu and their pantheons found in the Pancha Rathas were brought to life by the sculptors of Mamallapuram.

The sculptors and planners of the friezes and stone and stucco sculptures of Mamallapuram were experts in proportion. They brought images to life—animals like elephants and monkeys, goddesses, guardian deities, Shiva and Vishnu. They were well-versed in the iconographies of various pantheons as well as legends and epics. The sculptors were able to create life-like images – the largest rock-relief is that of Arjuna’s Penance (mid-7th century), also called ‘Descent of Ganga’.

Scholars believe this is one of the finest sculptural compositions of the period. Two large boulders are covered with a profusion of flying, celestials being as well as elephants and other animals. All the figures seem to move towards the cleft between the two boulders. The cleft features a naga and nagin (snakes), their hands folded in obeisance. Water, it is believed, used to flow down the cleft many years ago. On the left is Arjuna standing on one foot deeply engaged in penance and to the right is Shiva holding in his hand the weapon Arjuna is praying for.

Maria Graham (1785-1842 CE), a British travel writer in her work Journal Of A Residence in India (1813), captures the essence of the panel: “The face of the large rock is carved into above a hundred figures of men and animals, mostly of the natural size …representing the Tapas of Arjoon, or sacred austerities practiced by that hero, in order to obtain …a celestial weapon which was to give him power over all his enemies…”

Under Pallava rule, temple architecture moved from cave temples and wooden architectural patterns to free-standing shrines built with stone and mortar. During Rajasimha’s reign (c. 700-728 CE), the Shore Temples at Mahabalipuram and the Kanchi Kailasanathar Temple were built. These are the first structural temples extant and have an unsurpassed elegance, with lion pilasters, sculptured niches and elegantly proportioned towers.

Nandivarman II (c.732-796) built many monuments, the finest being that of the Vaikunta Perumal Temple at Kanchipuram.

Legends and European travellers’ accounts speak of ‘Seven Pagodas’, or the seven shore temples at Mahabalipuram. There is only one Shore Temple at Mahabalipuram today, dating to the early 8th century. It has three shrines housing an image of Vishnu sleeping on Ananta, the snake, a multi-faceted basalt Lingam, and another shrine to Shiva. It is believed that, over time, except for the one standing, the other six temples were submerged by the sea.

D R Fyson, an Englishman who stayed in Madras, in his work of 1931, Mahabali Purana or Seven Pagodas writes, “Tradition asserts that the Shore Temple is the only survivor of the Seven Pagodas, which once graced a beautiful city. It is said that the summits of the other pagodas may be seen, on occasion, glittering beneath the waves. Legend has it that the king, through the favor of a nymph, visited the courts of Indra in heaven, and on his return vowed to make his city even more resplendent. This aroused the jealousy of Indra, who descended with a great storm and caused the ocean to rise and overwhelm the city.”

Scholars believe that a tsunami in the 13th century swallowed parts of Mamallapuram. What was once conjecture became reality, when the 2004 tsunami struck the east coast of India, and a retreating sea revealed the presence of structural temples. These underwater structures are now being studied.

Pallava architecture formed the basis of temple architecture in Tamil Nadu and the great temples, like Brihadeeswara (built by Raja Raja Chola between 1003 and 1010 CE) at Tanjore, as well as others, were based on Pallava models.

Pallava rule declined when the Chalukyan army of Vikramaditya II (733-745 CE) invaded Kanchi during the rule of Nandivarman II. Aparajitavarman was the last Pallava king and he lost his throne in the 9th century to the Cholas. Vikramaditya’s queen, Lok Mahadevi, is said to have been inspired by the Kailasanathar Temple at Kanchi and brought sculptors from Kanchipuram to build the Lokeswara or Virupaksha Temple at Pattadakal. Subsequently, artisans from Pattadakal went to Ellora to build the Kailasanatha Temple there.

Hundreds of thousands of tourists flock to Kanchipuram and Mamallapuram every year, to visit the famous temples and marvel at their architectural wonders. It is where the legacy of the great Pallavas, whose artistic, architectural and cultural achievements are set in stone.

Sudha Seshadri is an editor and writer who is passionate about India, it’s art and culture. She studies the country’s multi-faceted culture and traditions.

temple Tamil Nadu Architecture art
You May Also Like
Cover Story
Sri Harmandir Sahib: A History of Struggle & Devotion
By Aashish Kochhar
The story of how the temple was lost, destroyed and rebuilt
Amazing India
Elephanta Caves: Celebrating Shiva
By Aditi Shah
The story of these caves, and the mysteries and legends that cast a spell on all who visit them
History Daily
Iron Pillar of Delhi: Solving the Mystery
By Kurush Dalal
Who built it and why is it a misfit in the complex? Catch the story of this rather modest but remarkable monument.
'History of India' Series
The Kushanas: India and Beyond (60 CE - 230 CE)
By Akshay Chavan
Catch the story of how they ruled, expanded, dominated the Silk Route and even altered the course of Buddhism
Support
Support
Each day, Live History India brings you stories and films that not only chronicle India’s history and heritage for you, but also help create a digital archive of the 'Stories that make India' for future generations.