He lived by the sword and died by the sword but Tipu Sultan’s beloved Srirangapatna was felled by an enemy far more dangerous than the British forces that slayed the ‘Tiger of Mysore’. Before we get there, here’s a brief look at Srirangapatna, the then capital city of the Mysore kingdom.

Believe it or not but Srirangapatna was one of India’s foremost metropolises in the 17th and 18th centuries, until the morning of May 4, 1799. On this fateful day, British forces besieged the island and killed Tipu Sultan inside its fort, in the Fourth Anglo-Mysore War.

But the death of Tipu also spelt the end of his capital city – but we’ll get to that later.

In the late 1700s, few cities in this part of the world attracted the kind of attention and envy that Srirangapatna did. Many contemporary accounts lavish praise on the capital city developed by Hyder Ali and then his son Tipu Sultan, with Captain Alexander Dirom, in 1792, describing it as “the richest, most convenient and beautiful spot possessed in the present age by any native prince in India”.

Francis Buchanan, a Scottish surveyor who visited the island in 1800, just after the fall of Tipu Sultan, estimated that, at its peak, the city had a population of over 1,50,000, making it one of the largest cities in the world in the 18th century.

‘A view of the island-fort of Seringapatam’, an etching published by D Orme, c. 1792|British Library

Srirangapatna is an island city surrounded by the sacred Kaveri River. Located 18.5 km from Mysore, this island is 13 sq km in area. While the fort occupied the upper end of the island, the industrial suburbs of Ganjam and Lalbagh, and Tipu’s pleasure garden occupied the rest of the island.

The fort thus situated on the west end of the island is distinguished by its white walls, regular outworks, magnificent buildings and ancient Hindu pagodas, contrasted with the more lofty and splendid monuments lately raised in honour of the Mahomedan faith.

The town’s principal identity is derived from this ancient temple that was originally built in 984 CE by a Ganga chieftain and was later expanded by the Hoysalas, the Vijayanagara rulers and Mysore Wodeyars. It is perhaps due to this layered and multifaceted history of the place that British chronicler Rev E W Thompson wrote in 1924 that “Seringapatam has a history which only the labour of years can unravel”. The place continues to be an important pilgrimage site today.

The suburb of Ganjam (from Persian “Ganj–i–am”, meaning ‘granary of world’), was founded by Tipu Sultan as an ambitious industrial settlement. He settled it with artisans and traders from the Northern Carnatic and Mughal province of Sira.

The most prominent remnant of those times in Ganjam is the Darya Daulat Bagh, the summer palace and adjoining garden that was purportedly ‘Tippoo's favourite retreat’. Francis Buchanan was struck by the murals inside the palace and said, “Its walls are covered with paintings which represent the two Mussulman princes, Hyder and Tippoo, in public processions, the defeat of Colonel Bailie, the costumes of various castes or professions that are common in Mysore.” It is one of the most-visited monuments on the island by tourists today.

Lord Dalhousie was so moved by the murals on the walls of the Dariya Daulat Palace that he initiated one of India’s first heritage conservation projects in 1855. His note read, “I trust that the building with all its memories and associations may long be preserved for the contemplation and reverence...”

Despite the beauty and history of Srirangapatna, Tipu’s beloved capital city was eventually abandoned. The reason, incredibly, were relentless attacks by mosquitoes that were thriving in the marshes nearby. This led to frequent outbreaks of cholera and malaria, which forced the English to leave the island city. In 1806, English forces left their posts in Srirangapatna and moved to the far more pleasant Bangalore, where a new cantonment was set up that year. 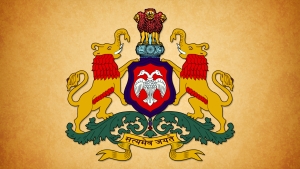 Tracing the Flight of Karnataka’s Eagle

Srirangapatna gradually fell off the map, and, even today, this historic island has barely 20,000 people living on it. The only memories we have of Tipu’s capital are colonial accounts from eyewitnesses like Buchanan, who offer a glimpse into the city as it was during its zenith.

Sashi Sivramkrishna is Director at the Foundation to Aid Industrial Recovery (FAIR), Bengaluru.
Lingaraj G Jayaprakash is a researcher at FAIR and at the Sustainable Futures Laboratory, McGill University, Canada.

Mysore Karnataka Tipu Sultan Srirangapatnam
You May Also Like
Amazing India
Shettihalli Church: India’s Only ‘Floating Church’ in Karnataka
By Deepanjan Ghosh
Rising from a river in a village in Karnataka are the haunting remains of India’s only ‘floating church’.
Amazing India
Bandhavgarh Fort: Of Tigers & Kings
By Nehal Rajvanshi
Did you know that a 2,000-year-old fort inside the Bandhavgarh National Park was the seat of many royal dynasties?
Amazing India
Hetampur: A Tiny Royal Gem
By Sk. Abdul Amin
Find out why this royal abode and other relics of the Hetampur Raj are marooned in a village in Birbhum district
Amazing India
Najafgarh: A Kingmaker in the Capital
By Barun Ghosh
Najaf Khan, a Persian military adventurer restored a Mughal Emperor to the throne and reclaimed the Mughal Empire
Support
Support
Each day, Live History India brings you stories and films that not only chronicle India’s history and heritage for you, but also help create a digital archive of the 'Stories that make India' for future generations.