In the Thoothukudi district of Tamil Nadu lies the small village of Korkai. Though largely off the radar today, this was one of the oldest port towns of the Tamil region, going back more than 2000 years. It was also the early capital of the Pandyas. But what made Korkai really famous through history was the fact that it was one of the greatest centres of pearl fishing in the ancient world.

With a coastline of more than 7000 km, the ports like Korkai in peninsular India played an important role connecting the Subcontinent’s hinterland with global market places and acting as a conduit in the trans-oceanic trade between the East and the West.

The 1st century CE Greco-Roman text Periplus of the Erythraean Sea refers to Korkai as Colchis and Ptolemy, an Egyptian geographer calls it Kolkhai. Multiple classical works of the Sangam literature like Akananuru (1st century BCE) and Kalithogai by the Tamil scholar Nachinarkiniyar speak of this port city’s reputation.

But what makes Korkai significant in history is that it was the birthplace of the mighty Pandya dynasty, one of the three Tamil dynasties. Legend goes, there were three brothers - Cheran, Cholan and Pandyan who ruled together at Korkai. While Pandyan is said to have remained at home, the other two moved out and founded their own kingdoms.

Jainism, Shaivism as well as Vaishnavism flourished during their reign.

The Early Pandyas ruled from the 4th century BCE and the reference to Pandaie by the Greek ambassador Megasthenes (c. 350 – c. 290 BCE) is believed to have been this dynasty. Jainism, Shaivism as well as Vaishnavism flourished during their reign and the rulers were known for their patronage to some of southern India’s most magnificent temples and literature. In the Sangam period poetic work Maduraikkanci by Mankudi Maruthanaar (100 BCE – 100 CE), the author refers to his patron, King Nedunchezhiyan, as the lord of Korkai.

The Early Pandyas, along with the early Cholas and Cheras were displaced and pushed into obscurity by the Kalabhra dynasty around the 3rd century CE and they came to prominence again only in the 6th century CE under a ruler named Kadungon. This time, they set up their capital in Madurai and constructed temples like the Meenakshi Amman Temple and Nellaiappar Temple.

The Later Pandyas were known for their rock-cut architecture as can be seen in the Vettuvan Koil (cover photo) in the Thoothukudi district, not very far from Korkai.

It was during the time of the Early Pandyas that the port of Korkai was inhabited by fishing communities and the pearl trade was at its peak. It was one of the most expensive products to be imported from India by the Roman Empire besides muslin. The Periplus mentions that ‘pearls inferior to the Indian sort are exported in great quantity from the marts of Apologas and Omana.’ The glory of Korkai was such that the entire Gulf of Mannar was referred to as the Colchic Gulf. Arab traders from Egypt and Yemen landed at the port of Korkai and it also had strong trading connections with Sri Lanka.

The discovery of Korkai itself has an interesting story. With so many literary references to this port of such obvious eminence, various attempts were made by scholars to try and locate this port city, in the 19th century. The correct identification only came in 1838 when an anonymous contributor to the Madras Literary Journal brought to light the existence of a pearl fishery about 3 km north of the Thamirabarani River and about 6 km from the shore of Bay of Bengal. This port, which must have been on the coast in its heydays, had shifted inland due to sedimentation over time.

Soon, excavations were carried out in the region. In 1968-69, the state department of archaeology unearthed artefacts dating to as early as 785 CE  from the site of Korkai. Also found were ruins of conch-shell cutting factories and centres for splitting open pearl oysters.

Pottery discovered from the site of Korkai|tnarch.gov.in

More significantly, the finds of black and red pottery ware with old Tamil Brahmi scripts, apart from drawn graffiti of the sun, fish, bow and arrow, have been dated to a period between 3rd century BCE and 2nd century CE. But the most interesting find was that of megalithic burial urns similar to that of Adichanallur, the massive burial site of ancient India from where around 169 clay urns containing human skeletons dating back at least 3,800 years were discovered in 2005. Adichanallur is at a distance of only 15 km from Korkai. This indicates that the entire region was fairly well-populated during megalithic times. 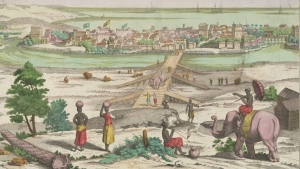 However, like every other grand port, Korkai too saw its decline and it happened in the 5th century CE. This can, in a way, be linked to the shifting of the Pandyan capital to Madurai and then the emergence of the new port of Kayalpatnam, today about 15 km from Korkai, where Marco Polo landed in the 13th century.

Today, this once-famous port which was the gateway to southern India has sunk into oblivion.

Tamil Nadu port trade archaeology Temple Art Pandya dynasty
You May Also Like
Amazing India
Shettihalli Church: India’s Only ‘Floating Church’ in Karnataka
By Deepanjan Ghosh
Rising from a river in a village in Karnataka are the haunting remains of India’s only ‘floating church’.
Amazing India
Bandhavgarh Fort: Of Tigers & Kings
By Nehal Rajvanshi
Did you know that a 2,000-year-old fort inside the Bandhavgarh National Park was the seat of many royal dynasties?
Amazing India
Hetampur: A Tiny Royal Gem
By Sk. Abdul Amin
Find out why this royal abode and other relics of the Hetampur Raj are marooned in a village in Birbhum district
Amazing India
Najafgarh: A Kingmaker in the Capital
By Barun Ghosh
Najaf Khan, a Persian military adventurer restored a Mughal Emperor to the throne and reclaimed the Mughal Empire
Support
Support
Each day, Live History India brings you stories and films that not only chronicle India’s history and heritage for you, but also help create a digital archive of the 'Stories that make India' for future generations.