Lord Krishna, one of the most loved deities of the Hindu faith, has also been a great muse for artists. In fact, it is fair to say that without Krishna and the tales of his childhood, Indian art would have been much poorer.

Almost every significant school of art in India has a liberal dose of young Krishna and his exploits. They range from Chola bronzes and Rajasthani miniatures to Kalighat paintings. On Janmashtami, let’s explore some of these exquisite artworks that make the young Krishna come alive and tell his story.

Vasudev and Krishna|Cleveland Museum of Art

This Kalighat painting from 19th century Calcutta depicts the legend of the birth of Krishna. A seer had predicted that the evil king of Mathura, Kansa, would be destroyed by his sister Devaki’s child. On hearing this, he imprisoned his sister and killed all her children. Or so he thought. Before he committed this brutal act, the infant Krishna had been smuggled across the Yamuna to Vrindavan by his father, Vasudev, where he was raised by the head of the cowherds, Nanda, and his wife Yashoda. Here, we can see Vasudev with Krishna in his arms crossing the Yamuna while a serpent protects them from the rain.

Yashoda and Krishna|Metropolitan Museum of Art

Krishna was adored by his foster mother, Yashoda, and her dedication to him has been regarded as the epitome of maternal love by writers and artists across time. In this exquisite Chola sculpture from the 12th century, we can see the infant Krishna suckling at Yashoda’s breast.

This deep affection between Yashoda and Krishna has also been immortalised by Raja Ravi Varma in his paintings.

Kansa had learnt that Devaki and Vasudev’s child was being raised in Vrindavan and decided to kill him. To achieve this end, Kansa sent various demons to Vrindavan but they failed miserably. The retelling of tales of Krishna vanquishing these demons is a popular theme in Indian art.

The first and most well-known of these demons, Putana, is depicted in this 17th century painting from Bikaner in Rajasthan. Putana had taken the form of a beautiful maiden and tried to poison Krishna with her breast milk. However, Krishna suckled her to death. Here we can see Krishna suckling her to death while Yashoda and others look on in horror. In death, Putana’s demon form is revealed.

In this 19th century Company drawing, one can see infant Krishna being carried away by the demon Trinavarta, who has taken the form of a whirlwind. However, Krishna made himself so heavy that the demon couldn’t bear his weight and collapsed to earth and died.

In this Gupta sculpture from Uttar Pradesh, dated to the 5th century CE, we can see Krishna slaying the horse-demon Keshi. Keshi was a huge horse who moved at the speed of thought and whose neighing terrified people. Here, Krishna can be seen thrusting his left arm into the horse’s mouth. This made Keshi’s teeth fall off. Krishna then expands his arms, which causes Keshi to choke to death.

The demon, Aghasura, the younger brother of Putana, had taken the form of a giant serpent with its mouth open. The cowherds had mistaken his mouth for a mountain cave and entered it with their cattle. In this painting from 17th century Malwa, we see Krishna rescuing them. He is shown twice – first while entering the serpent’s mouth and later rising from the top of the serpent’s head, after vanquishing the demon.

Another significant episode from Krishna’s youth is when the 7-year-old Krishna lifted Mount Govardhan when Vrindavan faced torrential rains and floods. In this 17th century painting from Bundi, we can see Krishna lifting Govardhan on a single finger with people and cattle taking shelter underneath.

This posture is used to depict Krishna in his Srinathji form.

But performing miracles and fighting demons is not all Krishna is up to. After all, he is a child and he spent his time playing with his playmates and indulging his love for butter by sneaking it at every opportunity he got.

Krishna with his Playmates |Cleveland Museum of Art

In this Mysore painting from the 18th century, we see Krishna climbing a ladder to reach the butter while his playmates look on.

He may be a divine being but that doesn’t stop his mother, Yashoda, from rebuking the mischievous Bala Krishna for his antics. In this 19th century Company painting from Tamil Nadu, we see Yashoda scolding the young Krishna while behind him is his brother Balarama with both hands raised in supplication.

Krishna is one of the avatars of Vishnu and a significant deity in the Hindu faith. However, his place in Indian art is unsurpassed, and particularly joyous is the depiction of his capers as Bala Krishna, who may be divine but is still a child. 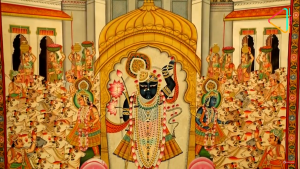