Rabindranath Tagore (1861–1941) is most popularly known as the poetic genius who penned India’s national anthem and for his masterpiece Gitanjali, which won him a Nobel Prize. But Tagore’s brilliance encompassed much, much more, for he is also one of the finest litterateurs, playwrights and composers the country has ever seen.

That is why it might surprise you to learn that the ‘Bard of Bengal’, was also a fine artist. Picking up the brush rather late in life, Tagore went on to become a prolific painter and took his works to exhibitions across the world.

His art was so outstanding that he is counted among the nine greats, or the Navratnas of Indian art.

In a path that is quite unusual, Tagore began painting at the age of 63. In fact, he himself called his art an “affair in the old age”. Interestingly, his art had its roots in his writing.

A page from his manuscripts|Wikimedia Commons

Tagore started with little lines that he used to make in the margins of his manuscripts. These, in time, evolved into doodles. And, in the last 17 years of his life, he created more than 2,500 artworks. While the majority of them can be found in India, at the National Gallery of Modern Art in Delhi and at the Visva Bharati University in Santiniketan, many are owned by private collectors and museums overseas.

In the first phase of his artistic journey, Tagore created animals or fantastical creatures. These were often creatures that he created more by instinct and were products of his imagination.

Interestingly, Tagore had his own poetic take on it, referring to one of his creations as “a probable animal that had unaccountably missed its chance of existence” or “a bird that only can soar in our dreams”. To say that Tagore was an observer of the world around him would be an understatement.

It is these observations, and his own flights of fancy, that shaped much of his art.

View from a balcony|Victoria & Albert Museum

The next phase in Tagore’s artistic journey involved the creation of landscapes. Although inspired by his observation of nature, he also dipped into his own childhood and the time he had spent at the family’s verdant farms.

His paintings show radiant skies with the world around bathed in evening light. These paintings were the most vivid of his works.

Unlike other artists of this time, Tagore chose paper, not canvas, as his medium. Neither did he make preparatory drawings. His art flew directly from his mind to his brushes and onto paper. His work evolved over time and he moved from fantastical figures to elaborate landscapes.

However, landscapes didn’t hold his attention for long and Tagore soon started depicting people in his art. He started with dramatic scenes with multiple figures, and scholars believe that this was influenced by his background in theatre. He was not only a notable playwright but also an actor and a director, having written and been involved in the production of many plays like Valmiki Pratibha, Chandalika and Dak Ghar.

Moreover, the figures in these paintings mirror the rhythm and vitality of the medium of theatre. They have a dramatic quality with animated gestures while maintaining a degree of solemnity.

Surprisingly, for a man of prose, Tagore preferred not to title his works.

His decision to leave them open-ended added to the enigma and mystique of his art. As Raman Siva Kumar, art historian and an authority on Tagore’s art says, this was also an attempt by him to make viewers ‘read’ the paintings independently, based on their individual sensibilities.

In the next stage, Tagore focused completely on human faces, and this is the most extensive and significant period of his works. It is here that he comes into his own as an artist. The faces, poignant and full of pathos, show how intuitive Tagore was about the human condition, connecting human appearances to core emotions.

Particularly poignant among these are his images of women, which are not quite portraits. As Mulk Raj Anand, acclaimed writer and critic once said,

“Their gentle eyes and melancholy faces are half opaque…The pain has ceased but the pathos lingers.”

The moods revealed by these faces are diverse, from melancholic, mysterious and menacing to melodramatic and romantic. One face that particularly left a mark on Tagore was that of his sister-in-law and childhood companion, Kadambari, who committed suicide at the age of 26 and on whose passing he lamented, “She, my queen, has died.” Many critics see her reflection in the melancholic faces he drew.

In the early 1900s, Tagore also lost his wife and two children prematurely and in quick succession. This not only made him more introspective about life but also question the longevity of his work. Surprisingly, he seemed to believe that art would be a more lasting legacy than literature. He once told fellow writer and artist, Rani Chanda,

“We who have trained in lyric should know that these will not find acceptance at another time. This is inevitable. So I often think that only painting has a deathless quality.”

Today, we can safely say that his poetry and prose have stood the test of time as has his art.

Amazingly, Tagore’s love affair with art didn’t stop with his genius brush strokes; he also played an important role in transforming Indian art. He did this first as a patron, by encouraging his nephews, Gaganendranath and Abanindranath Tagore, in the new art movement they were trying to launch, a movement that juxtaposed an Indian aesthetic and sensibility against formalised Western training. He became one of the biggest proponents of this thought process and the influences can be seen in his own work too.

To promote art, Tagore also opened up his home to young artists, and started the ‘Vichitra Club’ at his home in Calcutta. Unfortunately, it folded sooner than he would have preferred. He further fulfilled his dream of supporting art and art education with a native ethos by creating the Kala Bhavan at the Visva Bharati University in 1919. He also invited some of the most significant artists of the time to set up the art school, including Nandalal Bose, another Navratna. Kala Bhavan remains one of the pre-eminent art schools in India today.

Tagore was also the first Indian artist to exhibit his works in the Western world, and he displayed his work across Russia, Europe and the United States in the 1930s. The exhibitions, mounted with the support of Argentinian intellectual Victoria Ocampo, brought global attention to contemporary Indian art in the early 20th century and helped form its identity.

One  of his abstract creations|Victoria & Albert Museum

Imagination played a far greater role in Tagore’s art than skill, and one can see a shift in Indian art from these academic renditions to a more imaginative form from his time onwards. It moved from the fetters placed on it by rigid Western education and formed its own ethos, in no small measure due to Tagore’s influence both as an artist and as a patron.

While his interest in art may have had a long gestation, it was monumental when it did come into its own. It is a testament to Tagore’s sheer greatness that with an activity he called an “infatuation”, he contributed much more in less than two decades than most of us can achieve in a lifetime. 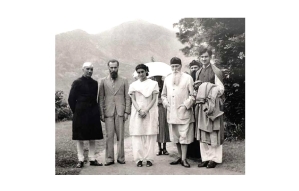 Poet Bengal Paintings Poetry Tagore Nobel Prize Landscape Sketches
You May Also Like
Amazing India
Khusro Bagh: In Memory of Akbar’s Favourite
By Kritika Sarda
Khusro Bagh is the only memorial of the favourite grandson of Akbar, who could have been the Emperor of India
Amazing India
The Old Goddess of Lothal
By Krutika Haraniya
Lothal, a mighty port 5000 years ago, is home to a temple dedicated to the ‘Goddess of the Sea’
History Daily
Shaniwarwada: ‘Curse’ of the Peshwas
By Akshay Chavan
Shaniwarwada in Pune was once the seat of the powerful Peshwas of the Maratha Empire
Amazing India
The Fort with a Mathematics Milestone
By LHI Team
Till Recently, the World’s Oldest Inscription of Zero
Support
Support
Each day, Live History India brings you stories and films that not only chronicle India’s history and heritage for you, but also help create a digital archive of the 'Stories that make India' for future generations.