Rajgriha and the Start of an Empire

For nearly 1000 years, since the time when Udayin, the king of Magadha and son of Ajatashatru decided to shift his capital to Pataliputra, present-day Patna in the 5th century BCE, the city acted as a capital and power centre. But the seeds of ambition, that would make this region a political base for centuries ahead, was laid elsewhere, in the pristine city of Rajgriha, surrounded by hills, which the Buddha loved and where Jain Tirthankara Mahavira too spent many summers.

Rajgriha, the first capital of Magadha, was one of the earliest cities of the Gangetic valley. It marked a society in transition as old lineage-based community ties gave way to territorial states and kingships across the Ganga-Yamuna Doab.

The political ambitions of Magadha and its gradual dominance during the period was bolstered by economic prosperity and technological innovations. And the fortified city of Rajgriha formed its core.

Even today, you can see the multiple phases of fortifications of this old city and it provides an archaeological treasure of remains. There are also rich references about the city in Buddhist texts. 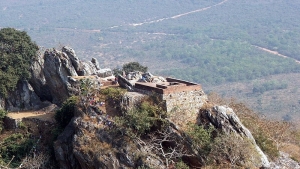 Rajgriha may be lesser known than Pataliputra, but it has a lot more to show of its glorious past. In Patna on the other hand, the once-great Mauryan palace complex lies buried under a modern park.

The transition of Magadha from a semi-nomadic, lineage-based society to an age of a full-fledged monarchy sowed the seeds of the great empires that would dominate the history of the subcontinent. The first, Magadha was a kingdom built around a strategically located capital and power centre. Economic prosperity and the social churn it came with, created a new upwardly mobile populace, ready to embrace new ideas.

Early Buddhist and Jaina literary sources are rich with references about everyday life in this capital as wealthy gahapatis (businessmen) made their way through market areas located near ‘gateways’. With the Ganga and Son rivers flowing close by, the land was blessed - agriculture prospered and mineral resources abounded. Riches brought jobs, opportunity and prosperity. Old caste equations were challenged and the new emerging populace - became the biggest patrons of Buddhism and Jainism.

Common depictions in almost all texts indicate Rajgriha was a heavily populated kingdom, rich in cattle, abundant in water, inhabited by the four varnas or classes and having prosperous trade. Rajgriha was thus the core of a kingdom that was ideal for the founding of an empire.

While excavations have unearthed settlements going back to 1000 BCE in Rajagriha, most historians agree that Bimbisara (558 BCE - 491 BCE), a contemporary of the Buddha, established new Rajgriha. He also laid the seeds of expansion - strengthening his power by marriage alliances northward and westwards including in Kashi.

Surrounded by high mountains in all sides and rivers flowing through Rajgriha, fits the description of an ideal ‘mountain fort’ according to Chanakya’s Arthashastra

There is evidence of two settlements, the old and the new here. The old has two layers of walls. The older of these is a heavy mud and gravel wall (now called the cyclopean wall) built over the hills surrounding the city for about 48 kilometres.

Archaeologist BR Mani described it as an archaeological marvel. He wrote ‘Of immense size, one can't but wonder how many people would have worked to create it.’ What is also amazing is the fact that these massive 1-1.5 meter stones were put together in the pre-Mahajanapada period (roughly before the 6th century BCE).

The highest walls are at what is called the Banganga Pass, an important geopolitical point of access into the city. The capital was also protected by the Barabar hills near it.

The inner mud-and-gravel wall of old Rajgriha is almost 8 kilometres long. The actual significance of these two fortifications and area inside requires further archaeological work.

While dates vary - as does opinion, on what constitutes the old Rajgriha, and what is the new, archaeologists and historians agree that the site broadly falls into two periods - the pre-6th BCE to the 3rd BCE - 1st BCE bracket. While a critical spurt in the building of fortifications and urbanism are suggested during Bimbisara’s era (6th century BCE), There was a second phase of urbanism coinciding with a similar wave across the Gangetic plain in the 3rd BCE and up to 1st BCE.

Ruins in the region|R. Venkatesh

Rajgriha was first discovered by the great Alexander Cunningham, founder of the Archaeological Survey of India in the 19th century. Greats like Mortimer Wheeler and R N Singh of the Banaras Hindu University have also given considerable detailing to the stretches excavated. Singh’s work indicates that there are clear indications of three phases of occupation, with terracotta figurines, Northern Black Polished Ware, and remains of ash and iron. Other important excavation discoveries were of the Jivakamravana monastery and of a long wall of large blocks of stone overlaid with red earth south of the road leading to the Griddhrakuta hill. A large terraced, brick stupa with circumambulatory path, with evidence of lime plaster, was found by archaeologist KK Mohammed recently along with other artefacts dated to the early Mauryan period.

Rajgriha also has its share of legends and tales. Go there, even today, and you will come across “Ajatsatru ka kila”, or the fort of Ajatashatru also commonly referred to as inner citadel walls. Oral tradition also links a nearby site of ruins to be Bimbisara’s jail, where the man who started the Magadha Empire was imprisoned by his son - Ajatsatru in the 5th century. Bimbisara probably died here.

Another important landmark in Rajgriha is the garden where the Buddha actually lived. He is said to have lived at the Venuvan, close enough to be part of the socio-political milieu at Rajgriha ,yet removed from it.

Ajatsatru, after the Mahaparinirvana (the passing) of the Buddha, convened the first Buddhist Council in the Saptarni cave in the suburbs of Rajgriha. There were 18 Mahaviharas repaired by him as well.

A stupa believed to be of Ajatshatru|R. Venkatesh

Rajgriha is one of the most important sites of the ancient world. But it is sad to see the state it is in. Its fortifications, most of which sadly lie unprotected are at risk. And unbelievable as it may sound, much of the area remains to be excavated.

A pity given that this may be our best window to a period that was epoch-making, in so many ways!

R. Venkatesh holds a post graduation in history from JNU. He is an active heritage enthusiast who travels extensively to several heritage sites and publicly shares his photographs and posts on his twitter handle @heritage_sites. He is a management executive in the banking and finance sector.