It rose like a phoenix out of the ashes, quite literally. Situated in the city of Agartala is the exquisite Ujjayanta Palace, home of the Tripura royals and also a state museum. This delicate beauty was built in the late 19th century by Maharaja Radha Kishore Manikya of the Manikya dynasty, after a devastating earthquake flattened Agartala, the capital of Tripura. It went on to become a symbol of a modern phase in the Kingdom of Tripura.

You may not have heard of them but the Manikya dynasty of Tripura is one of the oldest continuously reigning dynasties of India. The exact date of its founding is shrouded in legend – the Rajmala, a 15th century chronicle of the kings of Tripura, traces the history of the dynasty to the Mahabharata. But, historically speaking, the dynasty is said to have been founded by Ratna Manikya in 1267 CE. The Rajmala claims he was the 145th ruler of the dynasty.

A view of Ujjayanta Palace|Wikimedia Commons

The capital of Tripura was the city of Udaipur (51 km from Agartala), situated on the banks of the Gomati river, till 1760. However, constant attacks by the Nawabs of Bengal and political intrigue led to the shifting of the capital to Agartala by the Haora river.

The beginning of the 19th century was a politically sensitive time in the region and, in 1809, Tripura became a British protectorate. And, in 1838, the rulers of Tripura were recognised as sovereigns by the British. This ushered in a period of stability in the state. The rulers were forward thinking and keen to develop institutions, and they were also greatly influenced by British systems, adopting many of their practices.

The ruler who dominated this period of Tripura’s history was Maharaja Bir Chandra Manikya, who ascended the throne in 1870. He brought about many administrative reforms, which streamlined the functioning of the state. He carried out many social reforms like the abolition of slavery in Tripura in 1879, and the practice of sati in 1888. He set in motion the urbanisation of Agartala in 1862 and established the Agartala Municipality in 1871.

Maharaja Bir Chandra was also a patron of the arts, literature and culture.

He was fascinated by photography and set up a personal photo studio and also started an Annual Photo Exhibition in Agartala. He supported education by establishing the Umakanta Academy, the first Western-style school in Tripura in 1890, as well as the Birchandra Public Library in Comilla in 1896, shortly before his death.

His son Radha Kishore Manikya and grandson took his modern ideas forward and worked extensively to develop their state. Radha Kishore was a great friend of Rabindranath Tagore and supported him in setting up the Visva-Bharati University at Shantiniketan.

However, on June 12, 1897, a massive earthquake wrought havoc in Northeast India and decimated the city of Agartala. It registered 8.0 on the Richter scale and caused damage in Assam, Cooch Behar and Shillong, and shock waves were felt from Burma to Delhi. Much of Agartala was destroyed, including the royal palace.

A loan of Rs 10 lakh was secured from the Bengal Bank, through the influence of his friend, noted poet Rabindranath Tagore. It is said that it was Tagore who named the Palace ‘Ujjayanta’.

The architectural firm of Martin & Co of Calcutta was hired to design a grand palace that would serve as a symbol of new and modern Tripura. Construction began in 1898 and was completed in 1901.

A View of Ujjayanta Palace|Wikimedia Commons

Incorporating elements of Neo-Classical and Renaissance architecture, the palace is just two-storeys high and has three exquisite domes. It is surrounded by beautifully landscaped gardens with artificial lakes, fountains, geometric flower beds and walkways, inspired by the Mughal Gardens.

The Gardens at Ujjayanta|Wikimedia Commons

The main palace wing had reception rooms, durbar and banquet halls and other public spaces, while the royal family lived in different annexes. There were rooms whose interiors were decorated in either Persian, Oriental, European or Indian styles and served mainly as a private museum, a repository of the dynasty’s collection of paintings, objets d' art and rare oriental manuscripts.

One of the most interesting spaces was the Chinese hall, which as the name suggests was inspired by the Chinese aesthetic.

The palace also housed the Ivory Throne of the Tripura kings, which, according to legend, was gifted to them by the Pandavas! Within the compound and around it are several Hindu temples dedicated to Lakshmi Narayan, Uma-Maheshwari, Durga and Jagannath.

The Temples in the Palace Compound|Wikimedia Commons

Maharaja Bir Bikram Kishore Debbarman Manikya passed away shortly before Independence and the reins of the state were taken over by his wife, Maharani Kanchan Prava Devi, who acted as the regent for their minor son. She had to deal with some serious court intrigue, some of which tried to include Tripura in East Pakistan. She ultimately signed the Instrument of Accession with India, one of the few women who did so.

After the integration of the state with the Union of India, Ujjayanta Palace remained the residence of the Tripura royal family. However, most of it was acquired by the government in 1972 and it served as the state Legislature from 1972-73 to 2011. A portion known as Andarmahal has been retained by the royal family.

In 2011, the state Legislature moved out and in 2013, the palace became the home of the Tripura Government Museum. The museum has 22 galleries and showcases the art, culture, history, traditions and ethnic diversity of Northeast India. 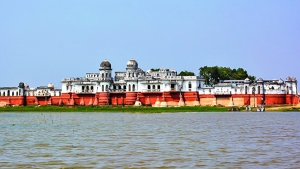 Neer Mahal: The Palace on the Vanishing Lake

The Ujjayanta Palace may have played many roles over time but it remains a symbol of the farsightedness and progressive nature of the Manikyas and an architectural marvel in the heart of Agartala.

Tripura palace Maharaja Bir Bikram Kishore Debbarma Manikya museum Tagore Agartala
You May Also Like
History Daily
Lumbini: The Birthplace of the Buddha
By Nehal Rajvanshi
Catch the story of Lumbini, one of the most important Buddhist pilgrimage centres in the world
Amazing India
Charminar: Hyderabad’s First Building
By Akshay Chavan
Recognised globally as a symbol of Hyderabad, the Charminar is a masterpiece of the Qutub Shahi dynasty
Tales & Trails
The ‘Mad’ King Murtaza | Tales & Trails
By LHI Team
A king of Ahmadnagar had had enough of his manipulative mother & conniving nobles, so he took a sabbatical
In The News
The Sundarbans: A Tale of Sahibs and Cyclones
By Deepanjan Ghosh
It all started with the East India Company and its relentless hunt for fresh revenue
Support
Support
Each day, Live History India brings you stories and films that not only chronicle India’s history and heritage for you, but also help create a digital archive of the 'Stories that make India' for future generations.