In 2016, the National Gallery of Australia returned to India a 3rd century CE stone panel titled ‘Worshippers of the Buddha’. The gallery had bought it for US$595,000 from the disgraced New York art dealer-cum-smuggler Subhash Kapoor, who is currently in a Tamil Nadu jail awaiting trial.

But what is the connection between the gesture by the Australian government and a sleepy village in Andhra Pradesh? The beautifully sculpted limestone panel returned by the Australian gallery had been stolen from the Chandavaram Buddhist Complex, one of the most significant Satavahana-era Buddhist sites in the southern state.

The stolen stone panel ‘Worshippers of the Buddha’|pib.nic.in

Located on the banks of the Gundlakamma River in Prakasam district, the Complex was discovered as recently as 1964 by a team led by Dr V V Krishna Sastry, former director of the Department of Archaeology and Museums.

Few realise that Andhra Pradesh is home to some of the most historic Buddhist sites in India. In fact, the region boasts more than 140 Buddhist sites, underlining the importance of the religion here, where it thrived under the Satavahana emperors, who ruled the Deccan from the 2nd century BCE to the 2nd century CE.

Around the late 1st century CE, the Satavahanas shifted their capital to Dhanyakakata (Amaravati) from Paithan, and with them went scholars, traders and merchants. Apart from the great Amaravati Stupa, they built other great stupas as they moved, in places such as Nagarjunakonda, Jaggayapeta and Bhattiprolu, each at an important place on a trade route. The growth was further fed by gold from Rome. While these places attract tourist traffic, many others have faded into oblivion. And Chandavaram is one of them.

Built on an ancient route from north India to Kanchipuram in the south, this area was a centre of continuous activity in the ancient times as can be seen from the presence of three-winged viharas, found during the excavations in the 1970s. Also unearthed were an astonishing number of artefacts like sculpted slabs, Satavahana coins and Brahmi inscriptions.

Photograph taken in the 1970s during the excavation|wikimapia.org

But what makes this complex stand out is its main stupa, the Chandavaram Maha Stupa as it is called, built on a double-terraced, elevated platform with a striking and unique dome. The only other stupa of its kind in India is the spectacular one at Sanchi in Madhya Pradesh.

It is also one of the largest stupas in South India and is decorated with limestone panels depicting events relating to Buddha's life and teachings, including the great renunciation, the Bodhi tree, throne, pillar of fire and Dharmachakra. Here, the artisans have used huge rectangular stone slabs to carve scenes from Buddhist mythology, vertically, in different compartments, one above the other. 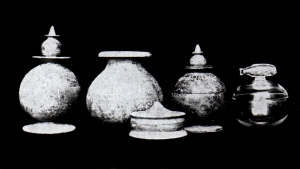 When they found Buddha’s Relics!

Interestingly, the absence of Ayaka platforms in the four directions with five inscribed pillars on each of them, like that at Nagarjunakonda, implies the prevalence of Theravada Buddhism in this area in the bygone era.

Over the centuries, with the decline in Buddhism, this grand site was completely forgotten. The real tragedy, however, is that before its excavation, this historic site was exploited for building materials by locals, eroding much of its original structure.

The complex has also been a hunting ground for smugglers of antiquities, as the panel returned by Australia demonstrates. That’s not all. The on-site museum, which housed excavated artefacts, was pillaged by thieves thrice between October 2000 and March 2001 and has remained shut ever since.

In 2015, the state government initiated a conservation effort here, hoping to bring the Chandavaram Complex into the Buddhist circuit of Andhra Pradesh, and offer tourists a reason to travel here.

The nearest airport is the Vijayawada International Airport (150 km) . Nearest railway stations are Donakonda and Ongole, which are connected to major cities in India. Within Andhra Pradesh, regular buses run to Chandavaram via Ongole.