Patan in north Gujarat is famous for its Patola sari, gorgeous 11th-century stepwell Rani-ki-Vav and Sun Temple at Modhera nearby. Once the capital of the Solanki kings, from the 10th to 13th centuries, there’s another reason this town attracts tourists and historians alike – the sacred Sahastralinga Talav or ‘the tank of a thousand lingas’, situated just near the famous stepwell.

The talav is more than just a beautiful ‘tank’. It is an elaborate water management system consisting of canals, channels, sluice gates, a natural filtration system and other hydraulic structures in brick and stone spread across 7 hectares. A delicate blend of technology and artistry, much of the tank complex is yet to be excavated and what has been uncovered, even if in ruins, will take your breath away.

Ruins of the tank|Harsh Shah

The region’s dry climate due to its proximity to the Thar Desert and the Rann of Kutch made water especially valuable here. As a result, various hydraulic systems were constructed across the region in ancient times, and these reservoirs were called kunds, talavs or sarovars depending on their size.

The famous Kankaria Lake in Ahmedabad, Munsar Lake in Viramgam, Gopi Talav in Surat and Hamirsar Lake in Bhuj are all parts of medieval water storage and management systems that dot modern-day Gujarat. Among them is Sahastralinga Talav, which is decorated with sculptures of deities and once even a thousand lingas.

The modern city of Patan was once the medieval city of Anahilapataka or Anhilwara founded in 745 CE by Vanraj Chavda along the banks of the Saraswati River (not to be confused with the mythical Saraswati River in Northern India), which originates in the Aravalli hills.

The city was the capital of Gujarat for 650 years, from 745 to 1411 CE, and was ruled by a succession of dynasties – the Chavdas, the Solankis, and finally the Vaghelas. It was under Solanki rule (942-1244) that Anhilwara developed as a centre of trade, learning and architectural achievements.

It was also a thriving centre of Jainism, and the Solanki rulers commissioned a large number of Hindu and Jain temples, other religious structures as well as civic works. However, it was during the rule of Siddhraj Jayasinh (1092-1142 CE) that Anhilwara reached its zenith.

Jayasinh was known for his numerous military expeditions, which not only brought immense wealth to his capital but also brought all of Saurashtra under his rule, thereby unifying what is now modern-day Gujarat. He patronized poets and scholars and made his kingdom a centre of learning and literature.

Ruins of an old Shiva temple in the area|Harsh Shah

Anhilwara flourished so much that noted urban historian Tertius Chandler in his study Four Thousand Years of Urban Growth (1987) estimates that it was the tenth-largest city in the world in 1000 CE, with a population of around 100,000.

To meet the water needs of the ever-expanding city of Anhilwara, advanced hydraulic systems were developed to ensure continuous water supply even during dry months. One of these was the Sahastralinga Talav commissioned by Jayasinh. The talav, just like the other tanks built elsewhere in the kingdom, drew water from the Saraswati River via an ingenious network of channels that ultimately connected the river to the reservoir.

There is an intriguing legend surrounding the talav, according to which Jayasinh fell in love with a married woman named Jasma Odan, who belonged to the Od community which traditionally excavated ponds and tanks in the region. As the king’s men chased her, she committed suicide to save her honour but cursed the talav, the king’s pride, saying it would never be filled with water.

The curse was so powerful that it had to be countered by a human sacrifice!

After thriving for 300 years, Anhilwara’s glory days finally came to an end. During the Vaghela rule, towards the end of the 13th century, Ulugh Khan, commander under Alauddin Khilji, plundered the city and destroyed it completely. With the seat of power shifting to places like Ahmedabad and Champaner in the 15th century, Anhilwara and the talav fell into decline.

Marking this period was an important historical event that unfolded at the talav – the assassination of Bairam Khan, guardian and mentor of Emperor Akbar and commander-in-chief of the Mughal army. Khan was killed on the banks of the talav after a boat ride in 1561.

Scattered across the area that comprises the Sahastralinga Talav are many monuments, most of them dilapidated but their beauty undiminished. Let us explore some of these.

In the centre of the tank complex is a large ruin, with an octagonal rauza (translate) built of bricks. Popularly known as Rani no Mahal, not much of the structure remains.

As the gates of the channels were not strong enough to alter the course of gushing water, a kund had to be constructed. This reduced the water’s pressure, thus helping to divert it to the channels, before it flowed into the talav.

The three inlet sluices were named Ganga, Yamuna and Saraswati, together forming the Triveni Tirth.

A tomb in the area|Harsh Shah

During the late 17th and early 18th century, there was much uncertainty prevailing across the subcontinent. As a result, the talav, like many other monuments, was neglected. Lack of repairs to its embankments, its network of channels and other hydraulic components that fed the tank began to crumble.

The destruction of the forests for agriculture, along the western edge of the talav, contributed to its decline as sand particles began to bury a large part of its bed. The rest was taken over by agricultural fields. 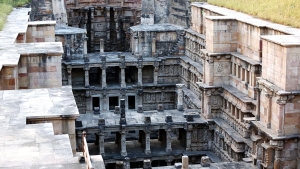 Thankfully, now protected by the Archaeological Survey of India, Sahastralinga Talav is growing in popularity among visitors who throng Patan and Modhera. Even though in ruins, it is still a delight to visit, tempting visitors to peep into the rich and glorious history of a forgotten dynasty.

Harsh Shah is a practising architect from Mumbai with interest in ancient architecture history and conservation.

Mughal Architecture Gujarat Water Management Patan tank
You May Also Like
Amazing India
Aurangabad Caves: Ajanta’s ‘Cousins’
By Deepanjan Ghosh
On the outskirts of Aurangabad is a cave complex that is related to the Ajanta caves – and few even know of it.
Amazing India
A Mumbai Church and its ‘Afghan’ Connection
By Aditi Shah
A church that honours soldiers who lost their lives in a deadly game of one-upmanship between two great empires
Amazing India
Mubarak Mandi - Once Jammu’s Grand Palace
By LHI Team
Catch the drama and intrigue that played out in its precincts
History Daily
Shyamlaji Temple in Gujarat: What Lies Beneath?
By Kurush Dalal
The town of Shyamlaji in Gujarat, whose main draw is a 400-year-old Vishnu temple, is an important pilgrimage site.
Support
Support
Each day, Live History India brings you stories and films that not only chronicle India’s history and heritage for you, but also help create a digital archive of the 'Stories that make India' for future generations.