The town on Mahabaleshwar in Maharashtra is synonymous with rolling hills, enticing valleys, plunging waterfalls and, of course, strawberries. Once the summer capital of the Bombay Presidency, many still head to this hill station to beat the heat of the plains. At a height of 4,439 feet above sea level and only 270 km from Mumbai, it is a perfect summer retreat.

But few know the quaint stories that make Mahabaleshwar a town of great history. From its ancient temples, to its central peth or quarter named after a Governor-General, to the convicts who farmed here, this place packs quite a punch!

For starters, Mahabaleshwar is a place of fantastic legends. And that is not surprising because it is from the Western Ghats here that the mighty Krishna river rises and travels all the way across peninsular India, to drain in Andhra Pradesh.

The view of Mahabaleshwar|Wikimedia Commons

According to legend, Lord Brahma performed the penance required for the creation of human beings and life itself, in the forests here. While deep in meditation, two local asura brothers – Mahabali and Atibali – tried to terrorise him. When things got out of hand, Lord Vishnu came to Brahma's rescue and Atibali was killed. But even Lord Vishnu could not hurt Mahabali as he had the boon of ichhamrityu (death by one’s own will).

So Goddess Mahamaya was called in to help. She was so beautiful and charming that she enchanted the demon. Overwhelmed, Mahabali vowed to grant her a favour. Waiting for this moment, Mahamaya asked for his death. Mahabali felt compelled to submit to her will but, as his last wish, he asked his name be attached to Lord Shiva and the place be known by it. This is how Mahabaleshwar was created.

The recorded history of Mahabaleshwar goes back to 1215 CE, when Yadava King Singham of Devagiri visited this place.

He is believed to have built a temple as well as a small tank at the source of the Krishna river. Interestingly, this part of the Deccan Trap, the typical terraced landscape in the region, has underground caverns which hold the river’s water and give rise to springs.

After the fall of the Yadava dynasty in the early 14th century, the region was ruled by a succession of kingdoms. These included the appointees of the Muslim rulers of Delhi, the Bahamanis, and the splinter kingdoms that emerged from the Bahamani empire, mainly the sultanates of Bijapur and Ahmednagar.

The Nizam Shahs of Ahmednagar appointed a local family of Shirkes as caretakers of Mahabaleshwar and they enjoyed great power. But when things soured between the caretakers and their lords in Ahmednagar, the Nizam Shah was quick to replace the Shirkes with another local Maratha family, the Mores. Over time, the family gained prominence and were granted the title of Rajas of Jaoli and Mahabaleshwar. They are said to have ruled for 7 generations.

Mahabaleshwar was subsequently tossed between kingdoms as power equations constantly changed in the ensuing years, from the Peshwas to the Rajas of Satara. But in the 19th century, Mahabaleshwar received a fresh lease of life, quite literally.

Pratapgad, built by Chhatrapati Shivaji when Mahabaleshwar was under him|Wikimedia Commons

It is believed that the first European to set foot on the hills of Mahabaleshwar was General P Lodwick, who had heard about the ‘boundless beauty’ of this place. He explored the region in the summer of 1824, literally making his way, with a walking stick in hand, through the dense forest on the edge of a grand precipice, which was ‘crawling with tigers’.

It was he who made Mahabaleshwar popular among the British. On his return from Mahabaleshwar, he wrote a letter to the newspaper, the Bombay Courier, describing the region’s “healthy and happy” environment and how it was contradictory to the Indian heat.

The grand and romantic scenery, he wrote, reminded him of ‘good old England’.

Memorial point in Mahabaleshwar setup in honour of Lodwick|TripAdvisor

This, perhaps, encouraged the famous Reverend Gordon Hall, founder of the American Mission in South India and author of the Marathi translation of the New Testament, to travel here.

A year later, in 1925, Mahabaleshwar received another prominent visitor, the Resident of Satara, Colonel Briggs. He recognised the potential of Mahabaleshwar as home to a sanatorium for European invalids in India. This was a time when ‘retreating to the hills’ was gaining momentum among British officers as they were scouting for cooler climes to escape from the scorching Indian summers. Bengal had access to the Himalayas and Madras laid claim to the Nilgiris. This prompted the British in Bombay to investigate the Western Ghats for places of refuge.

Briggs was very impressed by what he found and even went to the Raja of Satara and convinced him to build a good road to Mahabaleshwar for better communication. In 1826, Briggs erected a small cottage for his family, and his son came to be called ‘Chhota Briggs’ by the locals.

His extensive and ‘glowing’ report on the virtues Mahabaleshwar to the Medical Board of Bombay persuaded the Governor of Bombay, Sir John Malcolm, to visit the hill station in May 1828.

He was welcomed with a grand reception by the Raja and they agreed to develop Mahabaleshwar. Sir Malcolm became so attached to the place that he even got the Raja of Satara to exchange the town for the village of Khandala, also in Starara district near Wai in Maharashtra.

Considering Malcolm’s great personal interest, the Raja agreed. He also wanted to constitute Mahabaleshwar into a separate pettah (a small taluka) for administrative purposes. The Governor, in gratitude, expressed his wish to call the new village after the Raja, but the latter insisted on naming the new place after Sir John Malcolm instead! Thus, an entire area in Mahabaleshwar came to be called Malcolm Peth, a name that has stuck till today.

Next year, in 1829, Mahabaleshwar was officially declared as Bombay Presidency’s summer capital.

Grants were issued for the construction of public buildings and the next decade was one of prosperity and advancement for Malcolm Peth, thanks largely to the visionary colonial administrator, Sir Bartle Frere, who was later appointed Governor of Bombay. It was Frere who, as the Resident of Satara, attracted the likes of Bombay’s leading men Dr Bhau Daji, Sir Jamsetjee Jeejeebhoy, Cowasji Jahangir, David Sassoon, etc to visit Mahabaleshwar. Eventually, most of them, prosperous from the cotton export trade, bought properties here. 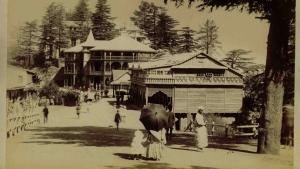 Shimla: History Was Made Here

These business tycoons, many of them wealthy Parsis, enriched the local community with their philanthropy. For instance, Sir Morarji Gokuldas, a Bombay merchant, financed the construction of a hospital. It was in his house that Mahatma Gandhi stayed in, in 1945, during a trip to Mahabaleshwar. Framji Nasserwanji Patel provided a dharamshala for travellers.

Reminders of Mahabaleshwar’s rich colonial past are still visible in its temples and bungalows, some ruined and some preserved, which dot the hill station, which continues to lure tourists with its magnificent waterfalls and forests just as it did 200 years ago.

Strawberry cultivation was introduced by convicts from China and Malay imprisoned by the British in Mahabaleshwar from 1834 to 1864. These convicts were encouraged to plant potatoes, English vegetables and berries in the fields, and when they left, these gardens were occupied by the locals.