Just 100 km east of Allahabad, on the banks of the Gomti river, lies the forgotten city of Jaunpur, known in history as the seat of the mighty Sharqi Sultans. Named after the controversial Delhi Sultan Muhammad Bin Tughlaq, whose real name was Jauna Khan, the city went on to become the capital of the Sharqi dynasty founded by a eunuch.

Jaunpur offers ample clues to its rich history in the many exquisite monuments that dot the town. Forgotten by most people now, Jaunpur was also once an important seat of Islamic studies, a centre of the Ganga-Jamuni culture and a place held in awe by many.

Jaunpur’s history can be traced back to the Vedic Age. Legends testify that Rishi Jamadagni lived in the forests of this region and made it his Tapasthali. According to Hindu beliefs, Rishi Jamadagni was one of the Saptarishis or ‘seven great sages’ of Hindu civilization. Lord Parashuram (the sixth incarnation of Lord Vishnu) was Rishi Jamadagni’s son. His ashram exists to this day in Jaunpur and has been converted into a popular temple.

The fate of Jaunpur was about to change when an African slave-eunuch, Malik Sarwar, was gifted to Prince Muhammad, the son of Feroz Shah Tughlaq, in whose service he rose to become the chief of eunuchs and controller of the elephant stables. Malik Sarwar was notorious as the lover of Sultan Feroz Shah’s daughter and, therefore, in 1393 CE, Muhamad Shah Tughlaq sent him away from the court and made him governor of the eastern provinces, which had their seat in Jaunpur.

In 1394 CE, taking advantage of the chaos created by the war of succession after Feroz Shah Tughlaq’s death, Malik Sarwar declared his independence from the Delhi Sultanate and took the title of Khwaja-e-Jahaan Malik-us-Sharqi (‘chief eunuch of the world, Lord of the East’). That same year, together with his adopted sons, Mubarak Shah and Ibrahim Shah, he founded the empire of the Sharqi Dynasty. 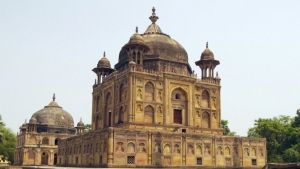 The Remnants of Akbar’s Ilahabas

The Jaunpur Sultanate extended from Itawa in the west to Lakhnauti (Bengal) in the east, and from Vindhyachal in the south to Nepal in the north. During the Sharqi period, the Jaunpur Sultanate was a strong military power in North India, and on several occasions even threatened the Delhi Sultanate.

After Alauddin Khilji’s wazir, Malik Qafur, it was Malik Sarwar who was another slave eunuch whose capabilities made him reach unprecedented heights in medieval India. In fact, it wouldn’t be wrong to claim that Malik Sarwar surpassed all his predecessors and achieved a distinct place in history by being the only eunuch to establish his own dynasty of Sultans.

The Jaunpur Sultanate was a major centre of Urdu and Sufi knowledge and culture.

Grand mosques were built by the Sharqi Sultans and huge madrasas were attached to them which made Jaunpur the seat of Islamic education. It was known for its excellent communal relations between Muslims and Hindus, perhaps stemming from the fact that the Sharqis themselves were originally indigenous converts to Islam, as opposed to the descendants of Persians or Afghans.

Sharqis gave Jaunpur some jaw-dropping monuments and Sharqi architecture has characteristics that are distinct from the Delhi style. It was a perfect amalgamation of Hindu-Muslim architecture. Although the Mughals devised a similar style in later centuries, the Sharqi style never returned after the fall of the Jaunpur Sultanate.

Also known as Kerar Kot, the Shahi Qila of Jaunpur was constructed on the banks of the Gomti river, on the orders of Feroz Shah Tughlaq by his step-brother, Ibrahim Naib Barbak, in the 14th century CE. Shahi Qila was conquered on many occasions by the Sharqis, Lodhis, Mughals and the British. A major part of the fort was built in the 14th and 15th centuries under the Sharqi Sultanate. The fort saw major renovation work in the late 16th century, during the reign of Mughal Emperor Akbar, when Munim Khan was made the chief of Jaunpur.

Shahi Masjid and the pillar of Ibrahim Shah|Akshat Lal

Jaunpur’s oldest mosque is inside the fort. It was built by Ibrahim Naib Barbak and has Buddhist and Bengali elements in its architecture. The tall pillar raised near the mosque in 1395 CE marks the celebrated reign of Sultan Ibrahim Shah, under whom the Sharqi Sultanate reached its zenith.

The other pillar was installed by some Qila Kotwal in 1769 CE. It has a 17-line Persian inscription which reflects the communal harmony of Jaunpur. The inscription can be translated as,

"I administer oath to a Muslim in the name of God and His prophet; and if he is a Hindu, I give him the oath in the name of Ram, Ganges and the Triveni Sangam. If he does not act upon this deed, he will be cursed by God and his Prophet and if God wishes, his face will be blackened on the Resurrection day, and he will go to Hell."

Another structure built inside the Jaunpur fort is the Bhool Bhulaiya. In reality, it was a Turkish hammam built under the Sharqi Sultans and had provisions for hot and cold underground water supply. The passage to the hammam was so confusing that it came to be known as ‘Bhool Bhulaiya’.

This mosque stands on the same site where the celebrated temple of Atala Devi built by the Rathores of Kannauj once stood. The temple was demolished by Ibrahim Naib Barbak in 1364 CE and the construction of the mosque began in 1377 CE, on the orders of Feroz Shah Tughlaq. The mosque was completed under the reign of Sharqi Sultan Ibrahim Shah in 1408 CE. There was a separate cloister for women to pray. A madrasa named Madrasa Deen Dunia is housed in the central courtyard of the mosque.

The main façade of the mosque is built in typical Sharqi style, with an outreaching arch built taller than the dome. There are no minarets in Sharqi-style mosques. The pillars in the courtyard of the mosque testify to the existence of a temple before the construction of the Atala Masjid. The voussoirs are heavily carved with inscriptions from the Sharqi period.

This mosque was built by Sultan Ibrahim Shah in reverence to the great saint, Saiyyad Sadr Jahan Ajmal. The mosque stands at the site where the temple built by Vijay Chandra, called Muktaghat, once stood. The mosque is known for its intricate lattice work and detailed pylon.

The mosque was destroyed by severe floods on the Gomti and what is left of the grand shrine is just its main façade, which holds screens that are carved heavily in stone.

This mosque was constructed by Queen Rajye Bibi, wife of Sultan Mahmud Shah, eldest son and successor of Sultan Ibrahim Shah. The mosque was built in typical Sharqi style in 1447 CE and it is dedicated to Sufi saint Sayyid Ali Dawood Qutbuddin. It was the queen’s private mosque and she established a school or madrasa around the mosque which exists to date. It was named Jamia Hussainia.

Although no red building materials were used inside the mosque, the shrine got its name because its main gateway has been painted red ever since it was built.

Also known as Badi Masjid, the Jama Masjid of Jaunpur is the largest Friday-congregation mosque in the city. It was built during the reign of the last Sharqi Sultan, Hussain Shah, between 1458 and 1478 CE. The pishtaq and iwan of the mosque are made in typical Sharqi style, where the pylon has an arch that soars upward without restriction. The mosque is built on a raised plinth and the main façade has intricate work with elements borrowed from Hindu architecture as well.

In 1478, Hussain Shah reached the banks of the Yamuna and challenged the Delhi Sultanate, which was then ruled by Sultan Bahlol Lodhi. After three successive battles, Bahlol Lodhi finally defeated the Sharqis and thus began the downfall of the Jaunpur Sultanate. In 1479, the Sharqi Empire lost Jaunpur and Hussain Shah fled to Bengal.

The graves of most of the Sharqi sultans and their nobles are close to the Jama Masjid. The tombs must have been an architectural marvel before they were sacked by Sikandar Lodhi, who destroyed the city of Jaunpur after the fall of the Sharqi Sultans.

The Victory of Emperor Akbar over Ali Quli and Bahadur Khan at the Gomti River, Jaunpur, 1561 CE, painted by court artist Kanha in 1590-95 CE, from Akbarnama

After the accession of Akbar to the throne of Agra in 1556 CE, the Afghans and Uzbeks in India started revolting against him. Ali Quli Khan Zaman and Bahadur Khan were two Afghans who created political upheaval in the Kara-Manikpur region. After many such attempts, Akbar personally commanded his troops to Jaunpur and suppressed the revolt by killing the Afghan rebels in 1561. He installed Mughal noble Munim Khan as the chief of Jaunpur. It was in 1583 CE that Akbar amalgamated Jaunpur with the subah or province of Allahabad.

To mark this victory over the Afghans, Munim Khan started building the Shahi Bridge at Jaunpur. The bridge, also known as Akbari Bridge, was completed in 1567 CE and was made in Mughal style with pillared arches supporting the road. The bridge suffered serious damage during the 1934 earthquake and seven of its arches had to be repaired to bring it back to use. This bridge is a prime Mughal structure in the city.

In the 18th century, Hindu Brahmins of Jaunpur rose to prominence when Shiv Lal Dube grew up to become the banker of Nawab Kalb Ali Beg. In 1796, he was bestowed the title of ‘Raja Bahadur’ and his sons owned most of the estates in the region. Their palace still stands in Jaunpur and reminds us of the age of Taluqdars and Zamindars of the United Provinces. In 1779, the British annexed Jaunpur under the Permanent Settlement and the modern district of Jaunpur came into existence.

The Palace of the Raja of Jaunpur|Akshat Lal

Jaunpur is a living witness to the rise and fall of the Sharqi Sultans. It has seen the heydays of the Delhi Sultanate and Mughal era as an important seat of culture and education. Jaunpur was so rich in its culture that Emperor Shah Jahan compared it to the cultural capital of Persia and designated it with the title of Shiraz-e-Hind or Shiraz of India (Shiraz being the cultural capital of the Persian world).

In modern times, Jaunpur has suffered from neglect and apathy. Besides, natural calamities like floods and earthquakes have also been disastrous for the beautiful monuments in this city, and there seems to be no attempt by the Uttar Pradesh government to conserve them.

Contemporary historians claim that the tomb of Sultan Feroz Shah Tughlaq lies in the Hauz Khas Complex of Delhi, the same place which has a historic hauz (water tank or reservoir) built by Alauddin Khilji. If you ever visit Jaunpur, you will realise that there is one more tomb that is said to be the ‘real’ resting place of Sultan Feroz Shah Tughlaq. It is richly made up and appears to be a befitting place for a Sultan. The tomb is a protected monument under the Archaeological Survey of India.

Akshat Lal, the founder of Allahabad Heritage Society, is a writer based in Allahabad and works for the conservation of the region’s heritage.

Uttar Pradesh Islam Mughal Architecture Heritage Monuments
Support
Support
Each day, Live History India brings you stories and films that not only chronicle India’s history and heritage for you, but also help create a digital archive of the 'Stories that make India' for future generations.